Knoxville's Branch Office of the Billionaire Boys Club has a new campaign to come up with $35,000,000 over the next five years to push forward the corporate reform agenda in East Tennessee.  Local Broadie, Supt. Jim McIntyre, has placed the first bug in the ear of Knox County taxpayers at a televised meeting at Fulton High School:


"You get that raise one time, but (it) continues in your base salary," he said during a community forum held at Fulton High School. "Knox County Schools is asking for a raise of $35 million and that's probably the simplest way to put this."

So if Knox County children and parents are the recipients of this $35,000,000 raise, they, too, are also the ones to pay for that raise. Simple, indeed.  Or simple-minded?

What is Slim Jim planning to do this "raise?"  Well, the biggest chunk and the largest increase by far will go to "strategic compensation," which is to say bonus pay for test scores.  (Knox County citizens should go here to download the research report from Vanderbilt University that shows no positive effect of bonus pay for raising achievement as measured by test scores.) That amount goes from $0.00 in FY13 to $11,000,000 in FY17, for a total of $27,000,000 over five years.  Another big increase will go to "technology," which means in Broadie talk, getting all schools wired to do year-round testing online, as envisioned by Broad/Gates and the rest of BBC.  And then there is the huge increase for instructional time, which translated means longer school days and/or school year.  That goes from $500,000 to $7.25 million over five years, for a total of $23 million.

If my math is right, these increases alone have just eaten up about $58 million.  Wonder what programs will be cut to pay for the amount in excess of the 35 million dollar "raise."  Stay tuned for announcements on the next public forum.  (Click chart to enlarge) 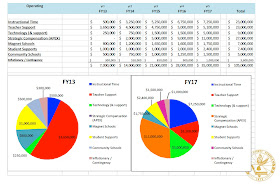