Out of School Time Learning, A Wolf in Sheep's Clothing 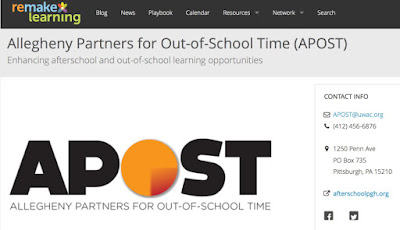 Digital education, pitched to parents as innovative, future-ready, and personalized, reduces student access to human teachers and builds robust data profiles that can be used for workforce tracking, behavioral compliance, and fiscal oversight. While adaptive online learning is a key element of the Ed Reform 2.0 agenda, it is not the only concern. Another issue that merits close attention is the push to expand “out-of-school time” (OST) learning programs.

Increasingly states are passing credit flexibility legislation where students have the option to earn school credit for activities that take place outside school buildings and without the direct involvement of a certified teacher; though teachers are often pressed to manage the associated paperwork with no additional resources. These are known as ELOs, extended, expanded, or enhanced learning opportunities. States with credit flexibility may also allow online classes to be considered for ELO credit. Even when not offered for credit, out of school time partners have stepped in to provide programs that have been intentionally and systematically stripped from the curriculum through the imposition of punitive austerity and accountability measures. Increasingly, student access to art, music, drama, creative writing, and enrichment activities, particularly in low-income and turnaround schools, is contingent on tapping into programs offered by community-based organizations (CBOs).

I’ve written previously about ELOs but wanted to raise the issue again after obtaining correspondence via an open records request to the Pennsylvania Department of Education regarding input provided on the development of the state’s new education plan as required by the Every Student Succeeds Act (ESSA). One letter stood out from the rest. You can read it HERE.


Click here to read the entire article.
at 12:05 AM No comments:

What Happened When Sister Betsy Spoke at an HBCU Commencement

Racist billionaire and Secretary of Education, Betsy Devos, thought she would smooth over some of Trump's more outrageous abuses of HBCUs when she went to speak at Bethune-Cookman's commencement.  I don't think she will make that mistake again.

Charters and vouchers have always been intended to break public schools, and wrest education away from the public commons. "School choice," a phrase coined by segregationists, has always been about maintaining and exacerbating segregation by race and class.

Graphic Essay: Betsy DeVos' 'School Choice' Movement Isn't Social Justice. It's a Return to Segregation. by Adam Bessie and Erik Thurman is a powerful piece that makes complex concepts easy to understand. It's a excellent thing to share with non-academics regarding the scourge of school privatization via charters-vouchers. I've included a quote and a teaser from the piece below.

Hoping to escape Competency-Based Education? Looks like Wyoming is your only option. 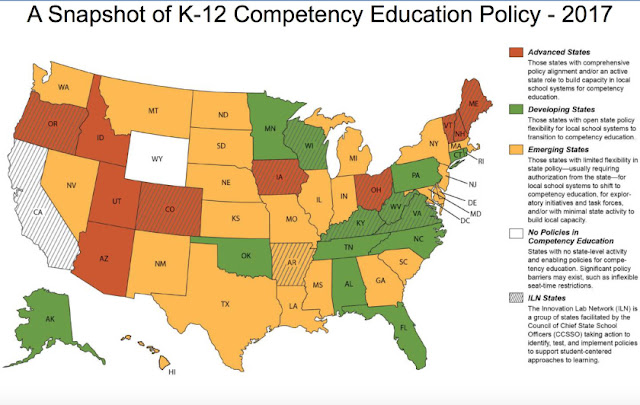 Last week Susan Patrick of iNACOL (International Association of K12 Online Learning) and Chris Sturgis of CompetencyWorks presented “An Overview of K12 Competency-Based Education for Education Leaders and Teachers.” The webinar and slides can be accessed here. Compare the slides below and consider the gravity of our situation.

The first (above) shows the reach of Competency-Based Education policies today. Only Wyoming remains untouched.

The second shows the reach of those policies in 2012. 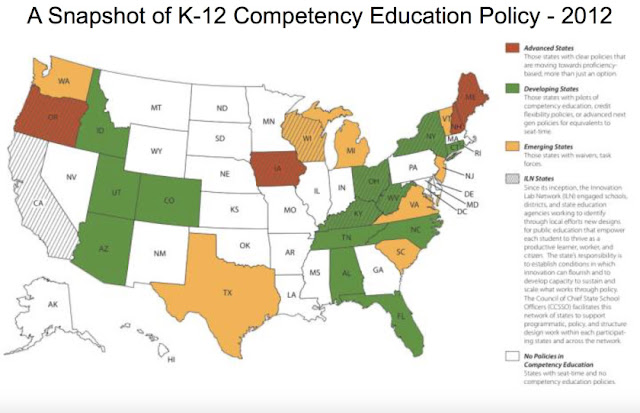 The Carnegie Corporation has signed on as a sponsor of iNACOL’s 2017 National Summit on Competency Based Education to the tune of $50,000. A list of 2016 sponsors can be found here.

In 2014 the Nellie Mae Education Foundation awarded a grant to “support iNACOL in the development of an integrated learning system that provides a platform for a school’s learning environment by enabling the management, delivery and tracking of student-centered learning and includes robust reporting and analytics capabilities.”

This week the University of Virginia’s Curry School of Education and Digital Promise are bringing hundreds of researchers, teachers, entrepreneurs, professors, administrators, and philanthropists to Washington, DC to collaborate on EdTech Efficacy Research. Click here for bios of working group members who will be finessing data analytics that will set the stage for widespread adoption of impact investing in public education.

With the Ed Reform 2.0 transition well underway, it is imperative that education activists familiarize themselves iNACOL’s operations. The organization’s 2014 tax filing states their mission is to “Ensure all students have access to a world-class education and quality blended and online learning opportunities that prepare them for a lifetime of success.” Susan Patrick, President and CEO, left her position as Director of the US Department of Education’s Office of Educational Technology in 2005 to launch iNACOL. While at the US DOE, she was the primary architect of the 2004 National Educational Technology Plan. Her LinkedIn profile notes she earned degrees in English and Communications and was employed as a legislative liaison and administrator of educational technology programs, but never taught or worked in a K-12 school setting.