When Diane Ravitch wanted her flock to be herded into supporting the federal charter school expansion legislation known as ESSA, she called upon Lamar Alexander's office to offer a nine-part spin session (see below) designed to mislead, obfuscate, and soothe any remaining skeptics. After all, Diane's support prior to ESSA passage was seminal in neutralizing early resistance to the new blueprint for Ed Reform 2.0.  The least that Alexander could do, as the Bill's co-sponsor, was to offer up his propaganda chief to help baffle any remaining ESSA doubters with tons of regulatory bullshit.

Though Diane's most recent ESSA campaign of political treachery essentially signaled the end of the Fall and Rise of the Reign of Ravitch, she continues to try to distinguish her own policy agenda from the neoliberal ed policies that her actions consistently support, even as she disavows them.  The most recent example can be found in her incessant lambasting of Billionaire Betsy as the educational anti-christ, when, in fact, Betsy DeVos serves as the perfect foil for Ravitch's long-time allowances for corporate welfare non-profit charter schools in her education ecosystem.

The biggest differences between Betsy and Diane is that Betsy likes any kind of privatization and is proud of it, while Diane has a selective criteria for draining public education funds with segregated charters, and she doesn't like to talk it--at all.  Ravitch would rather pretend, in fact, that she is leading the opposition, even if it directly down the rabbit hole.

Maybe, just maybe, Alexander's office can put to rest any skepticism that remains about Billionaire Betsy.  The temporary delay in her confirmation has not at all altered Alexander's enthusiasm for her eventual rise to power.  His office enthuses:


“Betsy DeVos is an outstanding nominee who has complied with all of the committee’s requirements and no one doubts that she will be confirmed as Education Secretary,” an aide to Alexander said. “This hearing delay is simply to accommodate the Senate schedule.”

Let's see now--how does that old saying go: a friend of my friend is my, what is it, now? 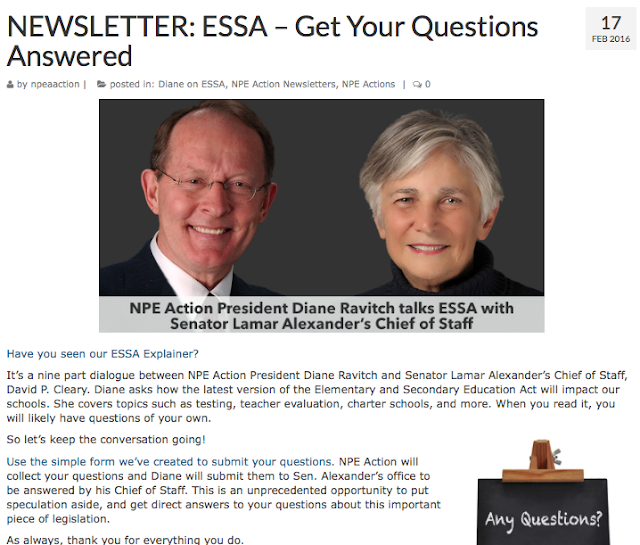