(CNN)The Wyoming Valley West School District in Pennsylvania sent out hundreds of letters this week telling parents who had lunch debt to pay or their children could go into foster care.
The letter, which was reviewed by CNN, told parents that there have been "multiple letters sent home with your child" and that no payments had been made.
"Your child has been sent to school every day without money and without a breakfast and/or lunch," the letter read. It also said failure to provide children with food could result in parents being sent to Dependency Court.
"If you are taken to Dependency court, the result may be your child being removed from your home and placed in foster care," the letter read.
CNN has reached out to Wyoming Valley West School District, but has not heard back.
at 10:30 AM 6 comments: 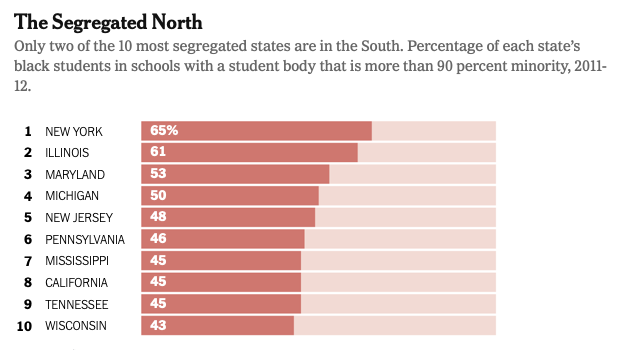 Gerald Coles Documents the Re-emergence of the Phonics Zombies

…it is the sign of a competent “crap detector” that he is not completely captivated by the arbitrary abstractions of the community in which he happened to grow up. Teaching as a Subversive Activity, p. 17

Midway through the first decade of this century's widespread reading instruction malpractice that was enforced by No Child Left Behind and funded by the corrupt Reading First program, the U. S. Department of Education released a long-awaited study that identified the most effective reading programs used in American schools.

The direct instruction and phonics zealots, who had seized control of the federal Reading First billions in 2002, could not have been more unhappy with the results.

The study, released by the What Works Clearinghouse, found that the balanced program known as Reading Recovery, which Bush II's chief reading ideologues had singled out as dangerously "non-scientific," was the only program in the study "found to have positive effects or potentially positive effects across all four of the domains in the review—alphabetics, fluency, comprehension, and general reading achievement:"


. . . .That program, Reading Recovery, an intensive, one-on-one tutoring program, has drawn criticism over the past few years from prominent researchers and federal officials who claimed it was not scientifically based.

Fortunately, Gerald Coles has once more activated his dedicated crap detection unit, which Coles has grown over the past 30 years for just such occasions. Coles has penned an astute synopsis of the current state of affairs in the latest not-so-great awakening of the phonics zombies, and it is a must read for everyone, whether or not you have read his very important book from 2003 on the hegemonic ideology of reading "scientists." Here's a clip from Cryonics Phonics: Inequality’s Little Helper:


. . . . As I noted at the beginning of this article, the new insistence that phonics-heavy reading instruction can provide the pathway to academic success, regardless of the poverty afflicting students, spotlights the beginning-reading program in Bethlehem, Pennsylvania. Reporting on the instruction in Bethlehem, journalist Emily Hanford insists that hundreds of scientific studies have “shown over and over that virtually all kids can learn to read,” if they are taught to read with a method in which “explicit, systematic phonics instruction” is central.

The 60-plus years of the resurrection and failure of phonics to overcome the impact of poverty on educational achievement leaves the question of the “science” purportedly supporting phonics. Can it be that phonics instruction does indeed have substantial scientific evidence favoring it, but it has not been deployed properly in the classroom?

It’s not apparent what “science” Hanford has in mind, but having written about the research on reading, learning disabilities, and dyslexia since the late 1980s, beginning with my first book, The Learning Mystique (1987), what’s clear about this so-called “science” is that much of it is contrived evidence to “prove” pre-existing conclusions. For example, Hanford is much taken with the research on dyslexia, which has searched for neurological dysfunction in beginning readers. However, she fails to consider the decades-long confusion in this research of correlation and causation. That is, the brain functioning of poor readers (“dyslexics”) is different from that of competent readers, but that is largely because of a difference in competence. Similarly, for example, readers able to read Czech will show brain functioning different from those who cannot, but that is not reason to brand the latter as “czechlexic.” (See my essay on the deficiencies of this research in “Brain Activity, Genetics, and Learning to Read” in Handbook of Early Childhood Literacy, Joanne Larson and Jackie Marsh, eds., 2012).

Hanford frequently references the “science” on the side of heavy-phonics-and-skills-instruction-for-reading-success, but offers nothing about the evidence on the other side of the dispute. Neither does she explore the purported “scientific evidence” the George W. Bush educators used to push through the mandated skills-based instruction, purportedly based on “the findings of years of scientific research on reading,” that subsequently failed children who were victims of it. (For a thorough review of this bogus “evidence” see my Reading the Naked Truth).

Joe Biden has said that "there are a lot of people who would say it [busing] hasn’t been the best remedy to integrate schools."  The people who say that, of course, are, like Joe Biden, opposed to busing, for whatever reason.  In the end, the reason does not matter because the documented racist result is the same, regardless of intent or motivation.

Whether Joe and the "lot of people" are correct in their claim that busing is an ineffective way to desegregate schools remains debatable, but the issue of busing presents us with at least one incontrovertible truth: those who have opposed busing have made significant contributions to the resegregation of schools.  That would include Joe Biden and anyone else whose intentions could be suspect or as pure as the driven snow.  The manifestations of racism are determined by policy talk and implementation, not by intentions.  We all know what the road to hell is paved with.

Richard Nixon, who was president when Joe Biden got started on the national political stage, knew that opposition to busing was an effective way to appeal to racists, both Southern and Northern, who were enraged by Lyndon Johnson's Great Society initiatives.  Anti-busing was an important piece of Nixon's "Southern Strategy," with Nixon going so far as to instruct his Attorney General, John Mitchell, to send him only Supreme Court candidates who were opposed to school busing.

Nixon got his conservative majority on the Court, which immediately went to work in 1974 dismantling, by a 5-4 vote, a busing plan in Detroit (Milliken v. Bradley) that was based on one in Charlotte, NC (Swann v. Charlotte-Mecklenburg Board of Education) that had been tested and found constitutional by the Supreme Court just a couple of years before.

First elected to the U. S. Senate in 1972, Joe Biden was watching all this unfold and making his own political calculations at the time.  Even if his heart might have been somewhere else, in the end Biden's words and deeds followed Richard Nixon and the racism he inspired:


Joe Biden, the youthful and telegenic senator from Delaware, also played an important role in this history. According to historian Matthew F. Delmont in his indispensable book "Why Busing Failed," Biden labeled busing a "bankrupt concept" that defied "common sense" and would go on to sponsor anti-busing amendments in the Senate. Biden faced the dilemma of Northern liberals of the era who generally supported national civil rights legislation, yet found themselves on unstable ground when these issues struck closer to home. Biden chose, like many of his political contemporaries, to be on the wrong side of history. In 1974, the year after Biden came to the Senate, the Supreme Court -- in Milliken v. Bradley -- struck down a busing plan in Detroit, saying it was "wholly impermissible" to bus white children who lived in the suburbs into inner-city schools to integrate schools.

As a result of the Milliken decision, the white rush to the suburbs picked up steam, and school desegregation efforts in subsequent years were further neutralized by court decisions and legislative efforts, like the stringent Senate bill introduced in 1975 by Jesse Helms and supported by Joe Biden.

The chart below is an update from data gathered by Gary Orfield. 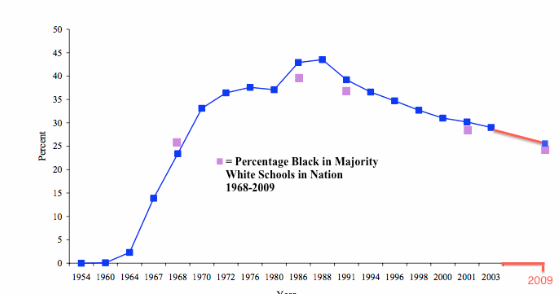 In a detailed analysis of busing's effectiveness (spoiler alert--it works), Nikole Hannah-Jones shows that Biden lied about his role in the anti-busing wave of the 70s and 80s:

After Mr. Nixon’s win in 1968, white Democrats were trying to hold on to their white voters. Mr. Biden favored busing for integration when he ran for election in 1972, but changed his mind seemingly because of a Delaware school desegregation case that was working its way through the courts. In his autobiography, Mr. Biden recalled his confrontation with a crowd of white constituents teetering on the brink of violence over the issue.
Mr. Biden flipped. Between 1975 and 1982, he teamed up with ardent segregationists in Congress, including Mr. Eastland, to support no fewer than five antibusing measures. Despite Mr. Biden’s recent claims that he only opposed busing ordered by the Department of Education, the bills tried to curtail the ability of federal courts to order busing and even to limit busing in places where courts had already ordered it.

Lying is a big issue, but the bigger issue here is Biden's ignorance or disregard for the devastating effects that the demise of busing has had in terms of efforts to achieve integrated schools.  Biden's decades of opposition to busing helped to lead us to where we are today, with the resegregation of urban schools, in particular, now almost complete.

Even during the 8 years of Obama-Biden, they did nothing to stop or slow this resegregation trend in the years just before Trump.  In fact, their support for the even-more-intensely segregated charter schools skyrocketed during the Obama years and led to the further debasement of public education. After looking like a fool at the recent debate and spending a few days on defense, now Joe has moved to a cautious offensive position, declaring just today that "I don't have to atone."   Maybe not, Joe, but you do have to acknowledge reality.  Or maybe not.