Has Corporate Education "Reform" Earned Another 25 Years to Complete the Resegregation and Privatization Agendas? Part I

With a series of conservative SCOTUS decisions beginning with the Nixon Court, and with a particular hostility by the Reaganites toward the equity and equality agenda that grew from the War on Poverty in 1960s, the resegregation of public schools
took hold in earnest in 1988, and it has continued unabated since then (click chart to enlarge).  It is not surprising, then, that the most recent NAEP 2013 summary report does not include the achievement gap numbers from years prior to 1990, when the achievement gaps between whites and minorities from 1971 (when NAEP began) to 1988 were dramatically shrinking at the same time that school segregation was shrinking.

No one, particularly Arne Duncan or Bill Gates, wants to think about the resegregation of schools that is further incentivized by their corporate education charter school policies.

The correlations between resegregation rates and NAEP achievement gaps are particularly easy to see when we look at the long term shifts in the test score gaps between whites and minorities.  The charts below are from a 2012 NAEP Trends Report, which show gaps for 13 and 17 year olds in Reading. The same pattern holds for Math as well and for 4th graders. 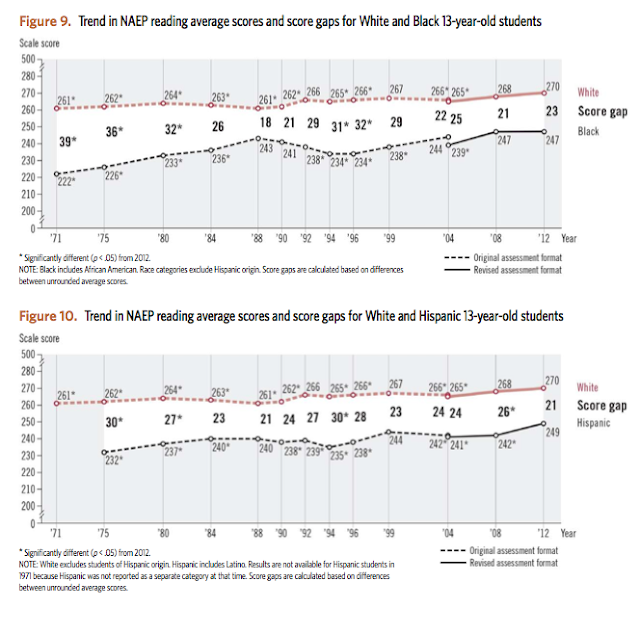 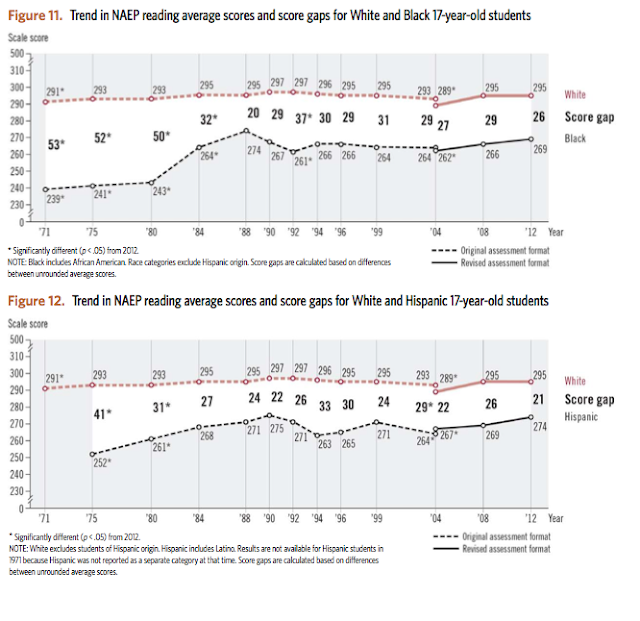 What are the advantages of beginning achievement gap comparisons from 1990 to 2013, rather than when NAEP began in 1971?  I think you have already figured out the answer, but that's where Part II will begin.  We will then look more closely at what the NCLB Era of turmoil, testing, and punishment have produced in terms of the Nation's Report Card.

Oh, by the way, someone tell Washington Post reporter, Lyndsey Layton, that the NAEP did not begin testing 20 years ago.