Remember when the rationale to go to war against the public schools was closing the achievement gap? No child left behind, and all that jazz? Well, now the right-wing Fordham Institute has issued a "study" that decries the stagnating test scores of the middle class high test scorers, while seeking to mislead the public on the actual gains among the poor while they have been under siege by the NCLB occupation forces. Try this opening sentence from the Baltimore Sun this morning:

Jun. 18--Although the nation's lowest-performing students have made great progress in the No Child Left Behind era of testing, the top students are not making similar strides, according to a report by the Fordham Institute.

First, let us revisit the facts on achievement during NCLB provided by one of Fordham's fellow conservatives, Dianne Ravitch. Here is how Dr. Ravitch, who has been, until recently, on the NCLB ship, summed things up last year: 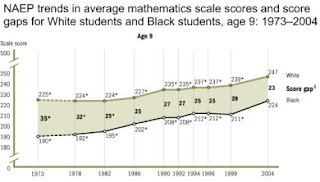 So I don't know what they are smoking over at Fordham, but it's obvious where they are trying to blow the smoke.

But to the finer point, here. Does Dr. Finn, the fire and fist behind Fordham, really believe that readers will not notice that closing the achievement gap requires more gains at the bottom than at the top in order to, uh, close the gap? That, or bring down the top scorers, yes? Helloooooooooo.

All of this, I would suggest, is an attempt to hurriedly claim success for a failed policy before dumping the whole NCLB privatization scheme in order to pivot the conservative ed reform agenda toward the college bound who have been so neglected for the past seven years. Of course, in order to not be accused of exclusionary policies, the conservatives now claim that the entire population is college bound. And if you are not, well, your high school needs to be shut down, or you need to try harder.
at 7:30 AM