The new NAEP scores are just out, and, per always, the hand-wringing has already begun.  Compared to 2017, scores disappoint, especially for reading.

Below are charts showing the trajectory of scores over time for 4th and 8th grade students in Math and Reading.  Below the charts are a few observations. 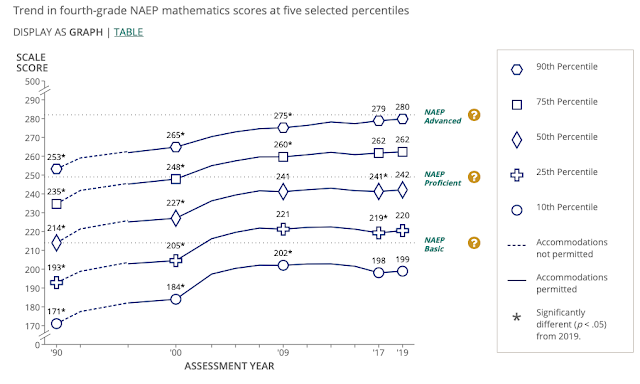 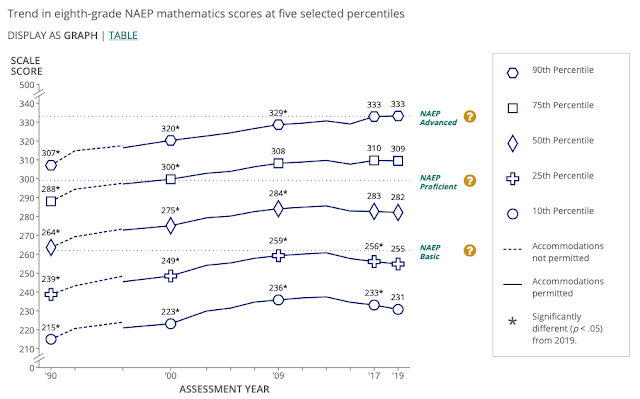 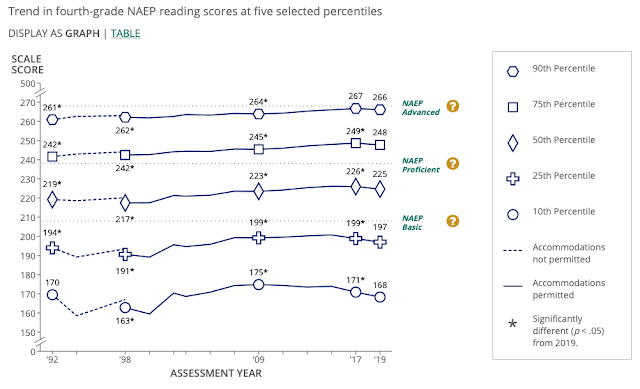 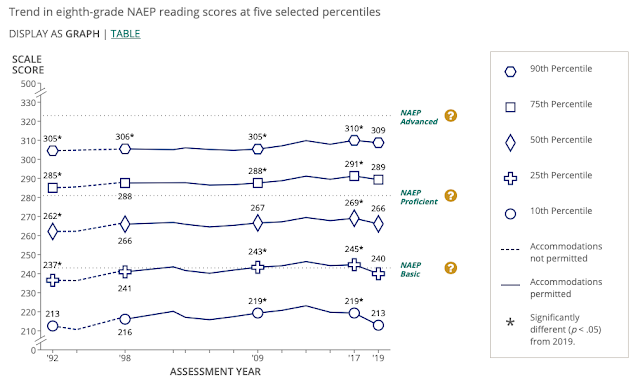 When we look at these NAEP scores over time, one thing that stands out is the general tendency for scores to improve, however gradually.  When you look at the NAEP scores beginning in the early 70s to early 19990s through today, that trend is consistent--a gradual improvement over time, with bursts of punctuated improvement or decline.

A second aspect that stands out is that the rate that NAEP scores increased was greater before testing accountability became mandated by federal law than it was after.  From 1990 to 2002, before NCLB's testing accountability regime was passed or took hold, the rate of NAEP score growth for almost all grade levels and percentile rankings was higher than it was after 2002, when the NCLB testing madness began in earnest.

Also note that the longer that NCLB remained in effect, NAEP score growth slowed or even declined for some categories.

And when we look at the struggling students (10th and 25th percentiles) who were specifically targeted by NCLB testing accountability reforms, we see even more graphic examples of NCLB ineffectiveness in raising academic performance as measured by test scores.

We cannot forget that these sharp declines in Reading accompanied a growing focus on direct instruction and phonics as the officially sanctioned approach to reading.  We should not forget, either, the decline of school libraries in public schools during the past 20s and the near total absence of libraries and, certainly, of librarians in the 7,000+ charter chain gang schools across the U. S.


A federal judge on Thursday held Education Secretary Betsy DeVos and the Department of Education in contempt of court for violating an order on student loans.

The judge had previously ordered the Department of Education to stop collecting on loans owed by students of a now-defunct for-profit college. But, despite the order, the department admitted it had erroneously collected on the loans of more than 16,000 borrowers — and many of those payments garnered from borrowers' federal tax refunds or wages, according to a court document obtained by Politico. . . . .

Spoiler Alert: Unlike in 2016, DFER is not happy!  We shall see what the Dem platform eventually looks like, but if Warren is the candidate, it will look nothing like 2016.
I am going to do several posts on Warren's new education plan, which kicks in the ass anything released so far by the other candidates.
The first thing I checked out in the new plan was the charter school section.  Among the best news is the promise to eliminate the half-billion federal dollars a year being handed out to corporate charter operators under the Charter Schools Program (CSP).
From The Intercept:

Warren’s new education plan sends a strong signal of how her administration would think about not only charter schools but also other forms of school privatization.

Her plan calls to end the diversion of tax dollars from traditional public schools through vouchers and voucher-like tax credits. A campaign spokesperson clarified that this means both working to stop the expansion of voucher programs and working towards ending existing ones.

Biden and Sanders’s plans do not mention vouchers or tuition tax credits, though Sanders told The Washington Post that he would not support using public money in the form of vouchers or tax credits for private or religious school education, which he has a long record of opposing. Biden did not answer the same question when he was asked.

In her plan, Warren frames her opposition to the 2016 charter school ballot initiative as an example of “fight[ing] back against the privatization, corporatization, and profiteering in our nation’s schools.”

She pledges to “go further” and now calls for eliminating a federal grant program used to promote new charter schools. She pledges to see if there are any other federal programs that subsidize new charters and would “seek to limit the use of those programs for that purpose.”

Warren pledges to fight to ban for-profit charter schools, which represent around 15% of the sector. But she also goes after nonprofit ones, promising to end a federal program that provides funding for new schools and opposing provisions that allow them to sometimes evade the same level of transparency and accountability as traditional public schools. The plan seeks to ban nonprofit charters that employ or outsource operations to for-profit service providers and calls for the IRS to investigate these schools’ nonprofit tax status.


From the Warren Plan:

To keep our traditional public school systems strong, we must resist efforts to divert public funds out of traditional public schools. Efforts to expand the footprint of charter schools, often without even ensuring that charters are subject to the same transparency requirements and safeguards as traditional public schools, strain the resources of school districts and leave students behind, primarily students of color. Further, inadequate funding and a growing education technology industry have opened the door to the privatization and corruption of our traditional public schools. More than half of the states allow public schools to be run by for-profit companies, and corporations are leveraging their market power and schools’ desire to keep pace with rapidly changing technology to extract profits at the expense of vulnerable students.
This is wrong. We have a responsibility to provide great neighborhood schools for every student. We should stop the diversion of public dollars from traditional public schools through vouchers or tuition tax credits - which are vouchers by another name. We should fight back against the privatization, corporatization, and profiteering in our nation’s schools. I did that when I opposed a ballot question in Massachusetts to raise the cap on the number of charter schools, even as dark money groups spent millions in support of the measure. And as president, I will go further:
at 10:59 AM No comments:

From 2012 Schools Matter: The Naked Truth about the National Reading Panel R...: Stephen Krashen's letter to Ed Week in the previous post has motivated me to post the following review here for all those young teachers who are reading the deceptive, revisionist crap by those who want to impose another generation of the mind-scrubbing literacy tactics based on ideology rather than pragmatic practice grounded within good research and sound principles. ...
at 9:13 AM No comments:


“The algorithms are prone to a couple of flaws. One is that they can be fooled by any kind of nonsense gibberish sophisticated words. It looks good from afar but it doesn’t actually mean anything. And the other problem is that some of the algorithms have been proven by the testing vendors themselves to be biased against people from certain language backgrounds.”

In support of all the teachers, parents, and kids in Chicago who are marching, striking, and honking their horns for public schools.  And in special memory of George Schmidt, who gave me this shirt when I was in Chicago in 2013 promoting my first book. 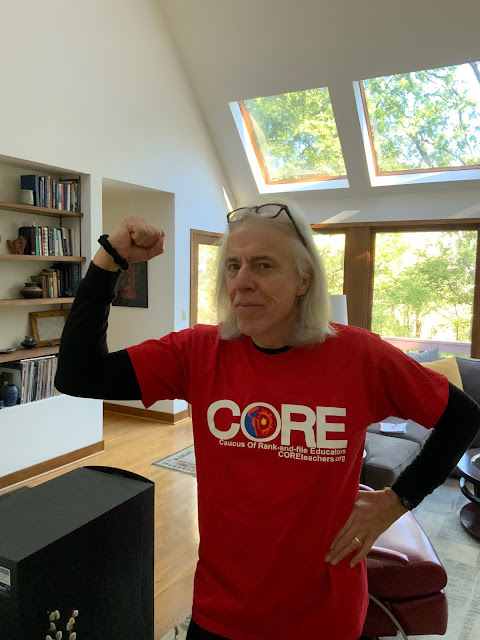 DeVos is the perfect Secretary of ED for Traitor Trump--she's incompetent, corrupt, and contemptuous of the law:

U.S. Secretary of Education Betsy DeVos faces potential sanctions or a finding she’s in contempt of court for continuing to collect on the debt of former students at bankrupt Corinthian Colleges Inc., going so far as seizing their tax refunds and wages.
“I’m not sure if this is contempt or sanctions,” U.S. Magistrate Judge Sallie Kim told lawyers for the Education Department at a hearing Monday in San Francisco. “I’m not sending anyone to jail yet but it’s good to know I have that ability.” . . .

KIPP, Inc. would like to forget that Mike Feinberg is co-founder of KIPP, a corporate "no excuses" charter school chain made infamous by a weird macho management style that exhibits sadistic and masochistic excesses toward both students and teachers.  Adults and children are commonly worked to the point of physical and mental collapse and then discarded without any signs of empathy or concern by KIPP CEOs.

KIPP's discarded victims are most often brainwashed to self-blame for their failure to meet KIPP's expectations, which keeps negative PR to a minimum while insulating the perpetrators from any sense of responsibility for their corrosive and cruel treatment of other humans.  It's a cult technique that continues to be well-funded, as corporate and federal support make the KIPP Model of total compliance schooling the dominant mode of segregating and culturally sterilizing economically disadvantaged black and brown children.

If we have historians a hundred years from now, KIPP Model practices will be viewed the same way we, today, view the eugenics ideology and practices of the 1920s.

While KIPP students are mostly poor and almost entirely black or brown, management is largely white male, and the teacher corps is majority white female.  The KIPP Model is the 21st Century version of the black industrial model of schooling for ex-slaves in the late 19th Century, a theory and practice that was perfected at Hampton Normal and Industrial Institute.

At Hampton, the future black teachers were indoctrinated to accept their social subjugation and moral inferiority as their just due and to work their fingers to the bone in order to gain acceptance as second class citizens among the white elite. The 80 percent of students who were dismissed from Hampton before earning teaching certificates were viewed as victims of their own recalcitrance and/or laziness.

Last spring Mike Feinberg found himself being dismissed from KIPP, and just as KIPP students or teachers who are viewed as liabilities are disposed of without a second thought, so was Feinberg fired when his sexual dalliances with a middle school student and employees could not be covered up any longer and, thus, became a threat to the KIPP brand.

Now corporate ed reformer and think tank denizen, Rick Hess, has offered another take on to the unfairness of Feinberg's firing.  Hess doesn't blame KIPP, Inc. nearly so much as he does 1) the timing of Feinberg's public outing, coming as it did during the peak of the Me Too movement, and 2) the "emotionally immature, impetuous, and impressionable" qualities of Feinberg's child accuser. Here's the most disgusting part of Hess's dissembling dissing of the accusations:


Educators work intimately and forge powerful bonds with emotionally immature, impetuous, and impressionable minors. A teacher can’t do their job whole-heartedly or well if asked to live in constant fear that unsupported allegations can ruin their professional lives and public reputations.

(Washington, DC) — The following is a statement from Nancy Altman, President of Social Security Works, on the Medicare executive order Donald Trump is signed today:

Medicare Advantage plans are also a terrible waste of public dollars. They have overcharged Medicare by $30 billion in the past three years alone.

Medicare, like Social Security, works. Republicans want to privatize both of them. We have to stop them and instead, expand both.”
at 2:58 PM No comments: