Kevin Carey Plays His Fear Card about American Colleges: It's a Deuce

With ALEC far on in writing model legislation to put steerage of higher education under the ham hands of the Tea Party and the Oligarchs (sounds like the worst band ever, right?), and with the federal government too in debt to the oligarchs to do anything about it, the only remaining stumbling block is the need to convince the public that higher ed is going to hell in a hand basket.  Enter, Kevin Carey, to declare all rotten in higher ed.

His evidence?  Another test, of course, this one designed by the same international cabal that has turned the world PISA-centric with its periodic econometric analyses and ruminations on the meaning of childhood and learning around the world from the vantage point of a #2 pencil.  Now PISA-ria has done as much for college graduates, whose knowledge can now be indicated on a bar graph that represents the results of, yet, another meaningless test.

The thing that is most puzzling about Carey's contentions in the New York Times is his claim that there is some connection between American scores on a post-bacculareate literacy test and how many jobs the new wolves of Wall Street ship overseas to take advantage of slave labor among children who can't read. I don't get it:


"While American college graduates are far more knowledgeable than American nongraduates, creating a substantial “wage premium” for diploma holders, they look mediocre or worse compared to their college-educated peers in other nations.


This reality should worry anyone who believes — as many economists do — that America’s long-term prosperity rests in substantial part on its store of human capital. The relatively high pay of American workers will start to erode as more jobs are exposed to harsh competition in global labor markets. It will be increasingly dangerous to believe that only our K-12 schools have serious problems."

Am I missing something here?  Not only has Carey taken for granted that Americans are agreed that elementary and high schools suck, but that now we are in danger if we do not believe the same about colleges.

And in terms of Carey's "relatively high pay" of American workers?

The U. S. has the highest percentage of workers in low wage jobs among OECD nations--the same nations compared in Carey's test.  Not only that, but the chart below shows

how workers at the bottom fare in relation to the typical worker, with a lower number implying more inequality. As the figure shows, earnings at the 10th percentile in the United States are less than half (47.4 percent) of those of the typical worker. This is the lowest share in the figure and is far below the (unweighted) peer average of 62.0 percent. 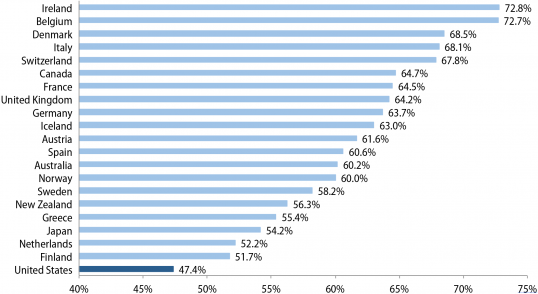 The U. S. is the only advanced economy that does not require paid vacation for employees. 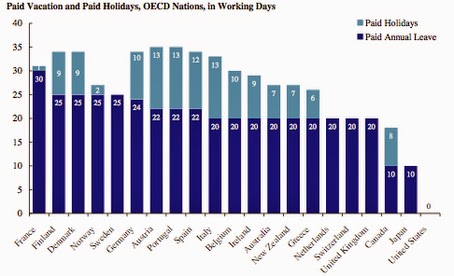 The U. S. remains the most productive per person Western nation, and the most overworked--with 85% of men and 66% of women working more than 40 hours a week.

In the U. S., CEOs make 354 times the salary of a rank and file worker.  Predictably, the U. S. also has the highest income inequality of OECD countries.

The New York Times reported in April that--
The American middle class, long the most affluent in the world, has lost that distinction.
While the wealthiest Americans are outpacing many of their global peers, a New York Times analysis shows that across the lower- and middle-income tiers, citizens of other advanced countries have received considerably larger raises over the last three decades.
After-tax middle-class incomes in Canada — substantially behind in 2000 — now appear to be higher than in the United States. The poor in much of Europe earn more than poor Americans.
The numbers, based on surveys conducted over the past 35 years, offer some of the most detailed publicly available comparisons for different income groups in different countries over time. They suggest that most American families are paying a steep price for high and rising income inequality. . . .

Finally, the U. S. relative poverty rate is highest of http://www.epi.org/publication/ib339-us-poverty-higher-safety-net-weaker/any of the other nations in Mr. Carey's comparison: 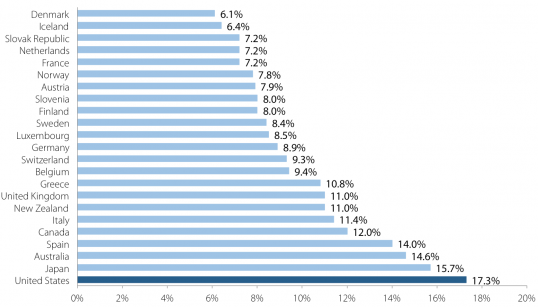 Arne Duncan was in Tennessee last month to deliver the keynote at a corporate Education Writers Association.  Duncan loves Tennessee, as it represents one of the few states that has remained loyal to the RTTT plan devised by the Gates Foundation.

Since 2009 Duncan has been spewing the bromide that education is the civil rights issue of our time, but in Nashville in May, Duncan took his game up a notch.  Now he's claiming that equality means equalizing test score results.  Once that is done, by whatever means necessary (see documented brutality of KIPP and KIPP knock-offs), the equality will have been achieved without ever spending a nickel or minute on the structural issues that our nation continues to ignore in the same way we ignore our rotting bridges, highways, water systems, etc.

This is from the corporate pretend news source, Chalkbeat:

“Without accountability there is no imperative to face the hard truths of our education system,” Duncan said.

Like the old civil rights battles, Duncan said the modern ones require winning local support. He described four teachers he met recently at a Tennessee school who spent their evening at a student’s softball game, earning the trust of that student’s mother.

“Tennessee’s example in the history of Brown actually gives me great optimism,” Duncan said. “To paraphrase Dr. King, the moral arc of our schools is long but it bends toward justice, and justice means true equity and opportunity for all.”

Really, Arne? To paraphrase Dr. King?  Are teachers going to a ballgame the clear signs you have been looking for that Tennessee schools are bending toward justice?  Or is it the NAEP scores in 2013 that you are still hyping, even though the scores in 2011 in TN went down almost as much as 2013 went up-- so that TN is just above where it was in 2009 in terms of NAEP?

What would Dr. King say about the apartheid charter schools that federal policy incentivizes or outright dictates?  One of the keys to the RTTT kingdom was to remove charter school caps, which Tennessee has done will all the haste required to land their $501 million prize in 2010.

Now Memphis has over 40 of these segregated hellholes staffed by clueless beginners from TFA or one of TFA's knock-offs, and Nashville has 18.

Here is what Tennessee's real record is in terms of civil rights in schools. From TMoE:

USA Today recently reported that Tennessee ranks 8th out of all states in terms of the highest segregation levels for black students.

But wait, there is more from the Civil Rights Project recent research study on resegregation of schools.  Some states are doing better than others.  Between 1980 and 2012,