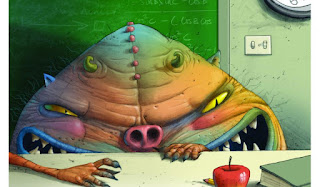 CRPE and the creeps who make up this Gates sludge tank are concentrated on expanding segregated corporate charter schools that will impose the Broken Windows model of schooling that KIPP made infamous.  They are all about corporate exploitation of public space and dehumanization and control of the poor.  Coming up with new ways to make functional public schools dysfunctional is necessary to carry out their mission.   Read the story here from The Progressive.
at 10:25 AM No comments:

If you have a highly unpopular Common Core testing system, such as the one in Tennessee, that is guaranteed to produce widespread failure among students and their teachers, what do you do when the scores come out just before the end of school?

Simple. You let the test vendor produce a phony "quick" score that looks like students are proficient, and you send those scores to schools and homes so that they can be used to figure into final student grades.  In doing so, state officials and testing companies hope that parents will put away their pitchforks and torches, and go on vacation.

Teachers can then be told that these "quick" scores aren't the real scores, you know, the ones that will be used to decide teacher individual and collective employment fates.  The real scores, which are much, much lower than the phony ones just used to mark grades and placate parents, will be used for teacher evaluation.

If it had not been for the widespread celebrations at schools across Tennessee for the miracle improvements everyone was seeing, the corporate Department of Education that Huffman built would, no doubt, still be mum on the subject.  But with fireworks going off and confetti raining down statewide, the duplicitous fools in Nashville had to come up with a totally obfuscating explanation of their scheme.

Who will be the first to sue?

Story here from Chalkbeat.
at 9:23 AM No comments:

Media Awakens to South Side Lawsuit

a clip from Chalkbeat:

Citing the historic U.S. Supreme Court case that led to integration of America’s public schools, a handful of Memphis parents and teachers are suing Shelby County Schools over a recent school closing, claiming that its students will receive an “inferior and unequal” education at the school to which they are being reassigned.

In a motion filed in U.S. District Court, three teachers, family members of two students, and a community activist argue that test scores at South Side Middle School, which is in the process of being shuttered, outpaced those at Riverview Middle School last year. They say Riverview is a dilapidated building in a gang-ridden neighborhood that would place students’ safety at risk. They also cite absence of computer and Spanish classes at Riverview, which were offered at South Side. . . .

Peg with Pen: My Comment on PBS NewsHour's Opt Out Coverage

Peg with Pen: My Comment on PBS NewsHour's Opt Out Coverage: William Brangham, Thank you for covering Opt Out tonight. I'd like to clarify a few things that I truly wish would be made known to t...
at 3:57 PM No comments:

Turning “Collaboration” Into a Bad Word

Author's Note: This post was originally posted April 12, 2015. It is being reposted in light of the leadership of the American Federation of Teachers and United Federation of Teachers supporting a corporate education reformer for New York State Education Commissioner.
The president of the American Federation of Teachers Randi Weingarten, offered tempered praise, saying in a statement that while the union was “opposed to high-stakes testing” and grading teachers on students’ test performance, “even when MaryEllen applied it as required under Florida law, she made collaboration her mantra.” - MaryEllen Elia Named New York State Education Commissioner | The New York Times - May 26, 2015

This article has been published on
Ed Notes Online: Turning "Collaboration" into a Bad Word - Ken Derstine at Schools Matter
Substance News: Turning 'Collaboration' Into a bad word...The American Federation of Teachers and the American Enterprise Insitute...'evaluating teachers by scores may actually reduce quality...'

For Sunday's 61st anniversary of the Brown v. Board of Education ruling, which proclaimed "separate educational facilities are inherently unequal," The Huffington Post takes a look at the state of education for black students in 2015.

In many states, there continues to be stark disparities in resources provided to black students and white students. In Nevada, for example, high-minority school districts receive significantly less state and local funding per pupil than low-minority districts.

These six graphs show the disparities. 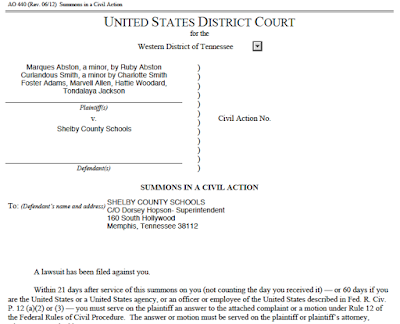 Having been unsuccessful in getting Shelby County Schools to listen to reasoned argument, South Side parents, teachers, and concerned citizens have filed suit against SCS in U. S. District Court to halt the planned closure of South Side Middle School in Memphis.

Plaintiffs in the case allege violations under Tennessee statutes, the Equal Protection Clause of the 14th Amendment of the U. S. Constitution, and  violation of Title VI of the 1964 Civil Rights Act.

Below are the factual allegations:

1. Defendant SCS has voted through its Board and its Superintendent to close South Side Middle School grades six through eight and to move those children who previously attended South Side Middle School to a facility presently known as Riverview Middle School for the upcoming 2015-2016 school year.
2. Your Plaintiffs aver that the movement of students from the South Side Community to the Riverview Middle School is detrimental to the welfare and  proper education of those students and parents  in the South Side community.
3. Your Plaintiffs aver and will show to the court that better alternatives exist and the movement as planned by the SCS violates the equal protection rights of the South Side students under the United States Constitution and Article XI, Section 8 of the Tennessee Constitution as well as
42 USC Title VI .

4.The movement of students as planned by SCS fails to provide substantially equal educational opportunity for the South Side students because SCS students are being removed from their community and placed in the midst of a crime-ridden Injunction Zone from the Riverside Rolling Nineties Crips. (See Exhibit E Attached hereto) The Shelby County District Attorney General, Amy Weirich and the Environmental court have declared this area an injunction zone for gang activity. The area five blocks from Patton street which encompasses the Riverview  Middle School has been determined a nuisance by the Shelby County District Attorney , the Memphis Mayor and the Shelby County Environmental court. This is no place to send our children.
5.The movement of students as planned by SCS does not provide a rational basis for vastly unequal school quality. By the analysis of SCS in their own assessment documents, for the 20114-2015 academic year (See Exhibit A attached hereto) Riverview Middle has poor academic performance with fewer than 15 percent proficient in Math and Reading Language Arts. South Side performance and proficiency figures are based on a larger sample of students because when you consider the schools grades six
through eight. South Side has twice as many students. (See attached Exhibit B) With 166 Students, Riverview Middle is under-enrolled and does not enjoy some full-time course offerings such as computer and foreign language (Spanish). South Side offers both computer and Spanish. Riverview has steadily declining enrollment since its ten-year peak in 2004-2005 at 628 students, Riverview Middle is underutilized at 23%. There is a declining overall birth trend over the last ten years and an enrollment projected to continue to decline over the next five years. . South Side has a School Level Evaluation Composite of 3 although the chart, (see Exhibit C attached hereto) somehow reaches an unexplainable average of 2 although three’s are present across the board. This is the same inexplicable reasoning that is moving South Side to Riverview when it clearly appears the move should be the other way around.


6. The movement of students as planned by SCS creates inferior education and inferior treatment for the South Side students rather than the equal treatment contemplated by the fourteenth amendment to the United States Constitution and equal protection provisions of the Tennessee constitution. The Riverview Middle Structure is in a dilapidated and hazardous condition. Pursuant to the 2013 physical needs assessment (See Exhibit D attached), Floor urinals are antiquated and do not meet ADA standards. Stairwell treads have lost their integrity. The window system is old and needs replacing. The interior lighting needs replacing. The roof was thirteen years old and in poor condition. The parking lot was in disrepair. The locker rooms were in need of renovation. The ceiling in the kitchen needed repair. The cooling tower, chillers and air handler were needed replacement at a cost of $650,000/ The South Side facility and structure is in excellent condition.
7. Moving children , if not carefully done can be detrimental and cause the children to slide backwards. In this instance of the move from South Side to Riverview, it has not been well done.

Below is some background, previously published here, on how the lawsuit emerged.  Please give to the Legal Defensed Fund:

Over the past several months, I have had the opportunity to get to know and to work with a core group of dedicated teachers and parents in South Memphis who are smart, savvy, committed, unrelenting, and fearless in doing what is necessary to beat back the privatizers and profiteers who now think they call the shots for Memphis schools.

These new friends and colleagues have attended school board meetings, where they heated up the microphones, and they have gone on TV and radio to get the message out on the ASD corporate charter handout organization and its homegrown equivalent, the IZone.  They are determined to keep their community schools open.

This group, OurStudents MatterNow, has plans save South Side Middle School from being shut down and turned over the charter industry, which is waiting to swoop in to score another big real estate deal and to devastate another community that loves its school.

They need your help. OurStudents MatterNow has started a legal defense fund to take their case into the courts, and they are planning for public demonstrations and organizing events this Spring.

If you want to put your money at Ground Zero of the effort to save community schools and make them better, please help these dedicated citizens.  Their GoFundMe site is here:  http://www.gofundme.com/ourstudentsmatter