Some things just don't change, and Team Obama is one of them.  From HuffPo:


The Obama administration on Thursday retreated from an ambitious proposal to protect low-income students and taxpayers from wasteful career-training programs and for-profit colleges that saddle students with taxpayer-backed debts they can not repay.
Investors cheered the news, sending shares in major for-profit college chains soaring Thursday and significantly outpacing gains in the broader U.S. stock market. Student advocates and consumer groups accused the administration of selling out students. . . .
at 10:51 PM No comments:

If You Think Ending Charter Co-location is a Good Idea, Read This!


A headline by Chalkbeat Tennessee would lead us assume that public schools have scored a big victory: Shelby County to pull kids from schools shared with ASD: Co-location to end next Fall.

The story attached to the headline, however, clearly shows that assumption to be wrong.

If this new plan goes forward, ASD charters will get the ENTIRE BUILDING where they are now co-located, and the hundreds of public school students will be moved into segregated testing containment camps run by I-Zone.

Teachers and parents must be at the November 18 meeting in large numbers to make sure this giveaway of public space to corporate reform schools does NOT happen.

Shelby County Schools next fall will slam the brakes on its practice of sharing buildings with Achievement School District charter schools, pulling hundreds of students out of up to 10 schools that otherwise would be co-located with charters, Chalkbeat has learned.

District administrators say the move to end colocation is academically motivated. But it could also benefit the school district by slowing the steady exodus of students from SCS schools to the state-controlled ASD charters. It would also uproot several well-established school communities throughout Memphis and leave some school buildings with just a handful of charter school students in them.

Some ASD charter school operators take over low-performing schools a grade at a time. This practice, known as “phasing in,”allows charters to adjust their teaching model to local conditions as needed, and to share innovative strategies with traditional public school educators, according to charter leaders. . . .

[Comment: Charters have one strategy, and it is not innovative but, rather, criminally abusive to both students and teachers.]


But colocation has led to morale, recruitment and retention problems among principals and teachers who work for traditional public schools, and who know their jobs will be phased out, said Brad Leon, the district’s chief innovation officer. This has hurt test scores in those schools, Leon said.

“We want our staff focused on student achievement,” Leon said. “We want them focused on the task at hand.”

Ending the colocation practice next year means a significant portion of students and teachers at Shannon, Westwood and Spring Hill elementary schools and Cory and Lester middle schools will be moved to other campuses.

If the ASD follows through with taking over Airways, A. Maceo Walker middle schools and Hawkins Mill, Brookmeade and Denver Elementary schools–all schools in which charter operators are considering phasing in at a grade at a time – students and teachers in the upper grades at those schools now will also be moved.

SCS administrators will present a proposal to board members at the next board meeting,  Nov. 18, detailing plans for those students.

ASD officials said they will not back away from its plans to phase-in charter schools, even if there will be no other students in the building.

Lies and Deception by Jesse Register

In light of the recent news that MNPS administrators had already cut a back room deal to convert Inglewood Elementary School to a charter school operated by KIPP-Nashville, we have been reviewing what we've been told along the way by MNPS leaders, like Alan Coverstone, Office of Innovation. On September 13, 2014, in Inglewood, Mr. Coverstone was gracious enough to travel to East Nashville to address parents who assembled after learning for the 1st time on September, 9, 2014 that Dr. Jesse Register intended to turn all East Nashville schools into "all choice" schools, aka the "third way."

Here is what Mr. Coverstone said near the outset of the meeting:

"I can say for a fact Dr. Register doesn't believe and I sure as *heck* don't believe that anybody at Bransford Avenue can draw up a plan, give it to you, so it's gonna create this kind of school. So, we're not gonna do that. That's not what we've done."

We sent a public records request to MNPS back on September 22, 2014. A copy of the requests we made can be found here: http://eastnashvilleunited.org/?page_id=110. As of this moment, MNPS has not turned over any documents. There was a story out yesterday explaining the delay, as submitted by MNPS http://bit.ly/1pVxuKA. Here is what the Tennessee Coalition for Open Government has to say about the speed the government should have in returning public records to the public http://tcog.info/law-says-promptly-comes-public-records-requests/

For background information, please see links to stories below:

If you would like to volunteer your time, please send us an email to EastNashvilleUnited@gmail.com. If you haven’t signed our petition, please do so: http://bit.ly/EastNashUnited

On behalf of East Nashville United, thank you!

P.S. We are just volunteers with kids, jobs, and families trying to get the word out to parents, families, and community members. So, it is vital that you "like," "comment," "SHARE" or tweet any information about this issue across the social media platforms you use daily. We want to HEAR from YOU. We try to keep the website up-to-date with fresh information, so please check it out http://eastnashvilleunited.org/


Look at what happened in Memphis this week, and then tell me that teachers, students, and parents standing up together doesn't matter.

Within minutes after parents and teachers lined up to express their disgust with the planned corporate takeover of their schools, Hopson came up with a new scheme, this one hardly better than the first one.


In response to the state’s steady takeover of Memphis schools, Superintendent Dorsey Hopson said Tuesday night that he would propose expanding his own turnaround efforts known as the iZone, and the school board’s chairwoman said she would push for a legislative moratorium on the Achievement School District’s expansion.

The district’s iZone has regularly outperformed the Achievement School District, a state-run district targeted at moving the bottom 5 percent of schools into the top 25 percent.  A full third of the district is eligible to be taken over by the state in the next three years. ASD officials are currently working to determine which seven schools they will hand over to a handful of charter schools next year.

Hopson’s and board Chairwoman Teresa Jones’ comments came shortly after more than 20 parents and teachers accused board members of allowing schools to be taken over by the state and charter schools.

“It’s time for you guys to do your jobs,” said Kenneth Ingram, a parent at American Way Middle School.  “Put a stop to this. Another charter school coming from another state and taking over our school? We’re not going to allow that to happen. Please do your job.”

Neither the board nor the Shelby County Schools administration has legal control over the Achievement School District’s takeovers of low-performing public schools, Hopson and board members repeatedly reminded the public Tuesday. The takeover process has led to contentious protests at several community meetings this week.

Hopson said he will propose to board members in the coming weeks closing several schools and merging them into one school that would join the iZone.  Similar to charter schools, iZone schools are given waivers from state laws, require teachers to reapply for their jobs, and receive extra resources to try innovative strategies to improve test scores.  Unlike charter schools, the iZone schools remain under district control.


“We’ve been kicking around some numbers and without any extra money, we would look at combining two or three schools and bring them in the iZone,” Hopson said. “That would take a few more low-performing schools out of play (for ASD takeover). At the end of the day, though it’s about what is going to be best for the kids.” . . . .

If Hopson and the Shelby County School Board want to match some schools, they should start matching economically disadvantaged schools with those that are not.  Mix the schools so that no more than 40 percent are poor, provide professional development for teachers and principals, infuse new resources, and then give it three years to see if improvements don't materialize.

Meanwhile, the entire process of labeling schools should be audited to determine whose politcal machinations are involved to make sure that only black schools get set up for closure, when mixed schools like Cordova have weaker test scores.  Cordova, in fact, is on neither the Priority or the Focus list of low-testing state schools.  Who's pulling the strings to make sure the new penal system of pedagogy only comes to black schools?

How Did Cordova Middle School Avoid the ASD Hit List?

Is Cordova Middle too white to be handed over to a corporate reform charter chain gang operator?  With just 51 percent African-American, is ASD avoiding the more politically perilous territory of putting a more white poor school on the hit list?  Look at South Side scores, American Way, or Wooddale.  Do any of these black schools have lower scores than Cordova Middle??

Can you get any lower than all 1s, with only a single exception?? 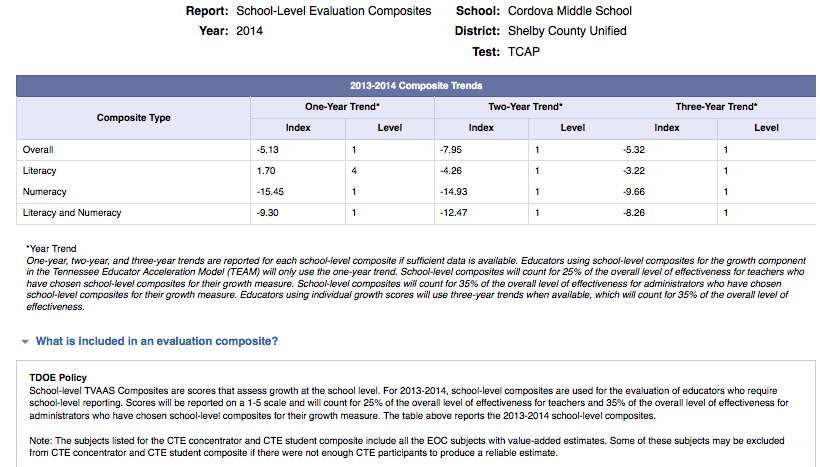 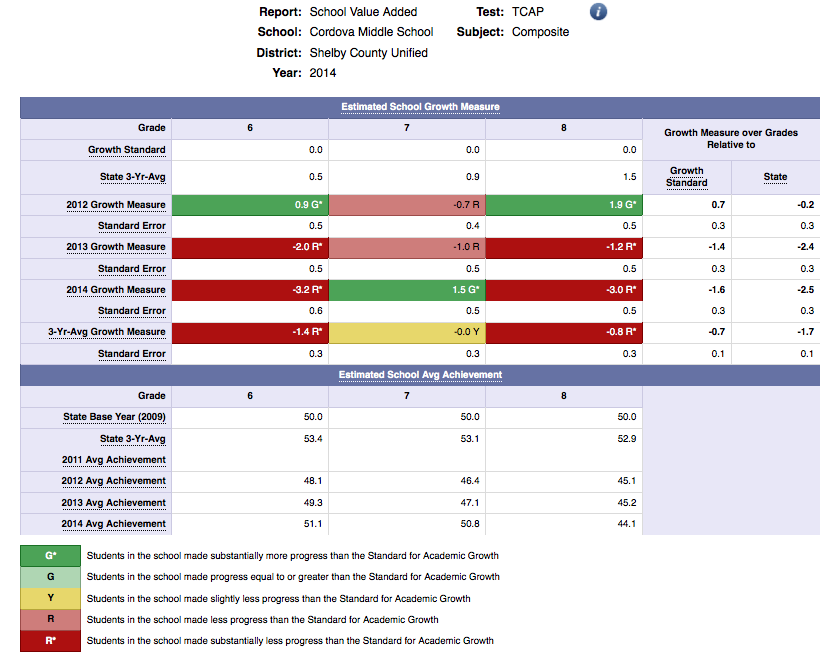 Email ThisBlogThis!Share to TwitterShare to FacebookShare to Pinterest
Labels: ASD

The Nation has acquired a lengthy memo (see below) detailing how TFA's Tier 1 temps are prepared to deal with the growing resistance to their fascist agenda.  The article is a must read.

Email ThisBlogThis!Share to TwitterShare to FacebookShare to Pinterest
Labels: TFA