Just as her murderous brother, Erik Prince, has a scheme to privatize the U. S. military, the criminally-ignorant crone, Betsy DeVos, is out to do the same for schooling from pre-K through college:


“I think that there’s been an outsized footprint in the last couple, three decades on the part of the federal government in education,” she said. “And it’s my goal to extract us from a lot of those spaces. I will welcome your thoughts on what we need to be doing less of. And if there are areas to be doing more of, what are those areas?”

Email ThisBlogThis!Share to TwitterShare to FacebookShare to Pinterest
Labels: DeVos

Time to end the racist triumvirate of Tuck, Huppenthal, and Horne

It’s a tale of white fragility and fear, really.—Imani Gandy

These two racist State Superintendents finally got what they deserved for shuttering ethnic studies in Arizona. However, right here in California, we have a candidate for State Superintendent that enacted the same policies in Los Angeles—shuttering ethnic studies, closing dual language programs, and killing heritage language programs. That bigot's name is Marshall Tuck. Let's show Tuck that California is not Arizona, and that we shouldn't have to wait for years for a court to rule in on his racist policies. Let's stop Tuck from repeating a Horne or a Huppenthal, by making sure he never holds a position of power in which he can harm school children again. 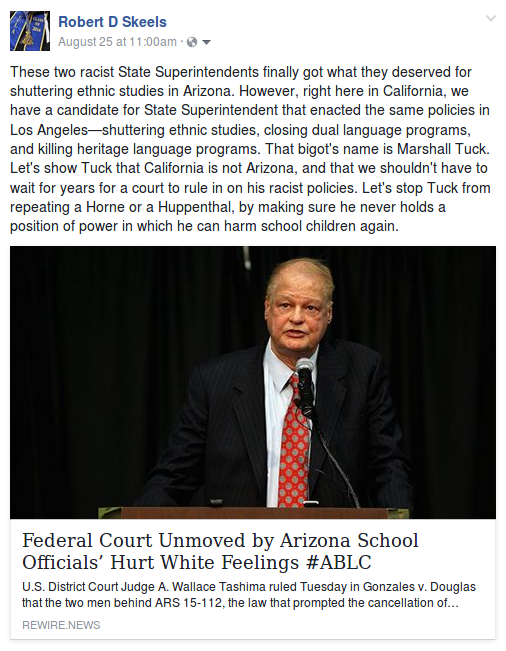 
JB: Does that mean NEA is anti-charter?

Bryant does not ask about and Pringle does not volunteer info on specific examples.  Why?  Because if they exist, they are so rare as to be meaningless.

NOT among the criteria that Pringle says "charters need to have" are humane learning environments, non-penal instructional strategies, rich curriculums, professionally certified teachers and principals, librarians, counselors, or desegregated classrooms.  Nor does she define in this interview or elsewhere what "accountability" or "transparency" mean.

The truth is that NEA only cares about expanding membership and collecting the dues that members pay each year, with the false hope of slowing the bleeding out of public schools and professional teaching.  As long as NEA and AFT remain loyalists to the DNC's Clintonian contingent of paternalistic corporate reformers, every teacher should boycott these core agencies of corporate enabling.
at 10:24 AM 1 comment:

Email ThisBlogThis!Share to TwitterShare to FacebookShare to Pinterest
Labels: NEA

Under the misdirection of Commissioner Candice McQueen, the TN state legislature recently passed a sweeping new charter law that is aimed to expand the footprint and to give more public money to the charter industry's corporate welfare reform schools. And money is not the only thing that Dr. McQueen is offering charter corporations like Green Dot and KIPP.

With the passage of the new state law this summer, predatory charter chains may now demand student directory information on each public school child. This information may then be used to decide which children's homes that charter operators  will flood with slick school marketing brochures that conceal the dehumanizing environments of these "no excuses" institutions for cultural sterilization.

Parents, however, can say no to such requests by contacting their public schools and requesting that their children be excluded from these data sweeps by the charter industry:


Shelby County Schools is required to send a notice to parents at the beginning of each school year about how student information is used. Parents have the option to leave their contact information out of the student directory, or other such lists.

Or, you can write a letter requesting that your student’s directory information remain private. Write to either of the addresses below:

Meanwhile, the leaders of these dehumanizing and exploitative hell schools pay themselves very well, even though these child centers for paternalistic brainwashing are advertised as "non-profit." Oligarchs like Eli Broad amass huge tax savings for donations to these racist outfits, while leaders amass personal fortunes for exploiting the poor: