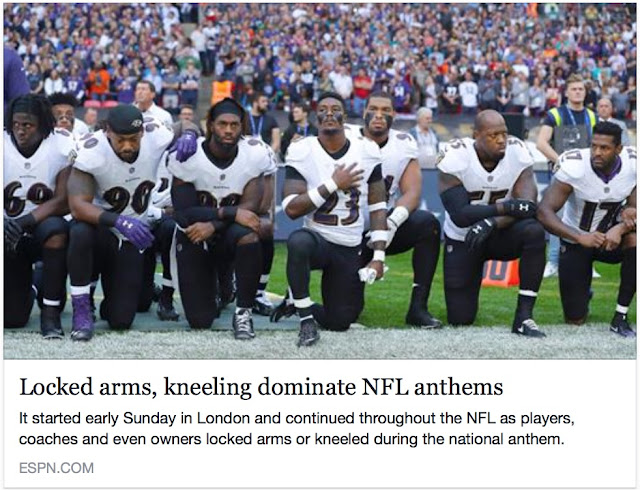 It seems impossible until the day it becomes inevitable.

I posted the above comment on my Facebook page as an accompaniment to this article discussing growth of the protest movement within the NFL that manifested itself this past Sunday. On that day numerous players and owners allied themselves with a small but tenacious group of protestors who had joined Colin Kaepernick in the year since he first sat then took a knee during the playing of the national anthem. His intention: to draw attention to police brutality and oppression of people of color. You can read the transcript of Kaepernick’s comments and rationale here. Recognizing that our mythic “America” is built on genocide and the enslavement of people of color for profit is foundational to being able to move forward towards achieving any semblance of a just society. The fact that white supremacist violence erupted in Charlottesville not quite a year after Kaepernick’s initial protest makes it clear many are not yet ready to take that bitter pill and reconcile our brutal past with our present reality.

Kaepernick stood alone for a long time. There were consequences for him, emotionally and financially. He came to understand systems of oppression, and while he could have used his privilege to stake a place where those systems would be less likely to impact him, he instead chose to put himself in the center of the storm. In this individual gesture he became the pebble with the power to unleash the avalanche.

The status quo resists change mightily. There is too much power and profit riding on the continuous, uninterrupted operation of oppressive systems. Those of us watching recent developments in artificial intelligence, smart city surveillance, the Internet of Things, Blockchain, and impact investing realize the capacity to inflict harm on black and brown communities is about to rise exponentially. Outliers who question become targets of criticism, their message intentionally obscured by character attacks, criticism of the appropriateness of the method protest and other technicalities. Let us talk about anything other than the issues being raised, because recognizing and organizing around those issues could compel change, perhaps revolutionary change. Change is a threat.

While one expects criticism from those holding opposing views, people contemplating direct action outside acceptable norms of group-sanctioned protest must realize that criticism and obfuscation may also come from those technically allied with your cause. There are those who will propose a more “moderate” approach. Such tactics have the appearance of resistance, but are not intended to actually tip the apple cart. There is no meaningful change without risk. Actions taken within the comfort of groupthink may make one feel popular and accepted but are unlikely to push the envelope in any significant way. 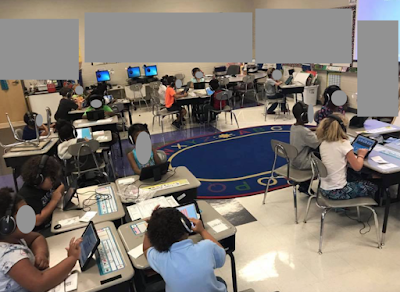 This is the next wave of oppression, and it is rolling into classrooms across our nation and across the globe. Once again, communities of color will be targeted for tech-based interventions under the guise of bridging the “digital divide.” Though over time no one will be safe from the onslaught of financialization. As Mark Zuckerberg, Eric Schmidt, Reed Hasting, Jeff Bezos, and Bill Gates make their next moves I pose this question:

Will you be a Kaepernick? 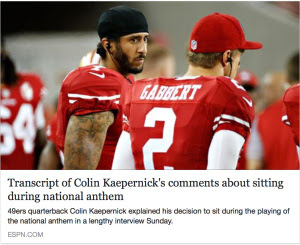 Or will you hang back, waiting for some higher authority to sanction your protest?

Five things one person can do today to begin disrupting the Ed Reform 2.0 agenda: