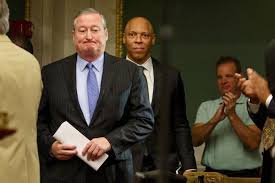 
from The Alliance for Philadelphia Public Schools
By Deb Grill, Karel Kilimnik and Lisa Haver
April 4, 2018

APPS biographies of the nine members of the new Philadelphia School Board.

Unlike the other 500, Philadelphia is the only school district in Pennsylvania whose voters cannot elect a school board. We've had town halls, online surveys, and pronouncements from city politicians, but it all comes down to this:  The government officials who will decide the future of the city's public schools, and who will control a $3 billion budget, have been chosen by one person, Mayor Kenney.  His decision has been based, in part, on the opinions of the thirteen people selected by him to be on the Nominating Panel. It has also been based on the wishes of the influential individuals, organizations and corporations who have lobbied him to represent their interests on the board. Two built-in lobbyists on the Nominating Panel, Stephanie Naidoff and Bonnie Camarda, are members of the board of the Philadelphia School Partnership, which funnels millions every year from private investors into schools of their choice for the programs of their choice, mostly charters.

All of the deliberations of the Panel were held in secret.None of the district's stakeholders, or the city's taxpayers, were able to express their opinions about any of the candidates, whether pro or con, or to raise concerns about possible conflicts of interest. APPS did everything we could, short of legal action, to open up this process. We sent letters to the Mayor and to the Panel, refuting the Mayor’s false assertion that the Panel could deliberate in Executive Session because it was discussing “personnel matters”, pointing out that the Panel was neither hiring nor appointing any personnel. We had several community groups sign a letter asking the mayor to obey the Sunshine Act.