Originally published in 2015 by Ken Derstine: 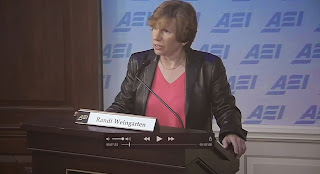 The American Enterprise Institute for Public Policy Research (AEI) is one of the oldest and most influential of the pro-business right-wing think tanks. It promotes the advancement of free enterprise capitalism, and has been extremely successful in placing its people in influential governmental positions, particularly in the Bush Administration. AEI has been described as one of the country's main bastions of neoconservatism. – Right Wing Watch / People for the American Way
Part 1 of this article noted that at a conference of the American Enterprise Institute held on February 5th, 2015, Randi Weingarten was praised by researchers for corporate education reformers for her collaboration in developing a teacher evaluation system based on standardized tests as part of the Gates Foundation’s “teacher quality” agenda. Part 1 concluded by pointing out that Randi Weingarten’s public labor persona differs from what goes on behind the scenes in her collaboration with corporate education reformers.
A clear picture of Ms. Weingarten’s thinking behind her collaboration with AEI can be seen in a one-hour forum held with AEI researchers on June 18, 2014. For an hour she spoke on “Unions in public education: Problem or solution?” Her speech came three months after the AFT quietly announced that it would no longer take money from The Gates Foundation.
At this forum she spoke candidly to an AEI audience whose members want to abolish unions or turn them into company unions that are part of management. Weingarten’s sleight of hand method can be seen in her answer to a question by the AEI moderator Frederick Hess who asks Ms. Weingarten (42:07 minutes into the video):
"Early last month the New York Post reported that your successor at the UFT, Michael Mulgrew, had told a gathering of the UFT leadership, “We’re at war with the reformers. Their ideas will absolutely destroy, forget about public education, they will destroy education in our country.” He said of slow walking efforts on evaluation, “It was a strategy to gum up the works because we knew what their lawyers were trying to do.”  So curious, when these things get out, how does that speak to this the issue of cooperation, or trust or finding common ground?”

Ms. Weingarten’s reply:
"So I think, number one, let me just say that whatever Michael said was said in the middle of a private union meeting. Now, I know the UFT, you have 3000 people in the room, probably NSA is taping every other word, nothing is private, right? But if you have what is set as a union meeting, just like if you had a board meeting that is a confidential board meeting, you would not expect that anybody would actually use whatever was said in that meeting."

If it is not to curry favor with her corporate audience, why would the President of a national teachers union respond in such a way to an AEI audience about a statement from a union official warning that public education is under attack? And to top it off, she says no one would expect that “anyone would actually use what was said in that meeting.” In other words, what union leaders affiliated with Ms. Weingarten say at a union meeting should not really be taken seriously - it is just red meat to appease the huddled rank and file. This reveals her sleight of hand method – disrespect for the interests of teachers and public schools and respect for corporate education reform interests – or is her sleight of hand to say what she thinks the AEI audience will want to hear? It can’t be both!

In an age of constant verbal spin and obfuscation, the only way we can get at the truth of people's intentions is by observing and remembering their actions. In the case of Weingarten, she describes to the AEI audience the actions of the AFT leadership that show her allegiance lies with corporate education reform.
Immediately after the above exchange, Weingarten says the statements must be seen in the context of “the war” that was going on in New York City with relentless attacks on teachers by corporate education reformers. This is immediately followed by praise for the recent UFT contract that included agreeing to a career ladder program and state law waivers by schools, along with other concessions.

The first part of the AEI meeting shows Randi Weingarten speaking prepared remarks explaining the AFT to this conservative audience. She informed the audience of three programs that the AFT is involved with. (6:51) In introducing each one, she had a hand vote from the audience to see who knew about the program, and to scold the members of the audience who were not aware of the program. If this was Ms. Weingarten’s method of teaching during her short time as a teacher, this shaming the students is one of the worst methods of instruction. In this case, she was not so much interested in the audience being informed about the particular program as she was interested in demonstrating how the AFT is collaborating with corporate education reform.
The first program (6:58) Weingarten described was the public-private partnerships the AFT is creating in McDowell County, West Virginia, one of West Virginia’s poorest counties. Weingarten said this corporate/labor model is to be expanded to all counties in West Virginia and Mayor deBlasio wants to bring it to New York to forty schools. Not mentioned at this forum, is the collaboration with Teach for America to build a Teacher Village for low income housing for low-income teachers in McDowell County.
The second program (8:40) Weingarten mentions is “one of the fastest growing online education companies in the United States of America called Share My Lesson” created by the AFT. This has thousands of lessons, including “250,000 lessons created by the AFT” and (not mentioned at the forum) The Gates Foundation Innovation Fund, which “are aligned to the Common Core.” Since 2012, AFT’s Share My Lesson has been a collaboration with the United Kingdom digital education company TES Global.
The third program (10:21) is a partnership under the Clinton Global Initiative with other unions to invest $10 billion of public employee pension funds “in a sound fiduciary way to fix crumbling infrastructure, create jobs, and deliver solid returns.” She claims that this has created 30,000 jobs. No mention of wages, benefits, union rights, etc. Weingarten does not mention what gives her the authority to use the pension funds of her members in this risky way.
In her conversation with the AEI’s Frederick Hess, he asked (47:14) about the proposal at that time by

The Gates Foundation of a two-year moratorium on the consequences of Common Core assessments. He noted this is what Weingarten had proposed in 2013. He also noted that Weingarten in June, 2010 said Common Core “is essential building blocks for a better educational system”, but in 2012 she said the implementation was far worse than the way Obamacare was implemented. He asked her position on the Common Core. After speaking of what she learned in her six years of teaching Weingarten replied (48:05):

"If you think about all those statements, they’re pretty consistent. I’m a big believer in it and I am for the following reasons. I was a lawyer before I was a teacher so I had the opportunity to learn and practice the Socratic method.  I was also a litigator. That tool actually helped me more than virtually any other tool that I had for teacher prep in teaching my kids Civics and the Bill of Rights. When I look at the original standards in the Common Core: the going for deeper knowledge and for applying facts, and not just knowing things, but trying to come up with problem solving and critical thinking, what it took me back to was my teaching at Clara Barton High School …"
After a long monologue about her teaching, Hess interrupted her and asked why in 2013 was she upset by the implementation of Common Core.  She then went on for ten minutes explaining how the Common Core could be better implemented.

She concluded that (54:08): “In some ways the Business Roundtable, The Gates Foundation, the Learning First Alliance; have all said a year later, “Wait a second, if you really want this to work, you got to do, not only the adjustments, but you have to give people the time to actually learn what we’re saying is an important new strategy for deeper learning for children.”

At the beginning of her remarks (4:40), Randi Weingarten told the AEI audience that she engages with AEI because she believes in vigorous debate. As an example (6:20) she said, “We will have a real share of vigorous debate at the our (AFT) Convention this summer. I have promised that we are going to have an hour debate on the Common Core on the floor of our Convention. In New York… we call debate conversation.” The AFT Convention was held one month after Weingarten’s conversation with AEI.

George Schmidt of Chicago’s Substance News documented the “conversation” that happened at the AFT Convention over Common Core:
It became apparent that it wasn’t going to be a debate about what’s best for the students, but what UFT -- and more broadly the leadership, which has always been centered in New York -- wanted. These “thugs” were not teachers, delegates noted. As the days of struggle unfolded, more and more delegates noted that they were bullies sent to block any attempt by the CTU to have an honest open debate about issues including Common Core, high stakes testing and special education in the context of "education reform" in 2014. The Educational Issues committee managed to shove through every resolution, including one supporting common core state standards for early childhood -- which is Pre-K – 3rd. The only resolution they did not push forward was anti-testing special education which was sent back to the executive council after a maneuver. It appeared to this reporter that the UFT was more interested in knocking down CTU resolutions than listening to the arguments and applying that information to the students they serve.
Also see The UFT’s Michael Mulgrew gets punchy. But only towards union members in the hall. | Fred Klonsky’s blog – August 7, 2014
Even Weingarten allies were outraged at how the AFT leadership stifled debate on the Common Core. After the Convention, Diane Ravitch commented:
Stephen Sawchuck did a good job reporting the heated debate about the Common Core standards at the AFT convention. The Chicago Teachers Union wanted to dump them. The head of the New York City United Federation of Teachers mocked the critics of the standards. One union official said that the critics represented the Tea Party. That’s pretty insulting to the Chicago Teachers Union and one-third of the AFT delegates, as well as people like Anthony Cody, Carol Burris, and me.
For a full description of the dispute over Common Core at the AFT Convention see Stephen Sawchuck’s column in Education Week AFT Common-Core Resolution Calls for Teacher Implementation.