Bernie Sanders has received lots of attention since his announcement of a new education platform for K-12.  While the Sanders plan is the only plan among twenty-some-odd candidates with any real specifics, the Sanders Plan falls far short of addressing the basic needs of children, teachers, and parents who depend upon public schools in the U. S.

However, an article just published by Nikhil Goyal at The Nation offers a positive take on the Sanders Plan.  Let's look at a couple of specifics: first, his position on charter schools.


Sanders announced that as president, in alignment with the NAACP, he would ban for-profit charter schools and impose a moratorium on federal dollars for charter expansion until a national audit was conducted. An audit would reveal that there are indeed many progressive, student-centered charters, such as High Tech High in San Diego, Minnesota New Country School, YouthBuild Charter School in Philadelphia, and Compass Charter School in Brooklyn. And those shouldn’t be shuttered.

We have to wonder if Team Sanders knows that if all for-profit charters were closed today, still over 85 percent of U. S. charter schools would remain open.

As for the proposed moratorium on "non-profit" charter expansion that would remain in effect until a national audit could be conducted, such a moratorium would leave open around 6,400 existing charters, most of which are either entirely apartheid or intensely segregated, and most are based on a total compliance lockdown instructional model that no middle class parent would ever consider for her own child.

As for the value of a national audit for charter operators, the suggestion by Sanders is that if a charter school has high test scores and clean bookkeeping, then it should continue to operate and expand, regardless of how many millions of "non-profit" public dollars are being siphoned away to build corporate education empires whose managers decide how segregated and disenfranchised children will be culturally sterilized in the no-excuses KIPP Model charter schools.

We have to ask ourselves, too, if a national audit would ignore more fine-grained details that show how "non-profit" charter chains legally shortchange instructional budgets while padding management and administrative costs.  Would an audit uncover the many ways that corporate charter grifters legally take public money from children and their teachers?

A couple of charts from 2015 research paper by Bruce Baker and Gary Miron demonstrate what I'm talking about.  Table 3 below shows how Texas charter schools compare with a major urban district in terms of expenditures.  We can see, for instance, how KIPP, Harmony, and other Texas charter schools spend a smaller percentage on instruction and a larger percentage on administration and plant services, when compared to Texas public schools that serve the same students.

We see, too, how charters depend upon a workforce model that exploits new teachers who are burned through, discarded, and replaced by more beginners.

Table 6 shows who the real beneficiaries are of public's generosity to fund a separate school system in  America.

Remember, too, that over 60 billion public dollars go to charter schools every year in this country.

How long can we afford this kind of support for a handful of amateur non-educators who are clueless about the art and science of education or the needs of children? 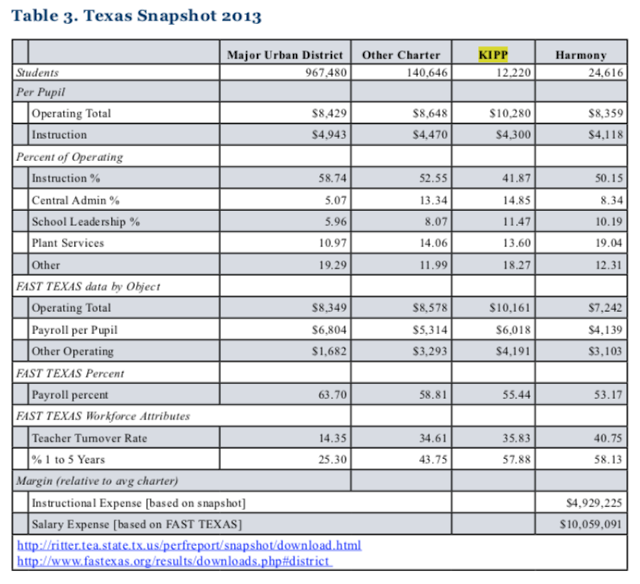 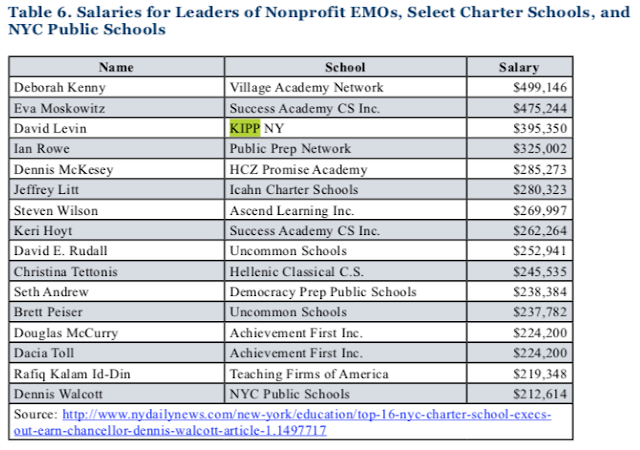