Paul Krugman won a Nobel Prize in Economics, but he is as dumb as the rest of us about politics--even though his status would never allow him to admit as much.

The morning after Super Tuesday, he offers this analysis on Twitter: 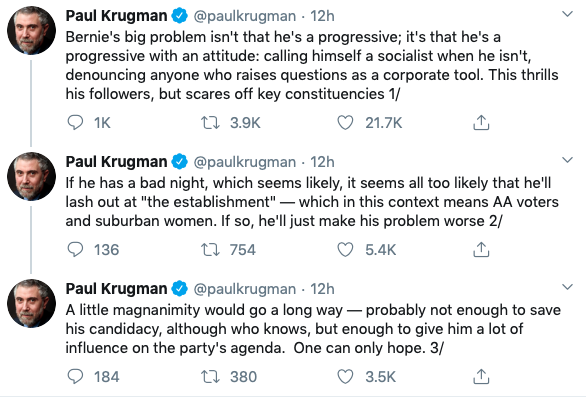 Of course, it's Bernie's fault that he lost. We know it has nothing to do with the former and current DNC kingpins pulling every lever of power and influence to scare the scared people into voting for Biden. If Bernie were just a little more "magnanimous," rather than uppity and honest--he would have had a chance on Super Tuesday.

And yet--if there was ever a time that honesty, brutal as it might sound, was required to address the imminence of climate catastrophe and mass extinctions, it is now. That is why the Biden victory yesterday is so utterly sad. Not because he won't beat Trump if nominated--any of the candidates would beat Trump--but because he will beat Trump and have nothing to offer to activate a solution to environmental calamity.

Biden's mirroring of Wall Street's necrophilous environmental policy will be catastrophic because it will ignore any remaining opening for action that we have during this decade.

If elected, Biden will leave us, then, with no option but to turn the movement that Bernie spawned in the U.S into the most massive guerilla operation of environmental death resistance that has not yet been imagined.

One outcome is certain; those who persist in the killing will not fare well, regardless of political label.
at 10:45 AM