KIPP Drops the Motto But Keeps the Brutality 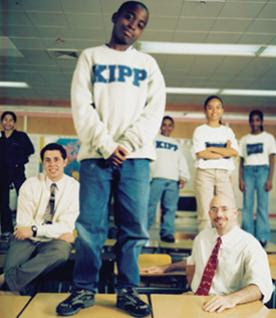 Four out of five students who started school at the Hampton Normal and Agricultural Institute during the decades just after the Civil War never earned their certificates of completion, even though academic expectations were far below schools for white students.  Getting booted from Hampton's residential program, you see, was more likely to come from a bad attitude, or bad character, than bad study habits.
Hampton's chief purpose, after all, was to inculcate in freed slaves and Western Indians a deep and abiding respect for hard work, above all else.  Secondarily, the purpose was to politically neuter Southern blacks and to assimilate Native Americans. As Captain Richard Pratt made infamous, "Kill the Indian, save the man."
The indoctrination at Hampton was non-stop, and most students who completed the program became teachers who were expected to fan out across the South to teach young black folks "the dignity of labor" and a ready acceptance of second-class citizenship, which had been earned, they were taught by white male instructors, by the inherent moral depravity of their race.
To earn the favor of the white philanthropists who supported Hampton's methods, and to advance in white Southern society, Blacks would need to labor diligently and to remain compliant without complaint. You might say, those indoctrinated in the Hampton Model schools were taught to work hard and to be nice.
I was gratified to see, then, in Jay Mathews' announcement yesterday that KIPP would be dropping its motto, "Work Hard, Be Nice," that Jay acknowledges the obvious connection between the 21st Century KIPP Model of African-American and Latinx schooling and the 19th Century Hampton Model of Black and American Indian schooling.
Mathews explains KIPP's decision to drop the motto this way:

The announcement quoted a former KIPP student saying: “Asking us to ‘be nice’ puts the onus on kids to be quiet, be compliant, be controlled. It doesn’t actively challenge us to disrupt the systems that are trying to control us.”

What will the new motto be, and what, if any, effect will it have on KIPP's ongoing programs to culturally sterilize, behaviorally neuter, and neurologically rewire young children to work efficiently within their chains of poverty?

We must remember that philanthrocapitalists and their politicians who support the KIPP Model do so because of its reputation for churning out gritty and grateful students who become gritty and grateful employees who are willing "work hard, be nice."  It took the Hampton Model forty years to finally begin to move toward the kind of quality education that current student of Hampton University enjoy.

And of course, Jay Mathews continues to spin for KIPP.  Some things never change.  I have heard the same spin from him so long, in fact, that I will use one of my earlier responses to another of his similarly misleading columns:

Mathews would have us believe that . . . [the] growth of KIPP resulted from two young geniuses inspired by a "magical" teacher godmother who sprinkled her fairy dust on them and gave them her blessing.

The facts, however, are a bit more complicated and prosaic.  KIPP sprang from the corporate conceptual ground provided by Teach for America and its market-centered and publicly-fed neoliberal agenda, and it was fertilized and manicured by tons of tax-sheltered cash provided initially by renowned conservative GAP founder, Donald Fisher.  It did not hurt, either, that KIPP was asked to do a skit at the 2000 National Republican Convention.

As for the godmother teacher in Jay's fairy tale, Harriet Ball, her ideas were harvested by the KIPP machine, and she was left unpaid for her intellectual property.

From the back cover:

James Anderson critically reinterprets the history of southern black education from Reconstruction to the Great Depression. By placing black schooling within a political, cultural, and economic context, he offers fresh insights into black commitment to education, the peculiar significance of Tuskegee Institute, and the conflicting goals of various philanthropic groups, among other matters.

Initially, ex-slaves attempted to create an educational system that would support and extend their emancipation, but their children were pushed into a system of industrial education that presupposed black political and economic subordination. This conception of education and social order--supported by northern industrial philanthropists, some black educators, and most southern school officials--conflicted with the aspirations of ex-slaves and their descendants, resulting at the turn of the century in a bitter national debate over the purposes of black education. Because blacks lacked economic and political power, white elites were able to control the structure and content of black elementary, secondary, normal, and college education during the first third of the twentieth century. Nonetheless, blacks persisted in their struggle to develop an educational system in accordance with their own needs and desires.