Fabiola St Hilaire is among a growing number of teachers from the "no excuses" cultural sterilization charter schools who are calling out the racist child abuse by charter chains like Success Academy. 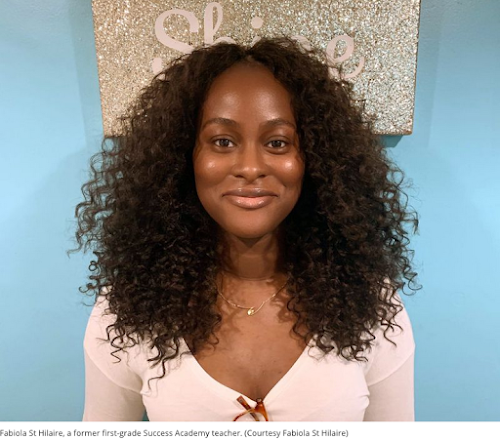 Working for this organization has truly showed me that as long as I stand with the inaction and blatant disregard for child morality and healthy development it in turn will make me complicit, which I will never be. --From former Success Academy teacher Fabiola St Hilaire's resignation letter

From a story by Michael Elsen-Rooney for New York Daily News:

. . . . For [some] educators and parents, however, Success’s approach feels heavy-handed and inflexible at a time when many families need the opposite.

“Just seeing how difficult it was for the kids to stay focused and still as they want them to be, it was like wow,” she said. “You see the fidgety bodies, you see the blank stares.”

Under the plan, kids as young as 5 have to log on by 8:50 a.m. wearing their checkered orange and blue uniforms, pictured here, and sit still with their hands clasped for nearly seven hours of live video instruction. . . .

. . . .The Far Rockaway mom whose little girl spends her mornings in tears urged the network to rethink its approach.

“I think it’s unrealistic expectations for a 6 year old,” she said. “I don’t know how this is going to work every day until 4:30.”

Just months ago, [former SA teacher, Fabiola] St Hilaire helped spark a racial reckoning at the charter network, which mostly serves Black and Hispanic students, when she publicly challenged CEO Eva Moskowitz’s response to the police killing of George Floyd. That prompted a flood of social media posts from current and former students, parents and teachers decrying entrenched racism in the charter network.

Officials promised to redouble their efforts on anti-bias training and hiring staffers of color, but St Hilaire said she saw few changes.

The revamped remote learning regimen was the last straw, she said.

“Working for this organization has truly showed me that as long as I stand with the inaction and blatant disregard for child morality and healthy development it in turn will make me complicit, which I will never be,” she wrote in her resignation letter, a copy of which was reviewed by The News.

Another Success teacher, who asked to remain anonymous for fear of retaliation, said she resigned in part over misgivings about penalizing students struggling with tech issues or being out of uniform.

“I want to work at a place that I can defend and stand behind,” the teacher told The News. “And I didn’t feel I could stand behind the policies they were asking us to carry out.” . . .