The Sunny Side of Corruption by Jay Mathews

American print media's most prominent charter school cheerleader is at it again.  In his most recent Washington Post column, Jay Mathews is preaching the virtues of IDEA Charter Schools, Inc., which recently lost its CEO founder and other senior leaders due to corruption charges involving private jets, NBA sky boxes, and routine use of public funds for "personal benefit:"

A financial investigation “uncovered substantial evidence that … a small number of IDEA senior leaders directed the use of IDEA financial and staff resources for their personal benefit on multiple occasions,” Board Chair Al Lopez wrote in a letter Tuesday. “Furthermore, their actions appeared to be done in a manner to avoid detection by the standard external audit and internal control processes that the Board had in place at the time.”

None of this corruption or efforts to conceal the crimes could ever dampen Jay's enthusiasm, however.  Nor has Mathews departed from his unique brand of dissembling propaganda. Just one example from this latest column:

When we go to the actual research report that includes Jay's numbers, we find the details that put a whole new light on Jay's sunny summary.  From the Credo Study, 2013, p. 22 Executive Summary:

Figure 8 shows the performance of charter schools relative to the TPS in their market. Based on our analyses, we found 25 percent of schools had significantly stronger growth than their TPS market counterparts in reading, 56 percent were not significantly different and 19 percent of schools had weaker growth. In math, the results show that 29 percent of charter schools had stronger growth than their TPS market counterparts, 40 percent had growth that was not significantly different, and 31 percent had weaker growth. These results were an improvement over those in the 2009 report. 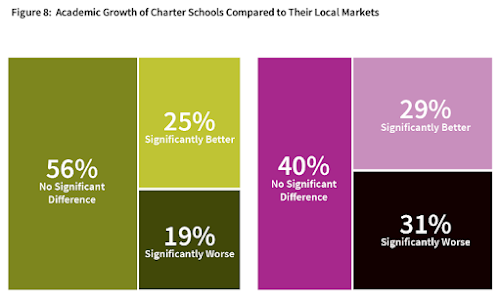