From CEDU to Brown Schools to Camelot Schools, Inc. 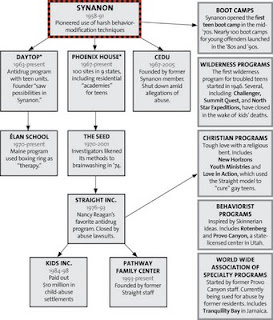 Much of the brainwashing, behavioral cruelty, and psychological abuse that is so common in "tough love" and "no excuses" school environments of today was inspired by an anti-drug treatment cult called Syanon. Synanon's methods inspired a number of residential treatment and "educational" centers, one of which was CEDU, a questionable outfit that was bought by the Brown Schools in 1998. At that time the CEO of the Brown Schools was a successful entrepreneur, John Harcourt, Jr.:


“It is this Company’s goal to provide the highest quality specialty behavioral and educational services to our country’s youth,” Riley said. “With the newly-formed Educational Services division that was created with the recent acquisition of CEDU, the country’s leading provider of therapeutic and emotional growth education; The Brown Schools has significantly strengthened its commitment to children and their families.”

In the letter below to consultants for the operation, Harcourt basks in the recent acquisition of CEDU. From ZoomInfo:


Posted by by Cindy White from letter of John P. Harcourt, Jr. President and CEO, CEDU Family of Services, The Brown Schools on Tuesday, 10 November 1998, at 9:09 a.m. (eastern time)

It has now been a couple of months since the Brown Schools acquired the CEDU Family of Services. What an exciting couple of months it has been! In this short transition period, I have had a chance to speak with a number of our parents, consultants, and others regarding the alliance. I hear a lot of the same questions from one person to the next, and thought it might be helpful for me to address some of these questions with you.

As many of you know, the histories of both CEDU and the Brown Schools are remarkably similar. Both organizations continue to be driven by values, passion, and the dedication to their individual founders. Both are committed to making families whole again. Of course, these are precisely the factors that drove The Brown Schools to acquire CEDU.

While the Brown Schools and CEDU share similar histories and values, both organizations respect the differences in those whom we serve: children, families and consultants. We recognize the unique differences between The Brown Schools and CEDU in methodologies, philosophies, and procedures of both organizations. As such, I would like to assure you that we have no intention of changing the fundamental missions or procedures of either organization. We look to creatd strength in our differences and in the variety of diverse options we provide for families. To do this, it is vital that each organization remain unique.

At CEDU, we will strive for an even higher level of service to our referrals. To that end, I am pleased to report that Saul Rudman, who had announced his intention to resign his position as Marketing Director prior to the acquisition, will be working with CEDU and The Brown Schools as a Consultant to help us achieve our goals.

Of equal interest to you, I am delighted that Lori Armbruster will continue on as CEDU's Director of Consultant Services. We will be adding a Consultant Services Manager in Southern California to assist you with referrals, updating, communication, and visits at CEDU High School and Middle School. Lori will also oversee this position and will always be available to assist you.

Jude Rudolph will move from her position as Admissions Director at ASCENT to the new position of Regional Service Coordinator in Denver, Colorado. Jude will work closely with families and professionals in Colorado, New Mexico and Arizona. Paul Johnson, whom you may already know, will be dedicated to meeting your communication and enrollment needs at ASCENT. Those of you who know Ranel Hanson will be pleased to know that she will continue her role as Parent and Alumni Services Director.

I look forward to seeing those of you who will be at the Fall IECA Conference in Atlanta. In the meantime, please feel free to call anyone at CEDU, including myself, with any questions you may have. Thank you for your support of our work in the past. Please help us to serve you and your clients even better in the future.

CEDU did, indeed, go bust in 2005, along with Brown Schools that owned it. Through a number of legal manipulations, CEDU/Brown avoided settling a number of lawsuits involving mistreatment, sexual abuse of employees, deceptive practices, etc. From the Austin American Statesman in 2005:


In recent months, three Austin lawyers say, Brown Schools Inc. offered to settle claims by their clients for everything from sexual abuse by its employees to deceptive business practices.

But there was a catch, according to the lawyers: Brown Schools said the plaintiffs had to accept less money and delayed payments so that the Austin-based company, which operates facilities for troubled children, could avoid bankruptcy, a filing that would likely have left the families with nothing.

On March 25, Brown Schools filed for Chapter 7 liquidation in Bankruptcy Court, jeopardizing all of the payments. Most of the company's facilities have closed, putting 700 employees out of work. . . .

Where did the CEDU/Brown assets go, and where did the Brown School leaders end up? The Brown Schools leaders, including John Harcourt, ended up running Camelot Schools, with the same finesse, we may assume, that they ran the Brown/CEDU operation.

So where am am I going with all this? A few days ago the Philadelphia Inquirer reported that a Philly charter school, consultant, Brien Gardiner, had committed suicide. Gardiner was under investigation for thievery and other forms of corruption related to his work for a number of charter school outfits, including one called Camelot Schools of Pennslyvania. Gardiner had been instrumental in guiding Camelot to part of the $40 million that Philadelphia schoolman, Paul Vallas, was paying out to have Philadelphia's "high-need" students professionally handled.

This is where this little story gets interesting, because in the news piece below from May 14, there is some clear indication that some of the school district officials in Philly smell something rotten about this Camelot deal. With Gardiner dead and the contract up for renewal, this has turned into quite a little corporate charter school mystery:

From the Philadelphia Inquirer:

PHILADELPHIA School District officials are reviewing the background of a company with $13.1 million in contracts to run three alternative schools, after a city councilman raised concerns about the firm's ties to treatment centers at which five students died.

The company, Camelot Schools of Pennsylvania, also had ties to Brien N. Gardiner, founder of the Philadelphia Academy Charter School, who had been under federal investigation when he committed suicide yesterday.

On Tuesday, during budget hearings at City Hall, Councilman James Kenney asked the district to reconsider renewing its contracts with Camelot Schools, saying that he had heard reports that the firm was managed by some of the same executives who once ran problem-plagued centers for troubled children.

Five students at those centers died after being physically restrained, according to a Texas teachers' union official.

"When you're talking about issues related to child safety, I just want them to make sure they look under every rock," Kenney said yesterday.

In 2000, a 9-year-old Nevada boy died of a heart attack a day after he was held facedown by employees at the Laurel Ridge Treatment Center, in San Antonio, Texas, for throwing a temper tantrum, the San Antonio Express-News reported at the time.

Laurel Ridge was run by the Brown Schools, a now-defunct company that operated 11 treatment centers in several states for children with emotional and behavioral problems, according to Gayle Fallon, a top official of the Houston Federation of Teachers.

Camelot Schools has contracts worth $13.1 million to run the Excel Academy, an alternative school for "over-age" high school students on Bustleton Avenue, near Harbison, in the Northeast; and two disciplinary schools, Daniel Boone, at 26th and Jefferson streets, Strawberry Mansion, and Shallcross, at Woodhaven Road near Knights, in the Far Northeast.

Todd Bock, Camelot senior vice president for education services, said yesterday that he and others had been officers of both firms, but adamantly denied that his firm was the latest incarnation of Brown Schools, which went bankrupt in 2005.

"Camelot Schools is not Brown Schools," Bock said yesterday. "That's like the difference between IBM and Apple. They never have been affiliated.

"Whoever is putting that piece of information out clearly does not have the facts correct . . .

Facts correct? You need some correct facts, Todd? Here are some facts for you and your creepy outfit that should be shut down with the rest of the school prisons that our tax money funds all over the country. IBM and Apple? Great analogy, Todd--since both perform exactly the same functions.

From a cached page at Zoom Info on the main of Camelot Schools, Inc.

Dayna Stewart – Vice President of Corporate Development
Before joining Camelot in early 2006, Ms. Stewart was Vice President of Marketing, Development & Oversight of Implementation for Childhelp, Inc., where she managed multi-state operations for programs in California, Arizona, Tennessee, Virginia and Michigan. Her responsibilities included operations, finance, marketing, referral development, contract negotiations and board management. Prior to that, she was Vice President for Marketing and Development at MHM Services, a business that provides mental health services for correctional facilities. Ms. Stewart was formerly associated with The Brown Schools as Vice President for Development where she was responsible for acquisitions and development and Cornell Corrections, Inc. where she was responsible for marketing and development for the juvenile division. [ This email address is being protected from spam bots, you need Javascript enabled to view it ]

Rod Young – Chief Operating Officer
Mr. Young joined the Company in 2005 as Chief Executive Officer of Desert Springs Medical Center. He was previously employed as Vice President, Public Education Operations and Vice President, Administrative Services at The Brown Schools/CEDU Education, a position he held for 6 years. From 1986 until joining The Brown Schools, he held Human Resources Executive positions at Per-Se Technologies, a medical software company, and Charter Behavioral Health Systems. [ This email address is being protected from spam bots, you need Javascript enabled to view it ]

Todd Bock - Executive Vice President and Chief Operating Officer, Camelot PA
Mr. Bock joined Camelot PA in 2003. He was previously employed by the Glen Mills Schools (a behavioral institution for children) and more recently at the Brown Schools. Mr. Bock holds a B.S. from Kutztown University of Pennsylvania and has over 10 years of management experience operating for-profit educational programs for at-risk youth. His recognized specialty is the management of school programs for children with behavioral, emotional and developmental challenges. Under John Harcourt’s direction at the Brown Schools, Mr. Bock developed a public school partnership program with the school district of Houston, TX. The Houston program was highly successful and allowed Mr. Bock to apply his discipline and behavioral expertise to a public school environment, a model that the Company has successfully extended to Philadelphia. [ This email address is being protected from spam bots, you need Javascript enabled to view it ]

Timothy Kenna – Vice President of Finance / CFO
Mr. Kenna joined Camelot in late 2004. He has 25 years of experience in the healthcare field. Prior to joining the Company, Mr. Kenna was CEO and CFO at Fort Lauderdale Hospital, a private psychiatric hospital located in Fort Lauderdale, Florida. Prior to his Fort Lauderdale experience, Mr. Kenna held CFO positions at three other private psychiatric hospitals located in New York, Illinois and Texas. He has a B.S. in accounting from the University of Wisconsin. [ This email address is being protected from spam bots, you need Javascript enabled to view it ]

Camelot in now operating in New Orleans. It seems that everywhere Paul Vallas goes that Camelot is not far behind? Plenty of those "high need" students still living in those poisoned FEMA trailers.