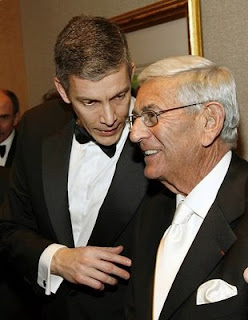 Broad Inauguration Party in Washington D.C., Tuesday, Jan. 20, 2009. (Photo/Stuart Ramson)
While many of us were out busting our humps to gather up a few dollars and votes for the change we thought we could believe in, the Harvard boys were cutting backroom deals with the multi-billionaire oligarchs to fully engage their plan to corporatize American public education, beginning with the urban schools.

There is no wonder that Spellings and Paige were running around breathless and wild-eyed, even as it became clear that McCain was going down. The insiders knew the Bush charter plan would not only go forward under Obama, but it would be slammed into overdrive by the clan of vulture capitalists and tax credit leeches who paid plenty to play the high stakes game for control of American schooling.

From The Nation's Dana Goldstein, where the story picks up on Obama's decision to invite the three stooges to the White House recently to proclaim the new post-partisan victory for philanthro-capitalism, disguised neatly under the banner of civil rights--with one particularly well-paid civil rights advocate getting a half-million for his time:

. . . the single-mindedness--some would say obsessiveness--of the reformers' focus on these specific policy levers ["free market competition"] puts off more traditional Democratic education experts and unionists. As they see it, with the vast majority of poor children educated in traditional public schools, education reform must focus on improving the management of the public system and the quality of its services--not just on supporting charter schools. What's more, social science has long been clear on the fact that poverty and segregation influence students' academic outcomes at least as much as do teachers and schools.

Obama's decision to invite representatives of only one side of this divide to the Oval Office confirmed what many suspected: the new administration--despite internal sympathy for the "broader, bolder approach"--is eager to affiliate itself with the bipartisan flash and pizazz around the new education reformers. The risk is that in doing so the administration will alienate supporters with a more nuanced view of education policy. What's more, critics contend that free-market education reform is a top-down movement that is struggling to build relationships with parents and community activists, the folks who typically support local schools and mobilize neighbors on their behalf.

So keenly aware of this deficit are education reformers that a number of influential players were involved in the payment of $500,000 to Sharpton's nearly broke nonprofit, the National Action Network, in order to procure Sharpton as a national spokesman for the EEP. And Sharpton's presence has unquestionably benefited the EEP coalition, ensuring media attention and grassroots African-American crowds at events like the one held during Obama's inauguration festivities, at Cardozo High School in Washington.

"Sharpton was a pretty big draw," says Washington schools chancellor Michelle Rhee, recalling the boisterous crowd at Cardozo. Rhee is known for shutting down schools and aggressively pursuing a private sector-financed merit pay program. Some of the locals who came out to hear Sharpton booed Rhee's speech at the same event, despite the fact that her policies embody the movement for which Sharpton speaks.

The $500,000 donation to Sharpton's organization was revealed by New York Daily News columnist Juan González on April 1, as the EEP and National Action Network were co-hosting a two-day summit in Harlem, attended by luminaries including Chicago schools CEO Arne Duncan. The money originated in the coffers of Plainfield Asset Management, a Connecticut-based hedge fund whose managing director is former New York City schools chancellor Harold Levy, an ally of the current chancellor, Joel Klein. Plainfield has invested in Playboy, horse racetracks and biofuels. But the company did not donate the money directly to Sharpton. Rather, in what appears to have been an attempt to cover tracks, the $500,000 was given to a nonprofit entity called Education Reform Now, which has no employees. (According to IRS filings, Education Reform Now had never before accepted a donation of more than $92,500.) That group, in turn, funneled the $500,000 to Sharpton's nonprofit.

If one person is at the center of this close-knit nexus of Wall Street and education reform interests, it is Joe Williams, who serves as president and treasurer of the EEP's board and is also the executive director of Education Reform Now. But it is through his day job that Williams, a former education reporter for the Daily News, exerts the most influence. He is executive director of Democrats for Education Reform (DFER), a four-year-old PAC that has gained considerable influence, raising $2 million in 2008 and demonstrating remarkable public relations savvy.

The group's six-person team works out of an East Forty-fifth Street office donated--rent-free--by the hedge fund Khronos LLC. In recent months, DFER has had a number of high-profile successes, chief among them a highly coordinated media campaign to call into question the work of Obama education adviser Linda Darling-Hammond, once considered a top contender for the job of education secretary. During the same week in early December, the New York Times, Washington Post, Wall Street Journal and Boston Globe published editorials or op-eds based on DFER's anti-Darling-Hammond talking points, which focused on the Stanford professor's criticisms of Teach for America and other alternative-certification programs for teachers. Less than two weeks later, Obama appointed DFER's choice to the Education Department post, Chicago schools CEO Duncan.

During campaign season, DFER donated to House majority whip James Clyburn, Senator Mark Warner and Virginia swing district winner Representative Tom Periello, among others. The organization regularly hosts events introducing education reformers like Rhee and Fenty to New York City "edupreneurs," finance industry players for whom education reform is a sideline. DFER is focused on opening a second office, in Colorado, a state viewed as being in the forefront of standards- and testing-based education reform. The group successfully promoted Denver schools superintendent Michael Bennett to fill the Senate seat vacated when Obama named Ken Salazar as interior secretary. Bennett led the school system with the highest-profile merit pay system in the nation.

During the Democratic Party's national convention in Denver this past August, DFER hosted a well-attended event at the Denver Museum of Art, during which Fenty, Booker, Klein, Sharpton and other well-known Democrats openly denigrated teachers unions, whose members accounted for 10 percent of DNCC delegates. With Clyburn and other veteran members of Congress in attendance, many longtime observers of Democratic politics believed the event represented a sea change in the party's education platform, the arrival of a new generation. While progressive groups such as Education Sector, Education Trust and the Citizens' Commission on Civil Rights have long attempted to push free-market education reforms to the Democratic Party, it is only with the arrival of DFER that the movement has had a lobbying arm with an explicit focus on influencing the political process through fundraising and media outreach.

"For a lot of groups that are dependent upon both private money and government money, there's a tendency not to want to get involved in the nitty-gritty of politics," Williams said in a March 31 phone interview from Denver, where he was meeting with Colorado politicians, setting the stage for DFER's expansion there. "Our group--what we do is politics. We make it clear: we're not an education reform group. We're a political reform group that focuses on education reform. That distinction matters because all of our partners are the actual education reform groups. We're trying to give them a climate where it's easier for them to do their work."

The education reformers who came to prominence in the 1990s, including the founders of Teach for America and the Knowledge Is Power Program, the national charter school network that fought unionization in one of its Brooklyn schools, often went to great lengths to portray themselves as explicitly apolitical. Nevertheless, "a lot of those people are, politically, Democrats," says Sara Mead, a DFER board member and director of early childhood programs at the Washington-based New America Foundation. "One of those things that DFER does that's really important is to help give those people a way to assert their identity as Democrats. It's important for those groups' long-term success, but also for Democrats, to the extent that some of these organizations are doing really good things for the kids whose parents are Democratic constituents. It's important that those organizations are identified with us rather than being co-opted by Republicans, as they were in the past." . . . .

So let's see, if I am working for a an outfit like KIPP or TFA, and I don't want to proclaim my political allegiance, I can funnel money through DFER to pay off the politicians who will make the decisions that favor the benefactors and oligarchs who are funding my programs. Is this what you might call non-identity politics??

I think this must signal the end of the two party system, since it no longer matters which party you belong to--in the end, the oligarchs will buy either.