CRT: Who Needs a Theory When the Historical Facts Say It All, Part 2

"Critical race theory is a practice. It's an approach to grappling with a history of White supremacy that rejects the belief that what's in the past is in the past, and that the laws and systems that grow from that past are detached from it," said Kimberlé Crenshaw, a founding critical race theorist and a law professor who teaches at UCLA and Columbia University. --CNN

If you don't like the definition supplied by one of the founders of CRT, then maybe you should ask State Senator Brian Kelsey (R-TN), who says that he knows what critical race theory because he was taught all about it in law school. According to Kelsey, critical race theory "teaches that American democracy is a lie. It teaches that the rule of law does not exist and is instead a series of power struggles among racial groups."

Not to be outdone in the Republican race for the dumbest, anti-factual definition, Governor Ricketts (NE) said this in response to a caller asking for a definition of critical race theory:

So, the critical race theory — and I can’t think of the author right off the top of my head who wrote about this — really had a theory that, at the high level, is one that really starts creating those divisions between us about defining who we are based on race and that sort of thing and really not about how to bring us together as Americans rather than — and dividing us and also having a lot of very socialist-type ideas about how that would be implemented in our state.

Kelsey's lies and Ricketts' pathetic word salad would be amusing if it weren't for the fact that the goal of white supremacists has much less to do with critical race theory than it does to 1) censoring the factual presentation of history in schools and the media, and 2) using intimidation to force teachers, school boards, and administrators into self-censoring with regards to the teaching of fact-based history and the discussion of race and racism in the classroom.

It is critical for teachers and their unions to continue rejecting the kind of propagandized and sanitized versions of history that neo-confederate politicians and their billionaire fascist funders prefer to offer school children and college students.

As noted in Part 1, the slavery empire in the United States was built one law at time. Many of those laws were written and passed in Virginia (see Pt. 1 for important laws from the 1600s).

Beginning in 1705, however, the Virginia Assembly passed and the Governor approved the Virginia Slave Codes, which set forth an unambiguous legal justification for slavery.  Hoping to avoid potential revolts that might accrue from alliances between poor whites and black slaves, the Slave Codes may be seen as an attempt to assuage oppressed whites by providing, if nothing else, a legal foundation for white supremacy and black inferiority.

Were the ancestors of today's bedraggled trailer park Tories those impoverished whites whose loyalty was bought by elites in 1705 with the legal promise and protections of white privilege??

By 1705, British settlers had lived in Virginia for almost 100 years. In the initial years of settlement, indentured servitude was widespread, African slavery was relatively uncommon, and race relations between blacks and whites were ambiguous, though not entirely equal. In the second half of the seventeenth century, however, the Chesapeake colonies transitioned to an economy dominated increasingly by slave labor. Virginia’s slave population grew from 150 in 1640, to nearly 3,000 in 1680, and by 1700 to13,000—one sixth of the colony’s population. This transition occurred because: (1) the supply of indentured servants in Virginia dropped as England offered more economic opportunities for its poor; 2) England established more colonies in North America, which diverted some immigrants away from Virginia; and (3) wealthy Virginia planters feared an alliance of poor whites and black slaves. White-black coalitions were an ever-present threat to the planters—Bacon’s Rebellion of 1676 had made that clear.

As the slave population increased, so did the legal controls on slaves’ behavior and power, culminating in the extensive law of 1705. The Virginia Slave code mandated an inferior racial and legal status for blacks while simultaneously elevating opportunities for poor whites. Passed by the Virginia House of Burgesses, these laws denied blacks the traditional rights of Englishmen, including freedom of association, assembly, bearing arms, expression, and mobility, as well as protections against unreasonable search and seizure. The laws forbade non-whites from holding ecclesiastical, civil, or military office regardless of their status. Interestingly, the slave code also reinforced a tradition already prevalent in Virginia in which the children born of slave mothers would also be slaves. In effect, this made slavery . . . permanent and absolved white male planters from any punishment for the sexual exploitation of their female slaves. In numerous ways, this was a clear effort by whites in Virginia to consolidate power and perpetuate the institution of slavery.

Inspired by Virginia Slave Codes, Massachusetts passed its own version of a law to prohibit both marriage and fornication between whites and blacks. Notice that Massachusetts lawmakers eliminated the ban on fornication in 1786, thus protecting white officials from the threat of arrest.  At the same time, MA legislators extended the ban on marriage to include Indians. 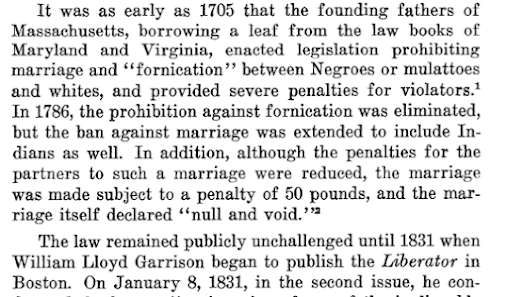