“Green Dot came and made it into more of a jail.” — Chris 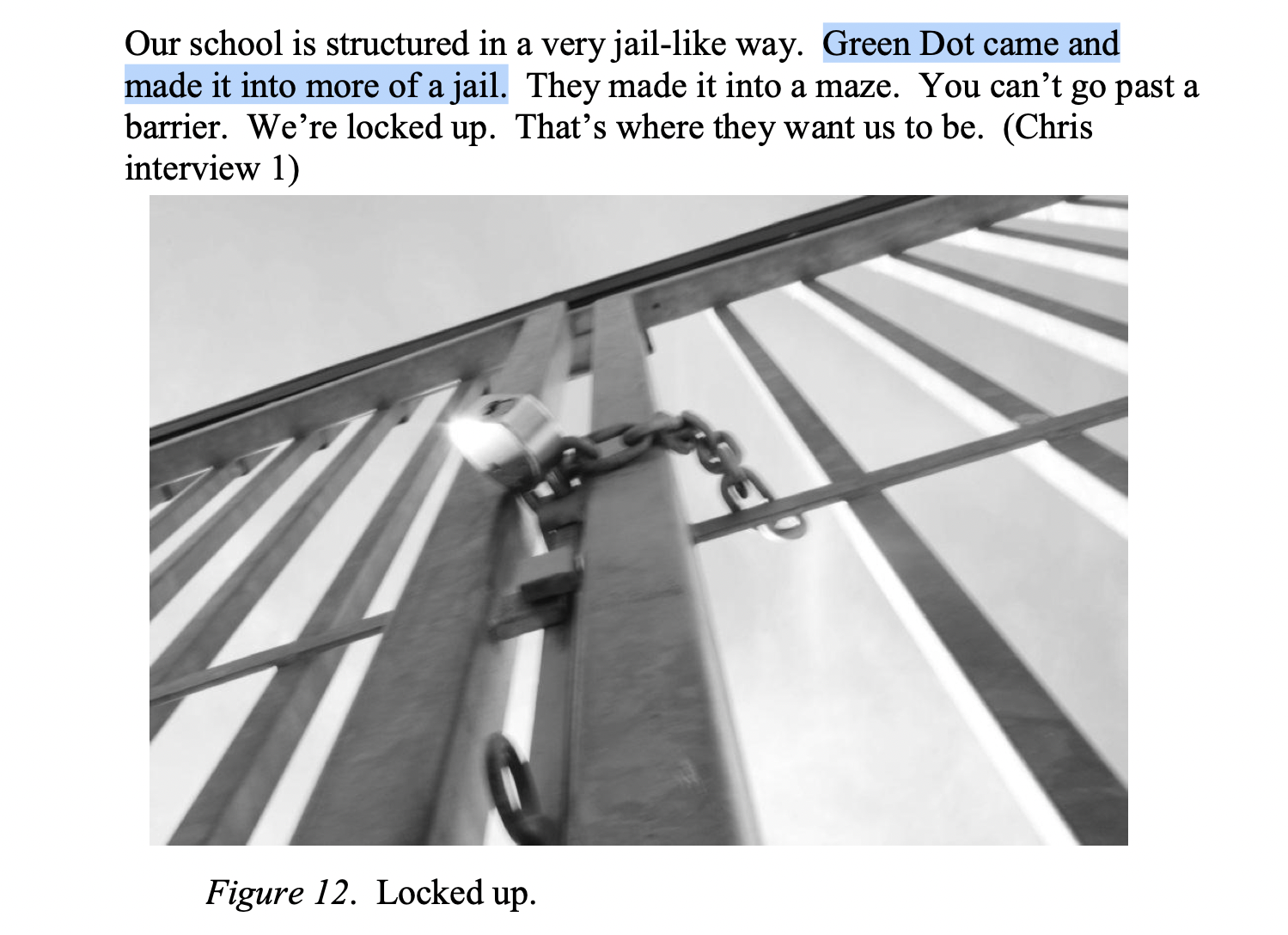 My history of opposing the Green Dot Charter School Corporation back when I was an activist is well known. On Schools Matter alone there’s over a dozen pieces I wrote on them.

These days, as an educational rights attorney, I’ve successfully litigated against the corporate charter chain on a few occasions. Today I had a legal research assignment that involved looking up information on them and I came across this academic paper:

Taken Over: The Story of the Locke High School Takeover Through a Qualitative Study of Student Voice

I only had a few minutes to skim through the paper, but it features some excellent feedback on how the students felt about the hostile take-over of a once public school by the corporate charter chain. Written through a Critical Race Theory (“CRT”) lens, the paper takes a student-centric view of what Green Dot did. It also exposes the intrinsic racism of Green Dot and its carceral, white supremacist campuses. Passage like this confirm what activists have said for years:

I recommend people check the paper out.

Reflecting back on the hostile Locke takeover, a couple of things come to mind. First, the takeover was, and still is, a disaster. The Green Dot Corporation had to restructure Locke a number of times as their failed management and policies played out. Second, Green Dot, which boasted it would dramatically improve student scores on racist and classist standardized tests, actually set records for having so many schools at the very bottom — including four Locke HS branches in the bottom 25 SAT scores in 2015.

Ironically, the well-healed, white executives running Green Dot at the time of the take-over boasted that they would “turn the school around” and make it a “great school” in short order. Boastful Marco Petruzzi claimed they’d do it in three years. Braggart Steve Barr said they’d do it in one. Neither prediction by the two non-educators came true. Green Dot has run Locke for more than a decade now. Where’s all the compliant press parroting bromides of how Green Dot “cracked the code”?

Petruzzi was a hedge fund manager prior to running the corporate charter school behemoth Green Dot. His lack of background in pedagogy showed in everything he did. Today he’s a furniture salesman. Truth is, Petruzzi’s always been a furniture salesman. This passage by one of his vendors sums up the real essense of the “education reformer,” Marco Petruzzi:

“…Marco Petruzzi, is an ex-Bain partner who joined Dovetail in 2018 to increase sales and profitability and overhaul their physical and technology infrastructure. Marco appreciates working with analysts that can make short work of thorny Excel problems, as well as going beyond spreadsheets to assist in the technical complexities of an ERP database migration.”

KPCC did a piece on how the Green Dot Charter Corporation did not meet its promises with Locke. This passage is instructive:

“Yet for all these improvements, Green Dot has also found out just how difficult it is to act on its initial promises. Locke High School's graduation rate — at 55.9 percent — is one of the lowest of any comprehensive high school in L.A. Unified, charter or otherwise.”

Caught this during further search: ‘The Myth of Charter Schools’ Marco Petruzzi, reply by Diane Ravitch.