"The lowest-performing, based on test scores, is the large Green Dot chain." — Los Angeles Times 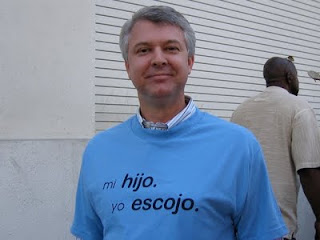 Wall Street privatization darling Marco Petruzzi (above) led a beleaguered Green Dot through charges of racism, embezzlement, poor performance, and now cheating. Green Dot Founder Steve Barr (below) created a mythology about his corporate charters that persists even today. Barr photo http://www.flickr.com/photos/kk/
CC BY-NC-SA 2.0.
There are some serious issues with Howard Blume and Sandra Poindexter's article entitled "L.A. Unified bests reform groups in most cases, data shows," but when the charter charlatans exposed in the piece start to foam at the mouth with hubris and hypocrisy, they need to be shown up for what they really are. The corporate crooks at Green Dot wasted no time writing an audacious fact-free response to the Los Angeles Times piece, ironically entitled "A call for accuracy in evaluating school progress."

Their amateurish essay is replete with sloppy prose and is the epitome of the corporate reformers' need to constantly shift metrics in order to fulfill their only goal — money making. Green Dot corporation, namely their well heeled CEO Marco Petruzzi, insisted that they would not only "turn" Locke around, but claimed that if we gave them three years, they would give us a great school. By anyone's reckoning they haven't delivered, and now they're moving the rhetorical goal-post in order to protect their powerful special interests. Showing even more hubris than Petruzzi was Green Dot's founder, Steve Barr, who boasted "We can turn around Locke High School in a year."

Let's be clear, the non-educators at Green Dot are claiming Retention, Rigor, and Results, but for Fall 2010 Locke Senior High Admissions into the California State University system: 88% were NOT proficient in mathematics and an astonishing 98% were NOT proficient in English. That's rigor? That's the result of A-G course preparation? So they get millions in extra funding, weed out most of their students with disabilities and students with disciplinary problems, but still only manage to get two percent of their students ready for college level English? Only a former hedge fund manager could be so mendacious. Those dismal proficiency scores are just Locke's dubious results, Green Dot's other "results" include three schools with the lowest 100 APIs in Los Angeles County. They also feature five schools with the lowest 35 average SAT scores in the County. Green Dot's wealthy white CEO asks us to "draw accurate conclusions" about his corporate charter empire, but wants us to ignore an overwhelming preponderance of evidence in the process.

While social justice activists are opposed to using test scores for punitive and other high stakes decision making, we have to bear in mind that Green Dot themselves uses these selfsame metrics to increase their market share and hostilely seize public schools like Locke. Suddenly, when those metrics don't favor them, Green Dot has spin galore about why they should be able to pick their own methodology for comparisons. How convenient for the lucrative corporate charter-voucher sector. Yet when we do the same for public schools we're "making excuses," "lowering expectations," or pandering to a chimerical "status quo." I recently called out another corporate reformer on this same double standard.

When we look at the scamsters and snake oil salesmen of Green Dot Charter Corporation, especially in the light of their recent cheating episodes, we need to understand that they will say and do anything to increase market share while continuing to "educate" poor children on the cheap. Given the not-so-rigorous results above, Green Dot's CEO should ignominiously resign, their unelected corporate board should be dissolved, and their schools should be converted to public schools within our school district. It's shameful that Green Dot is held up as a model, and it's unconscionable that the U.S. Secretary of Education Duncan went as far as to say that "they cracked the code" to turning around ailing schools. Green Dot has cracked the code to duping the public and does one thing well — it shovels money into the pockets of those who already had money to begin with. Our communities deserve far better, and we want democratically run schools, not privately run 501C3s run by incompetent businessmen.
at 4:35 PM