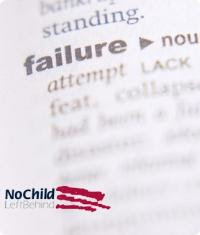 Per the Bush Administration's plan and the enabling dopey Dems, states like Minnesota now have almost half their public schools listed as failures. From the Twin Cities Daily Planet:

This clearly ridiculous finding is part of the federal No Child Left Behind law that requires states to test students in math, science and reading each year. Schools that don’t meet NCLB goals are publicly shamed and ultimately forced to reroute public money for poor children to private or public firms.

The benchmark for a passing grade rises each year. The process, called Adequate Yearly Progress, culminates in 2014 when every student must pass the test or the school will face punishment.

Every educator in Minnesota would welcome an assessment that fairly evaluates student growth, but results such as these show that NCLB test results are meaningless. . . .