How Obama Became a One-Termer 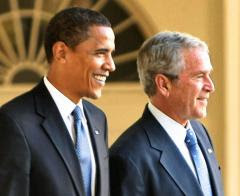 Continuing the idiocies of the Bush education policy is one thing, but continuing and accelerating the Bush evisceration of the Constitution is quite another kind of thing, one that will not stand with enough of those/us who put Obama where he is. Scrape your bumper--this honeymooner just moved for annulment.

From Glenn Greenwald at Salon:

New and worse secrecy and immunity claims from the Obama DOJ

When Congress immunized telecoms last August for their illegal participation in Bush's warrantless eavesdropping program, Senate Democratic apologists for telecom immunity repeatedly justified that action by pointing out that Bush officials who broke the law were not immunized -- only the telecoms. Here, for instance, is how Sen. Jay Rockefeller justified telecom immunity in a Washington Post Op-Ed:

Second, lawsuits against the government can go forward. There is little doubt that the government was operating in, at best, a legal gray area. If administration officials abused their power or improperly violated the privacy of innocent people, they must be held accountable. That is exactly why we rejected the White House's year-long push for blanket immunity covering government officials.

Taking them at their word, EFF -- which was the lead counsel in the lawsuits against the telecoms -- thereafter filed suit, in October, 2008, against the Bush administration and various Bush officials for illegally spying on the communications of Americans. They were seeking to make good on the promise made by Congressional Democrats: namely, that even though lawsuits against telecoms for illegal spying will not be allowed any longer, government officials who broke the law can still be held accountable.

But late Friday afternoon, the Obama DOJ filed the government's first response to EFF's lawsuit (.pdf), the first of its kind to seek damages against government officials under FISA, the Wiretap Act and other statutes, arising out of Bush's NSA program. But the Obama DOJ demanded dismissal of the entire lawsuit based on (1) its Bush-mimicking claim that the "state secrets" privilege bars any lawsuits against the Bush administration for illegal spying, and (2) a brand new "sovereign immunity" claim of breathtaking scope -- never before advanced even by the Bush administration -- that the Patriot Act bars any lawsuits of any kind for illegal government surveillance unless there is "willful disclosure" of the illegally intercepted communications.

In other words, beyond even the outrageously broad "state secrets" privilege invented by the Bush administration and now embraced fully by the Obama administration, the Obama DOJ has now invented a brand new claim of government immunity, one which literally asserts that the U.S. Government is free to intercept all of your communications (calls, emails and the like) and -- even if what they're doing is blatantly illegal and they know it's illegal -- you are barred from suing them unless they "willfully disclose" to the public what they have learned.

There are several notable aspects to what happened here with this new court filing from Obama:

(1) Unlike in the prior cases where the Obama DOJ embraced the Bush theory of state secrets -- in which the Obama DOJ was simply maintaining already-asserted arguments in those lawsuits by the Bush DOJ -- the motion filed on Friday was the first response of any kind to this lawsuit by the Government. Indeed, EFF filed the lawsuit in October but purposely agreed with Bush lawyers to an extension of the time to respond until April, in the hope that by making this Obama's case, and giving his DOJ officials months to consider what to do when first responding, they would receive a different response than the one they would have gotten from the Bush DOJ.

That didn't happen. This brief and this case are exclusively the Obama DOJ's, and the ample time that elapsed -- almost three full months -- makes clear that it was fully considered by Obama officials. Yet they responded exactly as the Bush DOJ would have. This demonstrates that the Obama DOJ plans to invoke the exact radical doctrines of executive secrecy which Bush used -- not only when the Obama DOJ is taking over a case from the Bush DOJ, but even when they are deciding what response should be made in the first instance. Everything for which Bush critics excoriated the Bush DOJ -- using an absurdly broad rendition of "state secrets" to block entire lawsuits from proceeding even where they allege radical lawbreaking by the President and inventing new claims of absolute legal immunity -- are now things the Obama DOJ has left no doubt it intends to embrace itself.

(2) It is hard to overstate how extremist is the "soverign immunity" argument which the Obama DOJ invented here in order to get rid of this lawsuit. I confirmed with both ACLU and EFF lawyers involved in numerous prior surveillance cases with the Bush administration that the Bush DOJ had never previously argued in any context that the Patriot Act bars all causes of action for any illegal surveillance in the absence of "willful disclosure." This is a brand new, extraordinarily broad claim of government immunity made for the first time ever by the Obama DOJ -- all in service of blocking EFF's lawsuit against Bush officials for illegal spying. As EFF's Kevin Bankston put it:

This is the first time [the DOJ] claimed sovereign immunity against Wiretap Act and Stored Communications Act claims. In other words, the administration is arguing that the U.S. can never be sued for spying that violates federal surveillance statutes, whether FISA, the Wiretap Act or the SCA.

Since EFF's lawsuit is the first to sue for actual damages under FISA and the Wiretap Act, it's arguable whether this immunity argument applied to any of the previous lawsuits. What is clear, though, is that the Bush DOJ, in any context, never articulated this bizarre view that all claims of illegal government surveillance are immunized in the absence of "willful disclosure" to the public of the intercepted communications. This is a brand new Obama DOJ invention to blanket themselves (and Bush officials) with extraordinary immunity even when they knowingly break our country's surveillance laws.

(3) Equally difficult to overstate is how identical the Obama DOJ now is to the Bush DOJ when it comes to its claims of executive secrecy -- not merely in substance but also tone and rhetoric (at least in the area of secrecy; there are still important differences -- no sweeping Article II lawbreaking powers and the like -- which shouldn't be overlooked). I defy anyone to read the Obama DOJ's brief here and identify even a single difference between what it says and what the Bush DOJ routinely said in the era of Cheney/Addington (other than the fact that Bush used to rely on secret claims of national security harm from Michael McConnell whereas Obama relies on secret claims filed by Dennis Blair). Even for those most cynical about what Obama was likely to do or not do in the civil liberties realm, reading this brief from the Obama DOJ is so striking -- and more than a little depressing -- given how indistinguishable it is from everything that poured out of the Bush DOJ regarding secrecy powers in order to evade all legal accountability.

Don't take my word for that. I mean: really, don't. Instead, I'm going to excerpt just a few of the key passages from the Obama DOJ's brief to convey a sense of how absolute is the Obama administration's claims of executive power and secrecy rights -- remember: all advanced in order to demand that courts not consider any claims that the Bush administration broke the law in how it spied on Americans (click on images to enlarge): 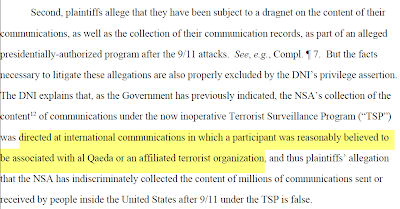 Every defining attribute of Bush's radical secrecy powers -- every one -- is found here, and in exactly the same tone and with the exact same mindset. Thus: how the U.S. government eavesdrops on its citizens is too secret to allow a court to determine its legality. We must just blindly accept the claims from the President's DNI that we will all be endangered if we allow courts to determine the legality of the President's actions. Even confirming or denying already publicly known facts -- such as the involvement of the telecoms and the massive data-mining programs -- would be too damaging to national security. Why? Because the DNI says so. It is not merely specific documents, but entire lawsuits, that must be dismissed in advance as soon as the privilege is asserted because "its very subject matter would inherently risk or require the disclosure of state secrets."

What's being asserted here by the Obama DOJ is the virtually absolute power of presidential secrecy, the right to break the law with no consequences, and immunity from surveillance lawsuits so sweeping that one can hardly believe that it's being claimed with a straight face. It is simply inexcusable for those who spent the last several years screaming when the Bush administration did exactly this to remain silent now or, worse, to search for excuses to justify this behavior. As EFF's Bankston put it:

President Obama promised the American people a new era of transparency, accountability, and respect for civil liberties. But with the Obama Justice Department continuing the Bush administration's cover-up of the National Security Agency's dragnet surveillance of millions of Americans, and insisting that the much-publicized warrantless wiretapping program is still a "secret" that cannot be reviewed by the courts, it feels like deja vu all over again.

This is the Obama DOJ's work and only its work, and it is equal to, and in some senses surpasses, the radical secrecy and immunity claims of the Bush administration.

Email ThisBlogThis!Share to TwitterShare to FacebookShare to Pinterest
Labels: Obama