"We therefore live in a period where the prevailing Zeitgeist is at least receptive to the notion that we do not have to be identical ethnically or linguistically." — Dr. Fernand de Varennes 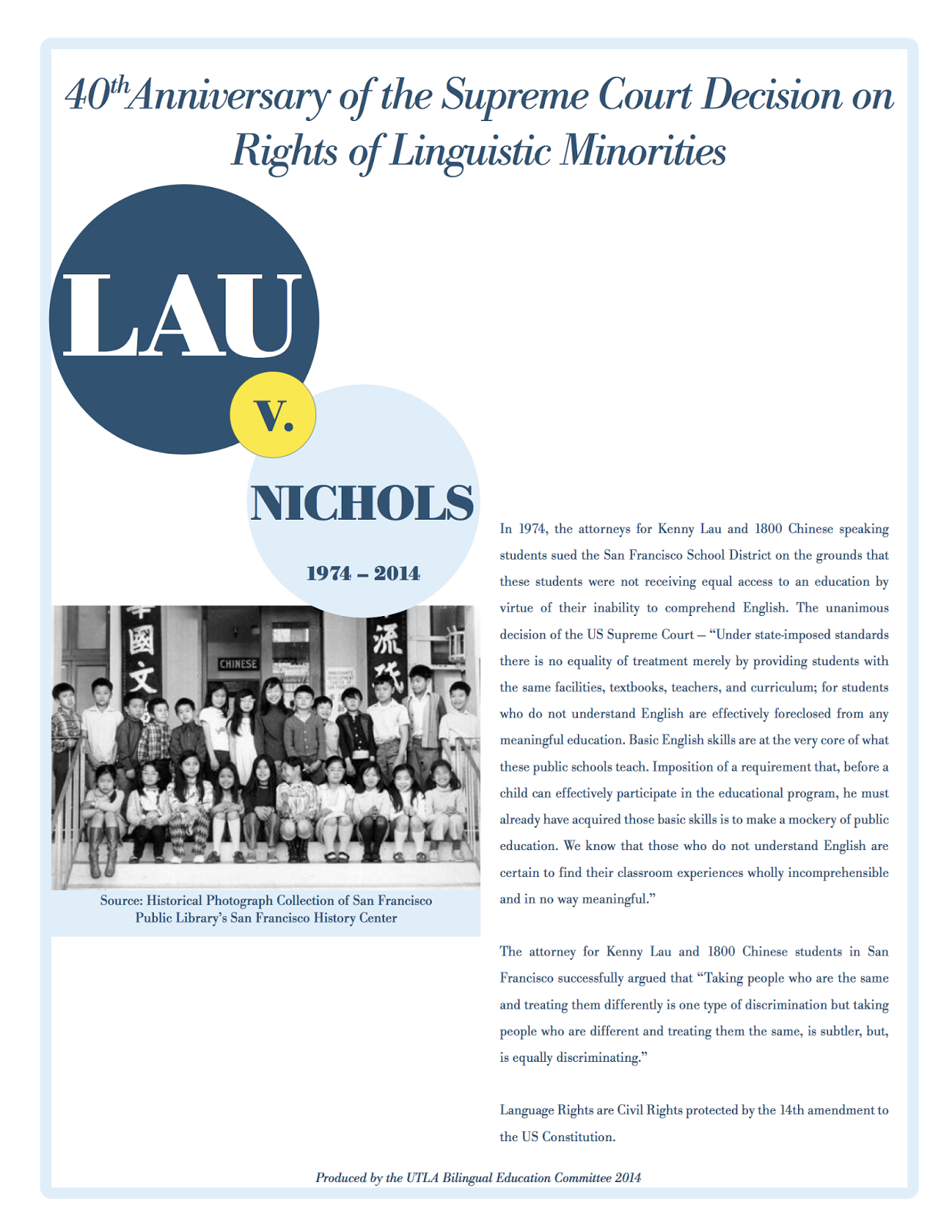 In an era where right-wing millionaires use their obscene wealth to finance arch-reactionary legal firms like Gibson, Dunn & Crutcher to craft deceptive causes of action to destroy academic freedom, students' access to experienced instructors, and workers' rights in the shape of the horrific Vergara decision, it's somewhat hard to recall that occasionally the law is used to help, rather than harm, the remaining institutions of public education.

In the past, when civil rights were more vigorously defended than David F. Welch's "corporate rights," a public interest attorney represented one of our most marginalized groups: English Language Learners (ELL) in a landmark case — Lau v. Nichols. The case and its implications for the rights of linguistic minorities are discussed below ["infra" in legal parlance]. Today, we see ongoing attacks against both ELLs and any language program besides mainstream English. A perfect example is that of neoliberal reactionary Marshall Tuck, a candidate for California State Superintendent of Instruction. Tuck, a graduate of anti-public education activist billionaire Eli Broad's Broad Residency, is best known for shuttering all the heritage language academic programs, and most of the dual language immersion programs at the schools he ran.

This year marks the fortieth anniversary of the Supreme Court decision on rights of linguistic minorities. While the promise of Lau is still yet unrealized, the recognition of language rights in the midst of our "white supremacist capitalist patriarchy" is still something to take notice of. United Teachers Los Angeles (UTLA) Bilingual Education Committee commissioned the following public service announcement flyer, the text of which is also reproduced here. The prose was written by UTLA's Director of Bilingual Education, Cheryl Ortega. Flyer design was by education activist Robert D. Skeels, who is also a first year law student at Peoples College of Law.

In 1974, the attorneys for Kenny Lau and 1800 Chinese speaking students sued the San Francisco School District on the grounds that these students were not receiving equal access to an education by virtue of their inability to comprehend English. The unanimous decision of the US Supreme Court - "Under state-imposed standards there is no equality of treatment merely by providing students with the same facilities, textbooks, teachers, and curriculum; for students who do not understand English are effectively foreclosed from any meaningful education. Basic English skills are at the very core of what these public schools teach. Imposition of a requirement that, before a child can effectively participate in the educational program, he must already have acquired those basic skills is to make a mockery of public education. We know that those who do not understand English are certain to find their classroom experiences wholly incomprehensible and in no way meaningful."

Language Rights are Civil Rights protected by the 14th amendment to the US Constitution.