Eli Broad and the Clintons 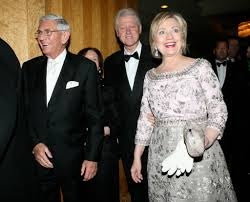 The Broads and the Clintons at the pre-ball dinner hosted by Eli Broad at the Inauguration of Barack Obama on January 20, 2009. Click here to view more pictures from the event.

For some people, sleep seems incidental. If you’re one of them, I envy you. Bill Clinton, who I have known since he was governor of Arkansas, sticks out in my mind as someone who does exceptionally well with very little rest.

While he was president, he invited me to stay at the White House. It had been a long day and I was tired, so I went to bed a bit early. At 11:30 PM, I woke up to a knock on the door. The president’s usher poked his head in and informed me the president was in the solarium and wanted to chat. There wasn’t much I could say except, “Sure.”

President Clinton came in, sat down, and began talking about everything–the Russian election, the Taiwan Strait, Israel, and why Kentucky was the best of the Final Four in that spring’s college basketball playoffs. We ended up going to bed not long before dawn.

During his presidency, Bill Clinton started the controversial practice of inviting political supporters to spend the night in the Lincoln Bedroom of the White House. Nearly 1000 White House guests gave more than $10 million in the 1990’s towards his reelection campaign and later to Hillary Clinton’s 2008 Presidential bid. One of the contributors was Eli Broad who gave more than $162,500. From January 1, 1995 to December 31, 1996 Broad gave $100,000 and listed his corporate affiliation as Truman Arnold Companies. Truman Arnold Companies is a $2.2 billion Texarkana, Texas petroleum marketing company. Clinton’s assistant District attorney, Webster Hubbell, who was convicted on corruption charges in 1994, was on the payroll of Truman Arnold and Sun America, Inc., “a California financial services company controlled by Eli Broad, a close Clinton friend who, like Rapoport and Arnold, stayed overnight at the White House.”

Eli Broad started accumulating his riches from a real estate company that he began with his wife’s cousin on borrowed money in 1957. Riding the crest of the expanding real estate market after World War II, particularly with the growth of suburbs around urban areas, Broad began building his millions, later to be billions, when he acquired Sun Life Insurance Company of America in 1971. In 1999, he sold SunAmerica to the American International Group (AIG) for $18 billion. For those who see accumulating wealth as the measure of a man, Broad became an icon fulfilling the American Dream’s Horatio Alger myth of the self-made man becoming incomprehensibly rich.

In 2000, Broad and his wife Edythe created the “philanthropy” The Broad Foundations. The “philanthropy” became a means for the Broads to bring their Horatio Alger myth to the arts and to education, having no background in either, and, along with other major “philanthropists” like the Gates Foundation and the Walton Foundation, he begin the reshaping of public education in the United States to fit a neoliberal agenda in the interests of the financial oligarchy the 1% is trying to form in the United States.

Bill Clinton’s all night White House meeting with Eli Broad, occurred as Clinton, under the guise of a progressive agenda, was advancing a neoliberal agenda during and after his presidency. Though he claims many of the reactionary laws during his Presidency were due to Republican intransigence, the Democrats controlled both legislative bodies during Clinton’s first term when most of these reactionary laws were passed. He continued with the policies of the Reagan years that were a counter-reform undermining the gains of Roosevelt’s New Deal and the Civil Rights movement of the ‘60’s. Corporate and financial interests had given these concessions because of fears that labor unrest in the 30’s and urban unrest in the 60’s would lead to a political movement that threatened the interests of the 1%. The repeal of the Glass-Steagall Act of 1932 benefited Clinton’s many White House guests and others in the 1% and have led to historic levels of wealth for the 1% even as it has impoverished the 99%. Clinton’s Violent Crime Control and Law Enforcement Act of 1994 led to an expansion of Reagan’s “War on Drugs” which creation a prison population that is the largest per capita in the world and an expansion of the death penalty for the low-income population. His Personal Responsibility and Work Opportunity Reconciliation Act of 1996, known as “welfare reform”, was to lead to an explosion of homelessness and low-income or no-income families falling into a poverty not seen since the Great Depression. The North Atlantic Free Trade Agreement (NAFTA) opened up corporations to low-wage workers in the developing world and gutted manufacturing in the United States. It is under these conditions that Eli Broad launched his “philanthropies”, including the Broad Superintendents Academy in 2000, to train and insert superintendents in school districts all around the United States who would advance a privatization of public schools agenda. Based on the right-wing economic theories of economist Milton Friedman corporate education reform began a fascistic agenda designed to reshape public schools financially and ideologically for the one percent.

Playing a central role in promoting Clinton’s neoliberal agenda was the Democratic Leadership Council. Formed in 1985 after the defeat of Walter Mondale and the reelection of Ronald Reagan, it became the think tank for many of the rightwing neoliberal policies promoted by Clinton. Clinton was head of the DLC in 1990 until he became President in 1992. A key player shepherding the neoliberal agenda during the Clinton Presidency and after was Bruce Reed who became head of the Democratic Leadership Council in 2001.


Unless the 99% gets its act together and launches a serious political challenge to the two-party system with a party with a program that represents the interests of the 99%, the November 2016 election will once again be a choice between the lesser of two evils. The problem is the evil just keeps getting worse.
Also see:
AFT Endorses Hillary
Diane Ravitch's Blog - July 11, 2015
Read the comments.

Ignored, Uninformed and for the GOP, Crazy for Charters: Presidential Candidates Get an F Grade on K-12 Public Education
Alternet - March 24, 2016
at 10:22 PM