“Though boosted through a language of choice and effectiveness, the charters provide neither. Public funds pay for a system that lacks oversight, transparency, and funnels millions of dollars to privateers, who pocket salaries upwards of $1 million.” — Dr. Megan French-Marcelin 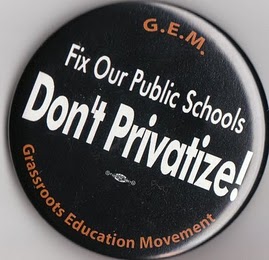 By now everyone has heard the wonderful news that the Washington State Supreme Court has ruled that charter schools are unconstitutional. This watershed holding and ruling has seen the neoliberal corporate education reform machine shift into overdrive to try and prevent the plug from being pulled from their profit pipeline. Dick Cheney's former aide Nina Rees, now CEO of NAPCS, published a ham fisted plea to save their cash cow in the Huffington Post. In additional to the charter school profit mongers being terrified, the neo-segregationists clamoring for school choice (read redlining) are also up in arms that the courts would require public funding to go to public, rather than private, institutions. As a second year law student, whose sole reason for wanting to be an attorney is to put an end to the neoliberal privatization of our schools, I am following this closely. I've posted the following thoughts in the comments of several places discussing the court's ruling:

By definition whether a charter is run by a for-profit firm, or a (501c3) non-profit, then it is not public. The United States Census Bureau frames this issue best: "A few "public charter schools" are run by public universities and municipalities. However, most charter schools are run by private nonprofit organizations and are therefore classified as private." (US Census Bureau. (2011). Public Education Finances: 2009 (GO9-ASPEF). Washington, DC: US Government Printing O ce. Print. vi).

Because these lucrative charter schools are not public, and are not subject to public oversight, they are able to get away with violating the constitutional rights of their students. The decision in Scott B. v. Board of Trustees of Orange County High School of the Arts saw Rosa K. Hirji, Esq. write: "The structures that allow charter schools to exist are marked by the absence of protections that are traditionally guaranteed by public education, protections that only become apparent and necessary when families and students begin to face a denial of what they were initially promised to be their right." It's time that we shut down the profitable charter school industry and divert our attentions to improving our public schools.