Connecting All the Green Dots 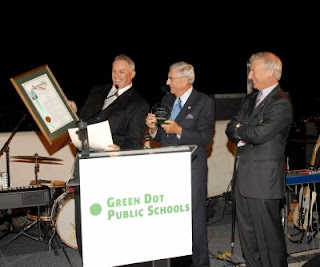 Reggie Dylan has an important piece of work at Dissident Voice. Here is a small taste:

. . . . In many ways Locke High School concentrates the utterly failed education system that “serves” the oppressed people in the urban cores of this country. In 2005 only 332 Locke students graduated from a class that, as ninth-graders, had 1,318. Only 143 students qualified for admission to the University of California and Cal State University systems. In March, 2005 a 15-year-old girl died after being shot in front of the school.

Even before the fight at Locke became national news, the L.A. school district had signed a contract agreeing to turn complete control of Locke over to a private charter school organization known as Green Dot Public Schools. (A charter school is a public school run by a private business or organization.) This isn’t the first charter school in the Los Angeles Unified School District (LAUSD). And it’s not the first of Green Dot’s charter schools in L.A.; they already operate twelve small charter schools. But this is the first time that any charter operation has been given sole responsibility for providing the public education that high school students receive in a section of a major urban ghetto.

This high-profile experiment in privatization is being looked to by the powers-that-be as a potential model for a radical transformation of the public education system in the most oppressed communities of the proletariat, especially Blacks and Latinos, not only throughout L.A., but nationwide. The Los Angeles Times wrote in a recent editorial, “[I]f it succeeds, Green Dot will have created a blueprint for public schools.”1

And a lot of people at Locke—parents, the teachers and administrators who stayed on, many students, and people all over—are hoping that Green Dot will actually be the model for “closing the achievement gap between black and Hispanic students and their white and Asian peers” that the sales pitch of the charter school movement promises.

Green Dot aims to produce a small number of students from inner city schools who will help fill the need for “knowledge workers” in this society—people who work with information, such as engineers, analysts, marketers, etc. And for those who do make it into the “knowledge worker” strata, to serve as a political and ideological force to shore up this system of exploitation and inequality—including by providing a basis to claim that “anyone” can make it in this system; a cruel lie when in fact, for millions and millions of youth in the inner cities, their so-called “opportunities” are the streets and a likely early death, prison, or the military. . ..