With Margaret Spellings getting in a final safari in Africa before she turns in her keys, and as the rest of the incompetent Bush cronies at ED are cleaning out their desks and working on their resumes, the White House has simply side-stepped the Departent of Education and issued its own propaganda response to a recent New York Times piece by Sam Dillon on the impossible testing targets that NCLB uses to undercut the public schools.

In a Letter to the Editor published yesterday, Domestic Policy Director, Karl Zinsmeister, both lied and dissembled in making claims regarding reading scores during the NCLB reign of terror:

Over the last five years, 9-year-olds in the United States have made more progress in reading than in the previous three decades combined. Achievement gaps between white and black students in reading and math are now the narrowest they have ever been.

The first sentence by Zinmeister is simply a bald-faced lie. Here is NAEP's own chart showing average reading scores for 4th grade students. It shows a 2 point gain since 2002. Before NCLB became law, between 2000 and 2002, there was a 6 point gain. (Click to enlarge chart).

And here is the NAEP chart on 8th grade reading averages, and the picture is even worse. It shows scores actually dropping a point since 2002. (Click to enlarge chart). 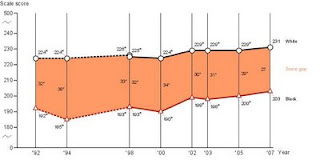 In terms of the achievement gap being the narrowest it has "ever been," the final chart from NAEP shows the reality. In 2002, there was a thirty point gap in 4th grade reading scale scores. That gap for 4th grade reading has narrowed by 2 points since 2002, even with the draconian full-time test prep chain gang teaching that has replaced caring teachers and balance curriculums in schools with mostly minority and/or poor students. (Click to enlarge chart).

It is long past time that these liars, dissemblers, and epistemological thugs be run out of Washington on a rail.
at 9:21 AM