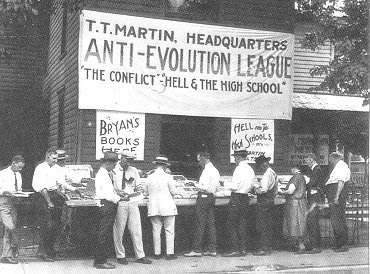 The theocrats strike again, and Rick Perry and Dr. Don McLeroy are at the head of creationist column. A clip from the NY Times:

. . . .Even as federal courts have banned the teaching of creationism and intelligent design in biology courses, social conservatives have gained 7 of 15 seats on the Texas board in recent years, and they enjoy the strong support of Gov. Rick Perry, a Republican.

The chairman of the board, Dr. Don McLeroy, a dentist, pushed in 2003 for a more skeptical version of evolution to be presented in the state’s textbooks, but could not get a majority to vote with him. Dr. McLeroy has said he does not believe in Darwin’s theory and thinks that Earth’s appearance is a recent geologic event, thousands of years old, not 4.5 billion as scientists contend. . . .