On July 17, 2008 Congressman George Miller brought before the Education and Labor Committee a small band of "Democratic" urban mayors and superintendents to share all the good news about autocratic control of urban public education. The list of honorable rogues offering testimony included Bloomberg, Klein, Fenty, Rhee, Duncan, and Beverly Hall from Atlanta.

After some googling the other day on some of the realities not mentioned in WaPo's recent PR piece for Duncan, I thought it would be interesting to do some fact-checking on Duncan's claims before the Committee last July. Was he sworn in? I guess not--otherwise, he surely would be serving time by now.

But before getting into that, I decided to have a look, too, at Congressman Miller's opening statement as it related to the alleged accomplishments of the Chicago Public Schools (CPS). Miller:

In Chicago, a city where nearly 85 percent of children live in poverty, the number of students meeting or exceeding expectations on the Illinois Standards Achievement Test rose by 23 percent, to 69 percent proficiency in math over the past two years.

The only ISAT scores that come to close to this 23 point gain took place in 8th grade, even though there are good reasons to discount some of the glory. Here are the math ISAT percentages at or above proficiency, as reported by the State of Illinois:
2005 32%
2006 64%
2007 71%
2008 70%
Now if Congressman Miller was, indeed, comparing 2005 to 2008, rather than "the past two year" as he said in his statement, that still does not add up. Was he too embarrassed to claim 38-point gain over four years? Or do his numbers reflect an average gain grades 3-8?

The ISAT, in fact, was realigned in 2006, which severely limits any valid score comparison of before and after the realignment. In the words of Jan Wright, Asst. Supt. of Batavia Public Schools in October 2008:

"Because of the changes in the ISAT in 2006, one cannot make any fair comparison to the data prior to 2006."

Here is a clip, too, from the Sun-Times 2007 story that offers some other information on the altered scaling of the 2006 ISAT, all of it ignored, of course, by the Duncan PR machine that, no doubt, provided the Congressman with his impressive numbers:

Numerous changes to the 2006 ISATs -- including extra time and a livelier format -- made some question whether the new tests were truly comparable to the old ones.

Plus, in eighth-grade math, the passing bar was lowered from the 67th to the 38th national percentile, to better conform with other tests. As a result, state passing rates soared by 24 percentage points, to 78 percent meeting state muster. In Chicago, they doubled.

But enough about the Congressman and his phony claims for CPS. Let's have a look at the claims that came from Mr. Duncan's own lips on July 17, 2008. Is there anything here that would show him as a candid fellow--or just another in long line of lying hacks

Claim # 1: In 2001, less than 40 percent of our kids met state standards. Today, almost two thirds do and more than two-thirds of our 8th graders are at or above state standards.

As noted by the Sun-Times article above, the realignment of the ISAT in 2006 accounts for much of the big gain that Duncan references. Otherwise, the ISAT percentages of students in grades 3-8 at or above state standard show much less dramatic increases. Scores in both reading and math actually went down in 2008 for 8th graders, for instance :
2005 Reading 59 Math 32
ISAT Realignment
2006 Reading 72 Math 64
2007 Reading 78 Math 71
2008 Reading 75 Math 70
Another tidbit not mentioned in Duncan's sales job before Congress: In math the achievement gap between low income and non-low income widened by 5 percentage points over five years, and in reading the achievement gap increased by 11 percentage points during the same time.

Now it is screamingly obvious to anyone who has looked at the Interactive Illinois Report Card maintained by the State Department of Education in Illinois we must not consider high schooler as "kids" if Mr. Duncan's Claim #1 is to be interpreted as just a bad-natured deception. If high school students are, indeed, kids, then Duncan is simply lying outright.

High school kids, you see, are given the Prairie State Achievement Examination (PSAE), and results here are stunning in light of Duncan's claim of almost tw0-thirds meeting state standard. This PSAE test has not been realigned and, therefore, cannot be manipulated by Duncan's staff to create false comparisons, as is the case with ISAT.

This composite score (PSAE) is derived by combining the ACT and three other tests given over two days, and they are used to measure academic strengths and weaknesses relative to the Illinois Learning Standards. Results of the PSAE are used, too, to determine high school AYP. Here are the results for Reading, Math, and Science from 2003 to 2008. Numbers reflect percentage of all 11th graders at or above State Standard:

Click chart below for better view in new window. 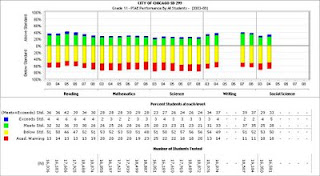 When these "kids" started kindergarten, Boss Daley had just recently assumed complete control of Chicago Public Schools in 1995. Contrary to Duncan's claim, I would estimate that two-thirds of these "kids" are below state standards. When we look at the poor and minorities, the numbers are even more disturbing. The percentage of black students meeting or exceeding the state standard went from 35% in 2005 to 22% in 2008. Hispanic achievement showed a 12-point drop from 40% to 28% of students meeting or exceeding the state standard. Asian students dropped from 64 to 53, and Native Americans sunk from 71% to 44%. (Black students and Hispanic students comprise the largest minority population groups in CPS, with 45% and 40% respectively).

Claim # 2: Our high school students are out-gaining the State of Illinois and the nation on the ACT test that is needed for admission to college.

Based on the figures from the Interactive Illinois Report Card, there is no place to go but up for most kids hoping to go to college from CPS. The percentage of Chicago (CPS) high school students meeting the College Readiness Benchmark as measured by the ACT has remained flat or gone down since the State began maintaining this record in 2006. Reading readiness has gone from 23% in 2006 to 21% in 2008. Math readiness inched up from 14% who are ready for college to 16%. Science, the most dismal of all, clicked up from 8% to 9% of students who are ready for college science. And English went from 41% to 39% from 2006 to 2008. Click chart below for better view in new window. 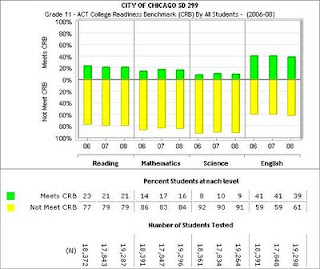 And below shows the staggering gaps between ethnic group ACT scores:
Click chart for better view in new window.

The website, Many Eyes, offers a graphic representation of how CPS high schools stack up (literally) on the ACT. Only a handful of CPS high schools exceed the State average ACT composite of 20.5, with the vast majority stuck between 14 and 18. (Click to enlarge).

Claim # 3: More and more of our high school students are taking college-level courses and more andmore of them are testing well enough to earn college credits.

Claim #4: On the national test comparing Chicago to other cities (NAEP) and to the nation – we’vegone up 11 point since 2002 while the nation has gone up just 3, so we’re closing the gap.

Another great example of cherry picking the data, this time from the NAEP Trial Urban District Assessment, which compares student scores in 4th and 8th grades from 11 urban district. By the way, CPS finished in 8th place overall, just ahead of the other recent miracle, Houston. Whereas previously Duncan was fixated on 8th grade scores, where he could ferret out the largest gains, Claim # 4 of an 8 point gain refers to 4th grade gains on the NAEP, where his staff found something to crow about:

Now if we look at the 8th grade, however, a very different picture emerges. But, then, a one point gain would hardly be something to brag about in front of a national audience. And we we certainly would not want to remind Congressman Miller that, based on 8th grade scores on the Nation's Report Card, that we are in reverse or neutral since NCLB went into effect.

Claim # 5: Hispanic students scored the highest of any other big city school district on this test so gains are being made among key subgroups as well.

Now we are back to 8th grade scores to make a point that is accurate, yes, but presents a misleading and obfuscating statement. This statement pretends that the "highest" applies to all students, when, in fact, the 4th grade Hispanic scores for CPS on NAEP's TUDA ranks them 6th out of 11 urban systems.

Claim # 6: We began tracking college acceptance rates three years ago and the numbers have risen every year. Today, over half of our graduates go to college.

The Gates-funded EPE Research Center in 2008 put CPS as 31st out of 50 (4 spots below #27, Houston) urban districts in dropout rate. According to EPE, Chicago's dropout rate is 51.5. So if half of Chicago's graduates go to college, then we may safely assume that 74% or so of Chicago high schoolers do not. One must wonder if Duncan's people are doing any tracking any of those students.

Claim # 7: This progress can be attributed to a few simple strategies that we have relentlessly
pursued since the City of Chicago – under the leadership of Mayor Richard Daley –assumed full control of the school system in 1995. The first thing we did was end social promotions – which is the shameless practice of passing children each year even though they are not ready – and ultimately graduating them without the skills they need to succeed.

Duncan praises Daley's dictatorial powers "full control." Fortunately for us, Daley and Duncan do not fully control the data that shows their sleazy sales pitch as disguising a threadbare record of real educational improvement, which has, in the meantime, canned the notion of democratic governance of public schools.

Yes, the shameless practice of social promotion was ended in 1995, when "Chicago adopted a policy that called for not promoting students who scored more than a year below grade level on national tests." Now here we are with some results 13 years later that lead us to conclude that not much has changed, except that many children have been and are failed regularly on their way into the school to prison pipeline.

And can we, in fact, say that "social promotion" has been eliminated when 86% of African-American 11th graders and 80% of Hispanic 11th graders in Chicago fail to meet Illinois's College Readiness Benchmark in 2008? Or when 91% of all 11th graders in Chicago fail to meet the CRB for Science? Or when 75% of low income Chicago 11th graders are below the State Standard on the PSAE? Is this really the end of social promotion, or is this just more of the same bullshit that another big city superintendent brought to Washington in 2001???