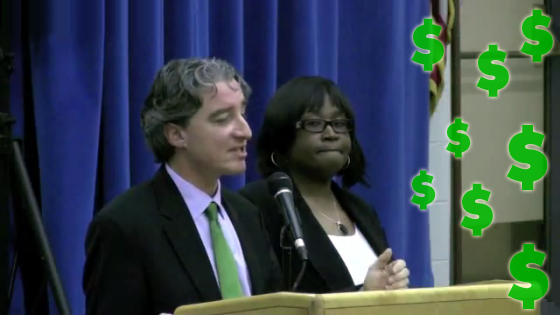 Our recent expose of Ben Austin's criminal involvement in passage of the charter market share growing gambit cynically named the Parent Empowerment Act pointed out the possibility of a cover up by the California State Board of Education (SBE) itself. Surprisingly, just a few days after publication of Pots, Kettles, and Ben Austin's Unconscionable Hypocrisy, did the SBE send documentation that I had been requesting for months.

Here's the letter, chances are Austin never read it himself since he has never felt the law applies to foppish elites like him.

In the letter, the SBE admonishes the avaricious Austin and tells him:

...please immediately discontinue any paid advocacy to the State Board of Education including advocacy on the Parent Empowerment regulations.


Of course, a stern letter — which knowing charter industry lackey Michael Kirst, was probably more of a nudge and a wink than anything else — did little to prevent the lawless Austin and his Walton Family Foundation funded minions from paid advocacy before, during, and after the entire process. No laws, regulations, rules, or ethics stood in the way of the entirely astroturf Parent Revolution ensuring their continued existence, since enabling school privatization is in fact their raison d'être. In a fair and just society, or even something resembling democracy, the law would be thrown out after such Machiavellian corporate manipulations.

The trigger law is pretty much universally despised by parents that have actually taken the time to look into who funded it, drew it up, and who it serves — those profiting from privatizing schools. However, some parents are liable to be bamboozled, browbeat, and bribed into supporting the measure, since they've been tricked by the corporate media and Arne Duncan into trusting deep pocketed corporations instead of their own agency. The only folks that like the law are extreme right wing groups like The Heartland Institute which has held forums with Parent Revolution extolling the trigger law and other free market fantasies.

I want to repost my initial description of the SBE letter here since it succinctly describes the letter and the circumstances:

Criminal mastermind Ben Austin, of the Walton, Broad, and Gates Foundation funded astroturf charter school proxy group Parent Revolution, illegally and unethically influenced the passage of the so-called Parent Empowerment Act (aka parent trigger) law. Although the State Board warned Austin that his actions were in violation, he and his group were able to circumvent democracy and get their charter school market share legislation pushed through the SBE. This letter vindicates my accusations of Austin's malfeasance in Pots, Kettles, and Ben Austin's Unconscionable Hypocrisy


Tomorrow morning I meet with a group of parents who requested that I help them combat Parent Revolution's paid right wing staffer Yuritzy Anaya, who is apparently already trying to privatize several schools in the San Gabriel Valley area with the tacit help of a neoliberal minded School District Board Member. Social justice activists and public education advocates must begin organizing struggle and grassroots resistance to the corporately sponsored Parent Revolution's onslaught before the entire pubic commons is turned over the rapacious charter school industry. ¡La lucha sigue y sigue!
at 1:54 AM