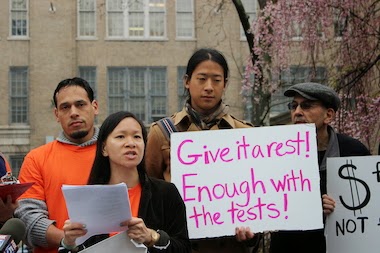 Teachers at a New York City high school fired a shot across the bow of the concept of a nationalized education industry Thursday, becoming the first in that state to refuse to administer a standardized test tied to the controversial Common Core national standards.
The boycott by teachers at Prospect Heights International School in Brooklyn comes amid a small but growing “opt out” movement in which thousands of parents across the country have refused to let their children sit for standardized tests tied to Common Core’s data-hungry student assessment industry.
The state assessments are given at least twice a year, and a growing number of parents are choosing to “opt out,” saying the tests cause anxiety and other health problems in young children. Still others have refused the tests because of data mining conducted on students by the companies that write and analyze the tests.
If the movement needed a jolt, it came from the most unlikely of places, a high school that caters mostly to New York City’s immigrant community. About 95 percent of the students at Prospect Heights are learning English as a second language.
The teachers held a press conference Thursday morning to announce their refusal to administer the NYC English Language Arts Performance Assessment. They were photographed by friends and family holding signs that said “Fewer tests, fewer tears” and other slogans. They said they refused to administer a test that is part of the new teacher evaluation system pushed by Mayor Bloomberg and the United Federation of Teachers as part of Common Core.
No fewer than half the parents at Prospect Heights have opted their children out of the test, according to an April 28 letter sent to the school system chancellor by 30 teachers and staff, a copy of which has been obtained by WND.
In accordance with Common Core standards, part of teachers’ annual evaluations is tied to the test scores their students receive on state-sponsored, standardized tests.
“We understand our decision to abstain from administering the test may impact aspects of our evaluations. Despite the potentially negative consequences, our professional judgment dictates that we cannot participate in this assessment,” the letter from the teachers stated. “We are not willing to sacrifice the trust of our students, their feelings of self worth, and our professional duty to do what is best for them.
“In good conscience, as educators dedicated to the learning of our students and the welfare of our school communities, we are not administering this test.”
Fred Klonsky, in a blog picked up by ReclaimReform.com, an education reform website, photographed the teachers, one of which was his daughter, at Thursday’s protest.
“This morning teachers and staff at the International High School at Prospect Heights are rebelling against the wrong that standardized testing has become,” Fred Klonsky wrote. “Each staff member – teachers, psychologists and paraprofessionals – has signed on to a letter to the new New York City Schools Chancellor, Carmen Fariña.
“Among the dedicated teachers whose name is on the letter printed below is my daughter Jessica Klonsky. She is a teacher at this wonderful Brooklyn high school serving the community’s immigrant students. She is a veteran of more than a dozen years.”
This latest salvo in the battle against Common Core testing in New York is likely to echo loudly in states like Georgia, Alabama, California, New Jersey and Colorado, all of which have their own nascent “opt out” movements.
But this is the first time a group of teachers have taken such a bold move against Common Core in New York, which is considered a national leader in the opt-out movement. The NYC teachers sent the letter to Schools Chancellor Carmen Fariña urging her to drop the test for the city’s immigrant students still learning English.
The letter said the New York ELA Performance Exam was made “without any thought to the 14 percent of New York City students for whom English is not their first language.”

Email ThisBlogThis!Share to TwitterShare to FacebookShare to Pinterest
Labels: opt out, test refusal