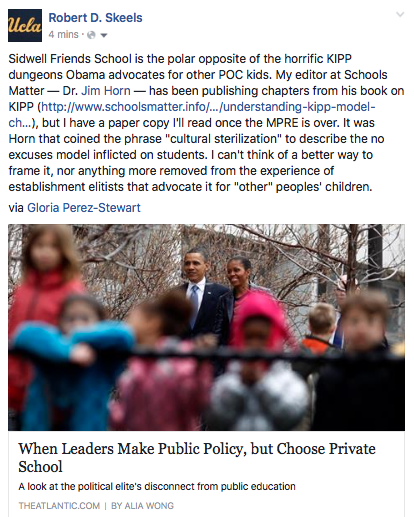 The Atlantic has a surprisingly candid piece entitled “A Public-School Paradox” about the hypocrisy of the establishment elite in Washington not sending their own offspring to public schools. This has been exacerbated by the fact that the most vociferous neoliberal corporate education reform proponents — like Barack Obama, Arne Duncan, and Hillary Rodham Clinton — are all private school parents. Disconnected and disinvested from the public commons, they advocate for horrific, racist, classist “reforms” that only serve to widen the gap between working class families and themselves. Especially disturbing is this trio of Democratic politicians’ full-throated support of the white supremacist Common Core State Standards (CCSS), a curriculum from which their own scion were spared. This is equally true, if not more so, for reactionary, right-wing troglodytes like Donald J. Trump, whose, as The Atlantic piece points out: “five children all attend(ed) private schools”. It’s almost a given that George W. Bush, whose contempt of public schools was apparent in his support of segregationist charter schools and imposing NCLB on a hapless nation, would have sent his scion to private schools while president, had they been that age.

My brief comments in reaction to the piece follow.

Sidwell Friends School is the polar opposite of the horrific KIPP dungeons Obama advocates for other POC kids. My editor at Schools Matter — Dr. Jim Horn — has been publishing chapters from his book on KIPP, but I have a paper copy I’ll read once the MPRE is over. It was Horn that coined the phrase “cultural sterilization” to describe the no excuses model inflicted on students. I can’t think of a better way to frame it, nor anything more removed from the experience of establishment elitists that advocate it for “other” peoples’ children.