Those who are predicting the coming demise of high-stakes testing should be extremely concerned that the potential replacement of standardized tests, which are awful enough and have been used to demonize and sort underprivileged students for over a hundred years, may bring more ominous kinds of assessments that are ongoing, unending, and much more intrusive and damaging.  The new assessments will happening every day, rather than once a year, and they are intended to amass tons of data on individual students that may be used for human profiling and more effective societal placement far down the road after students leave school.
Parents and teachers, alike, should be particularly alert for what is labeled "personalized learning" initiatives, sometimes referred to as "competency based" or "proficiency-based," which really represent the most alienating and depersonalized kinds of computerized instructional tutoring, the kind that collects, collates, and stores academic, social-emotional, and other personal data on children.
Based on the ostensible goal of individualizing instruction, computer software loaded onto laptops can now monitor every click that children make on these computers and offer up custom problems based on past performance and individual preferences. Sounds great, doesn't it?
It could be, I guess, if these "smart" tutors knew that children have figured out that they can get easier assignments from their virtual teachers by pretending to be stupid.  The ever-present data nets on these computers are, nonetheless, storing massive amounts student data that may be shared across platforms and stored on commercial servers.
Some of the economic efficiency zealots who see public schools as a waste of money have even come to view this kind of intrusive computerization as the cheapest way to teacher proof education and to replace expensive brick and mortar schools. Other elite paternalists see the corporate potential to track students from pre-K to adulthood, thus producing individual dossiers or digital dashboards that may be used to determine fitness for further educational opportunities or careers.
Accompanying the new frenzy to digitize learning, there is new impetus among elite paternalist social engineers, both in and out of corporate government offices, to introduce more social-emotional learning and assessment and to gather "social-emotional learning" (SEL) data, which may form individual profiles that include psychological, political, sexual, or moral (values) data that was/is gathered without a student even knowing about it.
But aren't childen's or adult's private data protected by the federal government, you may ask. Well, they once were, but that was changed with Gates and his pals got Team Obama to water down FERPA regulations to make corporate tech exploitation of children possible.

This change opened the floodgates of cash to set up new databases for the collection of massive amounts of student data.  Gates, alone, sunk $100 million during the next two years in one effort.  Gates hired inBloom, Inc. to run it.  Fortunately, monitoring by activists, the ACLU, and outrage by parents brought this effort down in 2014.  The NYTimes posted this still from an inBloom video that presented this possibility for using data: 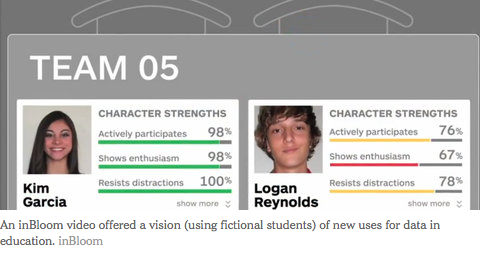 So you see this kind of dystopian capitalism can be countered, as it was with the shutdown of inBloom.  But, and it's a big but, Gates and others are back with a new corporate incentive package known as ESSA, which has the support, too, from the Clinton Global Initiative and soon-to-be President Hillary Clinton, to spread the same bad plans into schools around the nation.
Part 2 will look an example or two.
at 8:53 PM