I saw your new blog post yesterday that shows your earnestness to depict me as an out-of-control sexist bully who is out to get you:


Jim Horn has a website called “Schools Matter.” He opposes corporate reform, as I do.
I have never met him. I hear he doesn’t like me. I don’t know why. I thought we were fighting for the same goals.

The first time I became aware of his hostility was when he posted a photograph of me with the caption, “Nice face job, Diane.” Very puzzling as I have never had a facelift. Sexist too. I ignored him.

When Anthony Cody and I decided to create the Network for Public Education, aiming to build alliances among the many individuals and groups fighting against corporate reform, we selected a board and announced our existence. Horn emailed to say that he was going to attack us because we included a much admired NBCT African American teacher from Mississippi. Horn discovered that she had written an article praising merit pay. Many emails went back and forth among him, Anthony, and me. He decided not to poison us at our birth.

But he has an intense and personal animus towards me. Again, I can’t explain it. I don’t know why. . . .


Diane, Diane, you surprise me with your amateurish dissembling.  I have seen much better from you over the years.
Surely you remember crowing about a review that I did of your book in 2013.  Yes?  No, well here's the link.

Do you not remember, Diane, the email exchange we had after I came to hear you speak (twice in one day) at William & Mary in October 2010?  Surely you remember those emails the following January, especially the email wherein you joked about that earlier blog post that I did that  included this parenthetical "(nice facelift, Diane)." 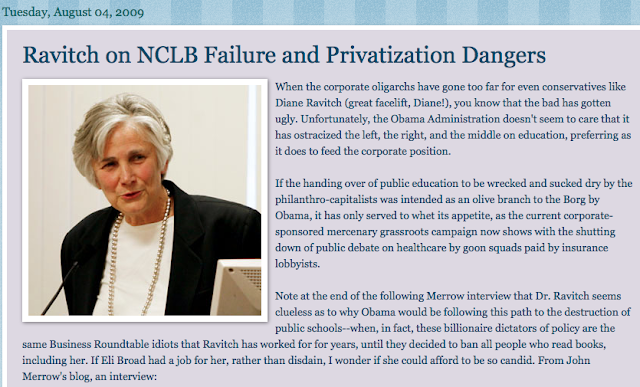 It was the same email exchange that included my apology for any offense I might have caused you.  Let me jog your memory.  And if you would like to see screen shots of the original emails, I have those, too.