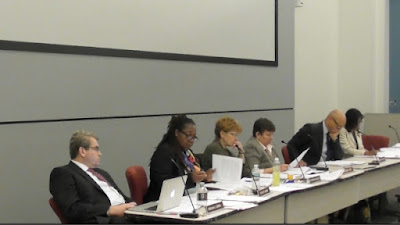 Each month the Alliance for Philadelphia Public Schools does an analysis of resolutions before the Philadelphia School Reform Commission monthly meeting. While this is a local issue, the behind the scenes stealth assault on the Philadelphia public schools is stark in this week's meeting of the SRC. The players are different, but the same methods are being used in the school districts of low-come communities across the country. Be sure to read the APPS analysis after each resolution.

The unexpected resignations of Commissioners Marjorie Neff and Feather Houston raise many questions about the future of the SRC. Who will replace them and how will they be chosen? Since the state takeover the the Philadelphia School District in 2001, the selection process has always taken place out of the public eye. There is no formal set of qualifications for the position. SRC members may receive no salary, but we cannot forget that they are government officials overseeing a $2.6 billion budget. No Philadelphian has ever attended a nomination hearing for any member, past or present, of the SRC. The mayor has final say on his nominee; there is no review process. The governor’s nominee must pass Senate approval, but those have never been open hearings.  Mayor Kenney is now “vetting potential candidates”. For those of us deeply concerned about the governance of the district, these are not reassuring words. They mean that once again, the people of the city will have nothing to say about who determines the future of our schools and communities.

The SRC must maintain a quorum of three. Farah Jimenez, in the view of many, doesn’t count as a full voting member since she has so many conflicts that result in abstentions on crucial votes. How will this affect the again resubmitted charter renewal resolutions which have been postponed for six months?

The assault on public schools continues with increased intensity. Instead of cultivating a high-quality district that serves every student in every neighborhood, the Hite administration’s policy is to parcel funds to privatize schools and cripple communities. Instead of ensuring that every school has a full teaching staff along with full-time nurses, counselors, and librarians, Hite creates the illusion of improvement with diversions like the Redesign Schools, Turnaround Schools, the Innovation Network, the Turnaround Network, and the Autonomy Network.

Among the October resolutions is one to reopen a high school shut down by the SRC in 2013 as something other than a real public school (B-10) and one to relocate another high school. How will these changes affect enrollment in nearby schools? Is this a foreshadowing of more deprivation of neighborhood schools in order to fund “contract” schools and additional charters? The “cash-strapped” school district has somehow come up with $23 million for the Big Picture company; last month they voted to have Big Picture reopen Vaux as a contract school. Yet they fail to address community concerns about neighboring Strawberry Mansion High—like will Big Picture be poaching SMHS students? Is this the first step towards closing Strawberry Mansion as part of the Philadelphia Housing Authority's "revitalization" (gentrification) plan for the neighborhood? Will the SRC finally explain what a contract school is? Will they tell us what Big Picture will be doing with $23 million in taxpayer funds?

What if the district used that $23 million to bring back Reading Specialists in every school? Reading specialists have vanished, along with other support staff, as Hite’s “Doomsday Budget” has become the new normal. While giving lip service to being “for the children”, every year there are fewer resources for them. Will a new SRC reverse this devastating trend and ensure that every school in every neighborhood has what it needs?

Resolutions of Note
Be sure to read the APPS analysis with each resolution.

Click here to read the Resolutions and the APPS analysis.