Here is a clip from the slick website for the Christian Boot Camp (CBC) operated by Commandant Flowers's Love Demonstrated Ministries International (LDMI):

Commandant Charles Flowers and his wife Janice are the founders and directors of Love Demonssrated [sic] Ministries, International (LDMI). Christian Boot Camp (CBC) operates under the oversight of LDMI.

CBC was intended originally for boys only. However in the summer of 1996 while Commandant Flowers was rejoicing over the success that CBC was having with the young men,the Lord spoke to his heart about young ladies. He was convinced that they needed to begin to train young ladies also and in the summer of 1997 they began training both male and female flights.

Flights? You see, the preparation for Mr. Reverend Commandant Flowers's pedagogical over-exuberance was as an Air Force drill instructor, even though Air Force drill instructors are not trained to drag their troops behind Humvees. Now the Commandant commands a company of Christan soldiers at the Faith Outreach Center International, and he has his own staff of Christian captains that he is training to help him "handle the leadership over the people."

The Commandant/Reverend is certainly busy enough to need a few captains to keep his enterprises up and running. His website has a "Shopping Cart and Donations" page, a "Mission Mall," where visitors are urged to "shop and help build God's kingdom through missions," a "Cyber School," and other intriguing links. And even without his various enterprises, the Reverend/Commandant has received government and private grants worth almost $300,000 a year in saintly salary. 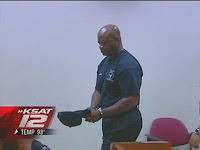 Here's the story from the Houston Chronicle:

A San Antonio pastor and an employee of his Christian boot camp were arrested Friday on aggravated assault charges, accused of dragging a girl behind a van after she failed to keep up during a running exercise.

Flowers and Bassitt each were being held on $100,000 bail at the Nueces County Jail in Corpus Christi.

Authorities said both Flowers and Bassitt restrained the girl June 12, tying her to the back of a van with a piece of rope before dragging her on her stomach at the Love Demonstrated Ministries' boot camp in Banquete, about 10 miles west of Corpus Christi.

Schertz police assisted Nueces County authorities in the arrests because the camp's orientation sessions are held in Schertz, and the 15-year-old girl claimed she was assaulted there, too.

Bailey said the second assault claim was turned over to the Comal County district attorney's office, which hasn't said if any criminal charges will result.

He said the assault described as having occurred in Schertz isn't as severe as the dragging claim out of Nueces County.

"Obviously force was used, but the big question is whether or not it exceeded the force permitted by the parents," Bailey said, adding camp officials said they had permission slips from parents that allowed them to discipline their children.

Flowers declined to comment on the allegations Friday, evading reporters outside the offices of the Faith Outreach Center.

Authorities interviewed on Friday could not say how far the teenager was allegedly dragged. Her mother complained to authorities after boot camp personnel took her daughter to get treated for scrapes and bruises on her stomach, legs and arms.

Flowers, a retired U.S. Air Force instructor, holds the title of commandant of the boot camp he has operated with his wife, Janice, since the mid-1990s, states the camp's Web site.

The camp was created to "reinstill the values that have been lost in our society for a couple of generations, values such as discipline, morality, unity and integrity."

Associate pastors at the Faith Outreach Center couldn't be reached for comment Friday.

Patrick Crimmins, a spokesman for the Texas Department of Family and Protective Services, said it "appeared that this operation is probably exempt from our regulation."

He said for a camp to be licensed, it needed to operate longer than 11 weeks.

The camp in Nueces County only lasts 32 days.