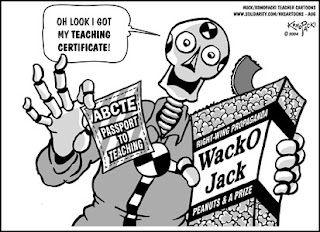 Part of neglected NCLB story that goes unreported is the bogus rhetoric on "highly-qualified teachers" that masks a concerted effort to weaken the teaching profession by credentialing unprepared and under-educated teacher candidates. Short of blowing up colleges of education, which is the preferred solution by Bush's crackpot reading czar and co-conspirator in the Reading First corruption scandal, Reid Lyon, the Bush Administration has done all it can to undercut teacher education programs and the progressive educational philosophies that are a part of those programs.

Preferring no preparation to preparation programs polluted by the dangers of Deweyan democracy, the wingnuts in charge at ED have heavily backed various scams labeled "alternative route" certification, which range in ridiculousness from 8-week cram programs to certification via Internet testing. Finally, Spellings, Paige and Co. are being taken to task in the courts. From the CBS affiliate in San Francisco:

(BCN) SAN FRANCISCO A coalition of activist groups and parents filed a federal lawsuit in San Francisco Tuesday against the U.S. Department of Education and Secretary of Education Margaret Spellings charging that the department has violated the No Child Left Behind Act by certifying under qualified teachers as being "highly qualified."

The act, signed by President George W. Bush in 2002, requires that only teachers who have a full state credential be considered "highly qualified."

However, the department has issued regulations that allow states to label any teacher currently participating in an alternative credential program while teaching as "highly qualified," according to the plaintiffs.

The lawsuit argues that the department is violating the law, deceiving parents and harming the educational development of children by labeling beginning and intern teachers as "highly qualified."

"Providing all students with highly qualified teachers is the only way to ensure that no child is left behind. Defining teachers in training as 'highly qualified' violates both the letter and spirit of the law, primarily to the detriment of low income students of color," according to plaintiffs' attorney Jenny Pearlman of the law firm Public Advocates Inc.

Lorie Chinn, a board member of the activist group California ACORN, one of the lawsuit's plaintiffs, said that schools teaching poor and minority children have a disproportionate share of these intern teachers and because of the DOE regulation the schools' parents often do not even realize it.

"Parents deserve to know when their children's teacher is an intern," Chinn said.

The lawsuit seeks to have the DOE regulation ruled illegal and the definition of a "highly qualified teacher" that is in the NCLB Act be used instead.

"If we prevail, the suit will have ripple effects throughout the implementation of NCLB nationally," Public Advocates staff attorney Tara Kini said. "States and school districts will no longer be permitted to concentrate teachers in training in schools serving high numbers of students of color, and they will be required to report accurately the numbers of 'highly qualified' teachers so that real plans can be made to get better trained and qualified teachers to all students."

According to Public Advocates, more than 10,000 intern teachers are labeled as "highly qualified" each year in California. Nationally the number is more than 100,000.

In addition to California ACORN the other plaintiffs in the lawsuit include the activist group Californians for Justice as well as a number of individual students and parents. The suit was filed in U.S. District Court in San Francisco.