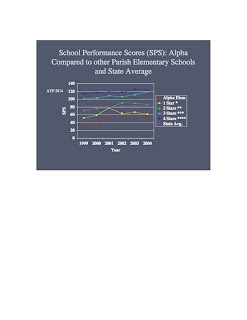 I received a comment this morning from Paul Pastorek, State Schools Superintendent of Louisiana. He was responding to a post yesterday that included Bill Quigley's report on the charterizing of New Orleans Schools.

I include below Mr. Pastorek's letter, and I hope he will forgive me for responding within the text of his letter. I want to first commend Mr. Pastorek for finally owning the agenda that has driven school reform in Louisiana ever since 1999, when the LEAP came on the scene under the disingenuous guise of helping minority children and closing the achievement gap.

The single chart above (click it to enlarge) undeniably shows how school performance scores in Louisiana continue to be reflections of family and school income--and how the the closing of the achievement gap remains a rhetorical flourish not base in reality. No education reform alone is going to change that, including Mr. Pastorek's reckless new plan to create a statewide charter system before the uproven one in New Orleans is even tried. But I am glad to see, nonetheless, Mr. Pastorek finally and openly admitting the State mission to bury the public schools, not to fix them. His predecessors have not been so candid.

When I became the State Superintendent of Education 4 months ago, I did so because of my displeasure with the direction of the Recovery School District (the state takeover schools). I have heard the criticisms that Bill Quigley have [sic] raised from people too numerous to count. While I agree with much of what is contained in the article, I don't agree with it all. Suffice to say, that I am determined to use charters effectively for children, to rectify the perception and the reality of a two tiered system.

When I spoke to the Baton Rouge Rotary, I spoke to citizens whose system in East Baton Rouge Parish is nearly uniformly comparable to the lower tier in New Orleans. I want to eradicate that. I believe that a healthy combination of community supported charter schools can fulfill that purpose and spur the independent public schools on to excellence.

In one of your schools that I have been following since 2000, the committed and professional staff has done everything humanly possible to raise test scores, including the adoption of direct instruction and a laser focus on the test between September and March. They have changed their pedagogy and their curriculum, and they have done parental outreach, professional development, collaborative teaching, the pep rallies, central office experts, and prayers.

The one thing the committed educators at Alpha cannot change is the grinding poverty that is the way of life in their school district, nor can they cannot change the effects that poverty has on their fourth graders who have been ground up in your draconian State testing system that ignores their plight while it punishing them with repeated grade retentions and abusive methods. Nor can these educators do anything about the loss of Title I money that they must sacrifice from their threadbare school funds to pay for NCLB sanctions such as transporting students to other schools and paying tutoring company temps to hand out worksheets to exhausted and demoralized children.

New Orleans IS an experiment. If executed well, I believe that we will be successful. Paul Vallas is a very talented school administrator and I believe he is poised to do great things for both "tiers".

East Baton Rouge (and many districts) continue to do the same thing expecting to get a different result. We will experiment, knowing that we will and that it will be better than what we had before.

Yes, you will experiment with no evidence to show that what you are trying to implement is more effective than what you have now. In fact, the evidence we do have suggests that charters are less effective than the public schools they would replace. But that does not stop you from garnering financial support from the U. S. Department of Education, which, otherwise, demands scientically-based research when it is in the interest of force-feeding their sanctioned abusive chain gang literacy methods force fed to poor children.

Yes, I am sure the security situation will be changed. More guards in the schools and more and more behavioral control, which is the best preparation for the likely destination for so many of these kids within the booming incarceration industry of Louisiana.

Yes, indeed, time will tell. While we wait, Mr. Pastorek, you might have look at this report based on the educational genocide in Louisiana that you now supervise. Sleep well.