"Luck is his companion, Gamblin' is his game" 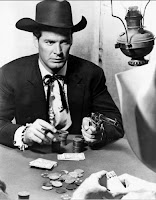 We must wonder what part of the meaning of "maverick" can be applied to John McCain's cloning of Bush's education privatization policy. Being mavericky most certainly has nothing to do with independent judgment or dissenting opinion that would cut him loose from his more evil twin, W., even though McCain has dropped the threadbare veil of pretense that the Bushies hung in front of their eight years of machinations aimed to crush the public schools, teacher preparation, and the teaching profession.

Perhaps by "Maverick" he means a kind of rollicking riverboat gambling with children's education and, thus, America's future, in much the same way that McCain and Bush would bet America's retirement on a marked deck dealt by the unregulated sharks of Wall Street.

Here is a clip from Bruce Fuller's take on the Bush, er, McCain education platform from today's NYTimes:

John McCain’s fusion to President Bush’s ideological hip couldn’t be tighter when it comes to education. He is eager to expand taxpayer financed vouchers to aid parents who send their children to parochial schools, to “shake up schools with competition,” as he said Thursday night in his acceptance speech. And he aims to further centralize elements of President Bush’s No Child Left Behind initiative, rather than rethinking how Congress can narrow achievement gaps without micromanaging the daily work of teachers.

According to a recent Gallup poll, just two in five Americans support school vouchers. On No Child Left Behind, four in five believe they should be revamped by Congress, to de-emphasize standardized tests. Mr. McCain’s speech alleged that Mr. Obama wants schools answerable to “entrenched bureaucrats,” rather than to parents, yet it’s the Republican candidate who still supports Washington’s maze of rules under the No Child Left Behind legislation.

Mr. McCain’s push to privatize schooling also surfaces in his pitch to have Washington pick after-school tutoring companies, removing this authority from local school boards. These budding corporations, sniffing out a vast new market, see better prospects if they can directly lobby federal officials, not unlike the inside politics of winning farm subsidies.

On early education, Republican leaders have been silent, even though quality preschools pack a strong punch in boosting young children’s learning. Mr. McCain has repeatedly voted against bipartisan proposals to expand and improve Head Start preschools.