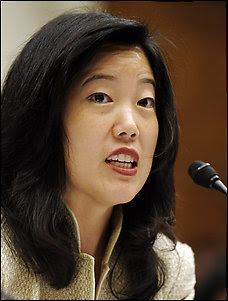 Photo by Susan Walsh-AP
Michelle Rhee has a big bonus for DC teachers who choose the greenbacks of her Green Tier, those teachers who are willing to, 1) give up tenure, 2) spend a year on probation, and 3) trust Michelle Rhee to re-hire them following that probationary year with or without their big bonuses intact.

On the other hand, stubborn red bird teachers who insist on preserving what remains of the due process and academic freedom guarantees that are still offered to the tenured, must wear the scarlet R of the red tier, a clear acknowledgment of their unwillingness to be judged on their true merits (as defined by test scores in databases controlled by Michelle Rhee.)

The younger green birds, many of them like the TFA (Teach for Awhile) contingent, are temporarily padding their resumes with the generosity of their good works while making plans for grander futures. For these ambitious folks who wouldn't be caught dead committing themselves to a dead end career like teaching, they would really like to have those big bonuses to pay for law school or to get their MBAs. It all makes for a perfect divide and conquer strategy that Rhee hopes to exploit for its full potential to gut the teaching profession.

. . . .Teachers who attended the session, which was not open to the media, seemed to remain split on the merits of Rhee's proposal and whether it should come to a vote. Several said the two-tiered system was Rhee's attempt to drive a wedge into the union.

"The red-green salary proposal is designed to divide teachers into two opposing camps," longtime Woodrow Wilson High School history teacher Erich Martel wrote in a flier he distributed. Those choosing green, he said, "surrender tenure in exchange for trusting the objectivity and fairness of the principal and chancellor." Instructors who opt for red will have chosen "the scarlet letter" and "will be stigmatized for not being on the principal's -- and chancellor's -- team."

Other teachers, especially younger ones less concerned about tenure, expressed disappointment that their chance at higher salaries linked to performance might be slipping away.

Some union activists accused Parker of misrepresenting Rhee's plan by downplaying the level of risk that teachers would assume under the new salary framework. Several said that Parker was repeatedly asked why it was necessary to split teachers into two groups but that he never answered the question.

"All they got tonight was bamboozled and confused," said General Vice President Nathan Saunders, who announced the formation of a new teachers group, Committee for Fair Reform in D.C. Public Schools, to oppose Rhee's plan and other personnel decisions she has made as chancellor.

The committee is sponsoring a prayer service for "social justice in the workplace" Friday evening at Covenant Baptist Church in Southwest Washington.