The Negative Truth about Positive Psychology

Chris Hedges has a nice intro to the corporate culture brainwashing technique mastered by CIA consultant, Dr. Martin Seligman. As I have noted elsewhere, this is the same intervention adopted by Feinberg and Levin for the children of the poor in KIPP, Inc. schools, where children are trained to ignore their poverty through a double whammy application of learned helplessness followed by unending doses of learned optimism. And it is no coincidence that the philanthro-capitalists are lined up in support of this new psychological and cultural reform masked as education reform. The new eugenics has arrived at the same time that the funding piece has been put in place to make sure that the poor receive the treatments they require in the segregated, corporate-run charter schools that our President is so keen on. 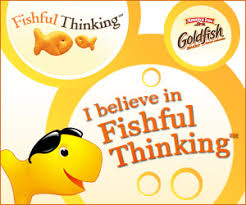 There is even a middle class child version of this corporate cultism sponsored by Pepperidge Farms called "Fishful Thinking." Get it? So while encouraging more consumption of these tasty morsels of grease and salt, moms can learn how to continue the mind control techniques on their unsuspecting children at home. If they are lucky, these children will be so optimistic by the time they are adults, they will never notice that the world is burning up around them.

From the Hedges piece, published originally at Truth.dig but clipped here from Common Dreams:

. . . . The driving ideology of corporate culture is a blind faith in the power and virtue of the corporate collective. All quotas can be met. All things are possible. Profits can always be raised. It is only a question of the right attitude. The highest form of personal happiness, we are told, is when the corporation thrives. Corporate retreats are built around this idea of merging the self with the corporate collective. They often have the feel of a religious revival. They are designed to whip up emotions. Office managers and sales staffs are given inspirational talks by sports stars, retired military commanders, billionaires and self-help specialists like Tony Robbins who tell them, in essence, the impossible is always possible. And when this proves not to be true it is we who are the problem. We simply have to try harder.

The belief that by thinking about things, by visualizing them, by wanting them, we can make them happen is magical thinking. The purpose, structure and goals of the corporation can never be questioned. To question, to engage in criticism of the corporate collective, is to be obstructive and negative. We can always make more money, meet new quotas and advance our career if we have enough faith. This magical thinking is largely responsible for our economic collapse since any Cassandra who saw it coming was dismissed as "negative." This childish belief discredits legitimate concerns and anxieties. It exacerbates despair and passivity. It fosters a state of self-delusion. And it has perverted the way we think about the nation and ourselves.

Corporate employees, like everyone else, are gripped by personal dilemmas, anxieties and troubles. They are not permitted, however, to ask whether the problem is the corporate structure and the corporate state. If they are not happy there is, they are told, something wrong with them. Real debate, real clashes of opinion, are, in the happy world of corporatism, forbidden. They are considered rude. The corporations enforce a relentless optimism that curtails honest appraisal of reality and preserves hierarchical forms of organization under the guise of "participation." Corporate culture provides, as Christopher Lasch pointed out, a society dominated by corporate elites with an anti-elitist ideology.

Positive psychology, which claims to be able to engineer happiness and provides the psychological tools for enforcing corporate conformity, is to the corporate state what eugenics was to the Nazis. Positive psychology is a quack science that throws a smoke screen over corporate domination, abuse and greed. Those academics who preach it are awash in corporate grants. They are invited to corporate retreats to assure corporate employees that they can find happiness by sublimating their selves into corporate culture. They hold academic conferences. They publish a Journal of Happiness Studies and a World Database of Happiness. There are more than a hundred courses on positive psychology available on college campuses. The University of Pennsylvania offers a master of applied positive psychology program chaired by Martin Seligman, considered the father of the discipline, and author of "Authentic Happiness: Using the New Positive Psychology to Realize Your Potential for Lasting Fulfillment." The School of Behavioral and Organizational Sciences at Claremont Graduate University offers a Ph.D. and M.A. concentrations on what it calls "the Science of Positive Psychology." Degree programs are also available at the University of East London and in Milan and Mexico City.

Dr. Tal D. Ben-Shahar, who wrote "Happier: Learn the Secrets to Daily Joy and Lasting Fulfillment," taught hugely popular courses at Harvard University titled "Positive Psychology" and "The Psychology of Leadership." He called himself, when he taught at Harvard, the "Harvard Happiness Professor."

"There is mounting evidence in the psychological literature showing that focusing on cultivating strengths, optimism, gratitude, and a positive perspective can lead to growth during difficult times," Ben-Shahar has stated.

Positive psychology therapy instructs patients to write a letter of gratitude to someone who has been kind to them. Patients pen little essays called "You at your best" in which they are asked "to write about a time when they were at their best and then to reflect on personal strengths displayed in the story." They are instructed to "review the story once every day for a week and to reflect on the strengths they had identified." And the professionals argue that their research shows that many of their patients have "lastingly increased happiness and decreased depressive symptoms."

Ben-Shahar pumps out the catchy slogans and clichés that color all self-improvement schemes. ‘‘Learn to fail or fail to learn," he says, and ‘‘not ‘it happened for the best,' but ‘how can I make the best of what happened?' "

He argues that if a traumatic episode can result in post-traumatic stress disorder it may be possible to create the opposite phenomenon with a single glorious, ecstatic experience. This could, he says, dramatically change a person's life for the better.

Those who fail to exhibit positive attitudes, no matter the external reality, are seen as maladjusted and in need of assistance. Their attitudes need correction. Once we adopt an upbeat vision of reality, positive things will happen. This belief encourages us to flee from reality when reality does not elicit positive feelings. These specialists in "happiness" have formulated something they call the "Law of Attraction." It argues that we attract those things in life, whether it is money, relationships or employment, which we focus on. Suddenly, abused and battered wives or children, the unemployed, the depressed and mentally ill, the illiterate, the lonely, those grieving for lost loved ones, those crushed by poverty, the terminally ill, those fighting with addictions, those suffering from trauma, those trapped in menial and poorly paid jobs, those whose homes are in foreclosure or who are filing for bankruptcy because they cannot pay their medical bills, are to blame for their negativity. The ideology justifies the cruelty of unfettered capitalism, shifting the blame from the power elite to those they oppress. And many of us have internalized this pernicious message, which in times of difficulty leads to personal despair, passivity and disillusionment.

This flight into the collective self-delusion of corporate ideology, especially as we undergo financial collapse and the pillaging of the U.S. treasury by corporations, is no more helpful in solving our problems than alchemy. But there are university departments and reams of pseudoscientific scholarship to give an academic patina to the fantasy of happiness and success through positive thinking. The message that we can have everything we want if we dig deep enough inside ourselves, if we truly believe we are exceptional, is pumped out daily over the airwaves in advertisements, through the plot and story lines of television programs and films, and bolstered by the sickeningly cheerful and upbeat banter of well-groomed television hosts. This is the twisted ideological lens through which we view the world.

"From my two years at the company: positive psychology is a euphemism for spin," Vasquez went on. "They try to spin their employees so much they can't tell right from left, and in the process they forget they do the work of three people, have no health insurance, and three-quarters of their paycheck goes to rent."

This ideology condemns all social critics, iconoclasts, dissidents and individualists, for failing to seek fulfillment in the collective chant of the corporate herd. It strangles creativity and moral autonomy. It is about being molded and shaped into a compliant and repressed collective. It is not, at its core, about happiness. It is about conformity, a conformity that all totalitarian and authoritarian structures seek to impose on the crowd. Its unrealistic promise of happiness, in fact, probably produces more internal anxiety and feelings of inadequacy than genuine happiness. The nagging undercurrents of alienation, the constant pressure to exhibit a false enthusiasm and buoyancy, the loneliness of a work life in which one must always be about upbeat presentation, the awful feeling that being positive may not in fact work if one is laid off, are buried and suppressed.

There are no gross injustices, no abuses to question, no economic systems to challenge in the land of happy thoughts. In the land of happy thoughts we are to blame if things go wrong. The corporate state, we are assured, is beneficent and good. It will make us happy and comfortable and prosperous even as it funnels billions of taxpayer dollars into its bank accounts. Mao and Stalin used the same language of harmony and strength through the collective, the same love of spectacles and slogans, the same coercive power of groups and state propaganda, to enslave and impoverish millions of their citizens. And, if we do not free ourselves from the grip of this ideology and the corporate vampires who disseminate it, this is what will happen to us.