Final Act of Small-Minded Bitterness by Wake's Gang of Five 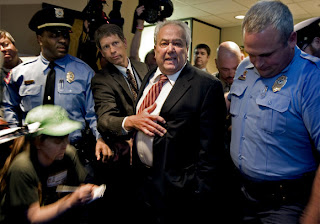 After Wake County voters re-established sanity last month by voting out the resegregationist school board majority, the Gang of 5 met one last time behind closed doors to rescind a previous offer to mediate trespassing cases against citizens who publicly resisted the end to the socioeconomic diversity program earlier this year.

If there could conceived be a more appropriate goodbye by these hateful bigots, I can't think of one:

The Wake County school board lineup that left office Tuesday decided behind closed doors last week to seek trials for 30 people charged with trespassing at board meetings, rejecting a prosecution offer to have the cases mediated. Former board chairman Ron Margiotta said the board wanted to take a stand against "anarchy."

But Wake County District Attorney Colon Willoughby said Wednesday that his office will make the ultimate decision and that he still hopes the cases can be settled rather than tie up court dockets.