Lisa G. Keegan has come a long way since her feature in the Peoria Times in 2006, which followed many months of avoiding questions emanating from a federal audit that noted the missing millions that someone raked away while she was running the Education Leaders Council during the champagne popping days for the ed industry under Bush II.

Keegan served as McCain's mouthpiece on education 4 years ago, and this time around she has hooked up with someone whose corruption credentials make her look like a paragon of virtue.  Hey, everybody's doing it!

When Gingrich loses, will Keegan leverage her new visibility into a job in the post-partisan corporatist ED?  Maybe the new Secretary of Education?, since Party labels are meaningless in the brave new corporate ed world of pushing the same old bullshit to benefit the same 1%ers. 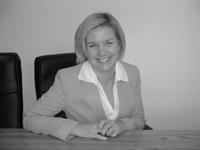 In a NOW segment aired March 26, 2004 that introduced the Bush cronies who had just been handed $77,000,000 in ED funds to seed school privatization ventures, Lisa Graham Keegan, head of the Education Leaders Council, gushed to reporter, Michelle Mitchell:


This admission came even as Mitchell was reporting that an audit had showed that the $16,000,000 that ELC had squeezed from ED (with the help of former ELC chief, Gene Hickok) was going to pay big salaries that Lisa and her friends were doling out to one another.

It wasn't long after that, however, until Keegan took her cut and split, leaving a big mystery as to what happened to the other millions that ELC had received for the impressive-sounding programs pumped on ELC's spiffy website, before it went black last year.

Now it seems Keegan is back, this time looking for more federal infusion for her version of virtual education. On the website for her company, e2020, Inc., it appears that e2020 is a form of on-demand teacher in a box, marketed heavily to urban areas where high schoolers find it too dangerous to go to school. One might think of e2020 as the Iraqi model for education: keep the students and the teacher in their virtual green zones, where they are free to learn all they desire to know. 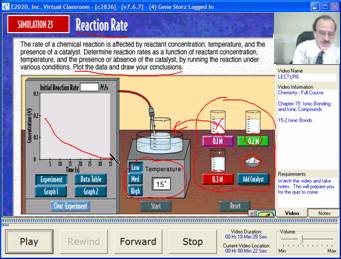 One can expect, too, that there will lots of federal dollars to fund this new kind of powerful school choice--and, of course, to close the achievement gap. You know.

You can read about Lisa's new adventures in today's Peoria Times.
at 9:02 AM