When former Teach for America executive, Kevin Huffman, was named Tennessee's Education Commissioner earlier this year, it was a sure sign that TFA had moved into a key position in implementing a third decade of the same corporate education reform that has produced so little learning at such great costs, both human and economic, since the 1980s.

Last week Huffman named two new lieutenants in his and the Business Roundtable's latest efforts to do for education what they have done for business: make themselves fat while destroying the system.  Named as an assistant commissioner of career and technical education was Danielle Mezera, who served as corporate education adviser to Mayor Karl Dean, as the Nashville mayor suffered repeated attacks of "outsourcing envy" as he had Mezera study the sweet financial deal that Memphis had sold their souls to land from the Gates Foundation.

Mezera is quoted in a piece from Scholastic Adminstrator in 2008 entitled "The Outsourced District," which examines the arrival in Nashville of the new movement to turn schools and school services into corporate revenue streams (my bolds):


. . . slowly but surely the possibility of hiring outside organizations mutated from a far-out notion to an idea under consideration. This is partly because it was creeping into the community and taking root. One kipp school, delayed due to Tennessee’s restrictive charter law, finally opened its doors in 2005. A Big Picture School started a year after that.

. . . . The process has accelerated in the last year with the arrival of a new mayor, Karl Dean, who is intent not only on expanding Purcell’s education legacy, but forging his own. His attention to the issue may be fueled to a certain extent by a bit of old-school rivalry: Memphis, a long-time rival of the district, is bringing in outside organizations—and successfully. Call it outsourcing envy, but Dean wants what Memphis has.  The push for outside help came in large part from a 2007 visit by the mayor and his team to Memphis.

“We went to Memphis because we had heard all these great things,” says aide Mezera, who advises Dean on education. “The mayor looked at me and asked, ‘Do we have that in Nashville?’” After going through the laundry list of programs, the answer, uniformly, was no.  In a major speech this spring, Mayor Dean made a very public case for why Nashville needed outside help—TFA, in particular. . . . .

The other corporatist added to Huffman's TN government payroll for the benefit of corporations is Kathleen Airhart, who worked for Putnam County Schools before, during, and after a very lucrative 2-year stint with McGraw-Hill's SRA Direct Instruction division during the Reading First heyday that soon became swamped by a tsunami of corruption.  Airhart will serve Huffman as the department of education’s new deputy commissioner.

Airhart was apparently able to leverage her years of influence as Supervisor of Special Education in Putnam County  to become an account rep for McGraw-Hill from 2005-2007, even as she remained an employee of Putnam County Schools.  This is from LinkedIn:


Putnam County is an innovative system located in middle TN with 11,000 students and 20 schools.

Airhart even managed to complete a dissertation during her time as a special ed supervisor/McGraw-Hill rep.  And yes, the study explored reading test score gains on the same product line that she was selling.  In fact, after she became Director of Putnam County Schools, she provided McGraw-Hill with glowing and seemingly outrageous claims about the scripted parrot learning system that she had previously hawked while writing her dissertation.  These clips below (click to enlarge) are from a sales document, Corrective Reading, that McGraw-Hill published on the Web dated 2008. 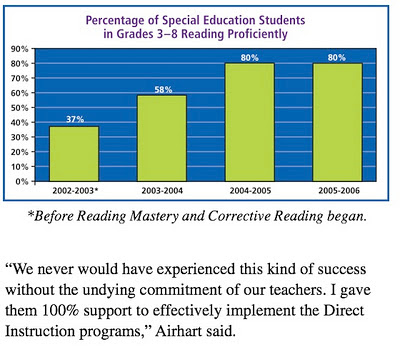 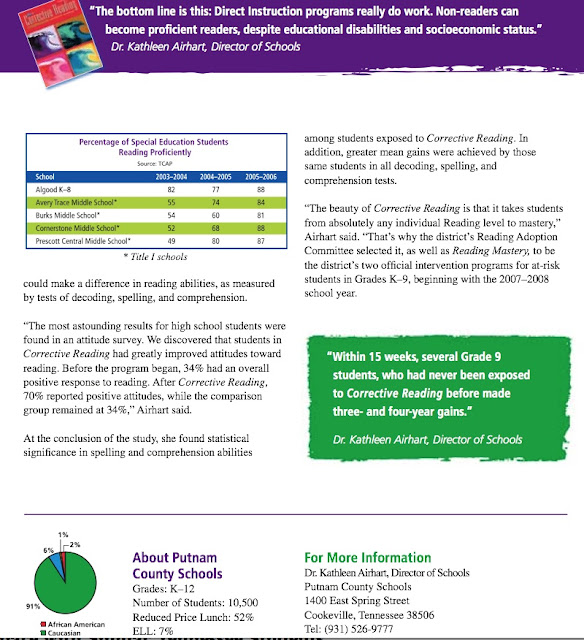 So with Dr. Airhart now in charge of enforcing this chain gang parrot system in all of Tennessee's schools, we can pretty much expect miracles, I guess.  Damn the poverty, full proficiency ahead!!

I decided to have a look to see if these miracles were reflected in Putnam County state reading scores.  And if a miracle took place, it surely was not witnessed generally in Putnam County, at either the lowest percentiles or the highest.  Not once and not over time. See below.

Could we be about to enter another era of big time fraudulent reading claims as an excuse to initiate lockdown learning in every Tennessee school?  Sounds like that could be what's required to put Tennessee, or at least Kevin Huffman, on the road of First to the Top.  But don't worry: the guys who made the economy work like it does today have all sort of miracles up their sleeves.