Will Haslam Continue to Lead TN Schools Down the Corporate Rabbit Hole?

As Jim "Gradgrind" McIntyre and his billionaire patron, Eli Broad, continue their school corporatization campaign in the eastern end of the state of Tennessee (now Ground Zero for corporate education reform), Gates Foundation stooges lead the assault in the western end with a new wish list of dysfunctional corporate charter schools.  In Memphis, local school officials have called a halt to more corporate welfare charters, pending a recommendation by the State Treasurer to be followed by a final decision by the State Board of Education in Nashville, where corporate lawyer and former member of the creepy Teach for America sits as Commissioner of Education.  Scary.

At stake are millions of dollars in desperately-needed public school funds that could be siphoned away from their intended end to fund segregated corporate charter schools that have no public oversight of budgeting or spending and no accountability in terms of treatment of children or teachers and no public venue for community input or concerns.

The sign below (across the street from McIntyre's office) indicates the level of school employee satisfaction with the Dickensian situation in Knoxville, with the officious McIntyre, as Knox Schools' version of Mr. Gradgrind, presides over a school board that seems more impressed with McIntyre's Business Roundtable connections than with the needs of parents, children, and school employees. 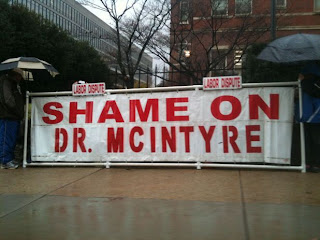 Here is a link to my guest column that the Knoxville News-Sentinel published recently in response to an earlier opinion piece by McIntyre, which reads like a marketing brochure he could have written for the Broadies during his supers' training academy stint.