The Revolution Has Begun 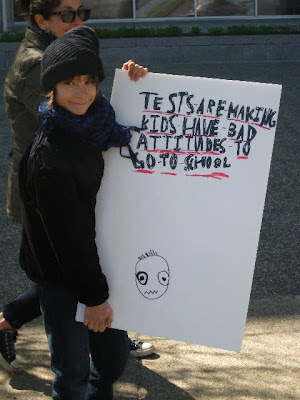 Every act of rebellion expresses a nostalgia for innocence and an appeal to the essence of being.
-- Albert Camus

Article From the Seattle Times

Disgusted with standardized tests, group of parents shunning them

A rebellion over standardized school testing in the Seattle Hill neighborhood southeast of Everett echoes a larger uprising around the country.

The folks in the sprawling suburban developments near Mill Creek and Snohomish insist they are usually rule-following types.

"We didn't go into this looking to start some big rebellion," says Michelle Purcell, a mom of three in the Seattle Hill neighborhood southeast of Everett.

But a rebellion it has become. One that echoes a larger uprising around the country.

The parents of 70 students (and counting) at one elementary school are refusing to have their kids take the standardized tests mandated by the feds under No Child Left Behind.

The no-test protest means that so far about 25 percent of the kids of testing age at Seattle Hill Elementary, in the Snohomish School District, won't be there when the school gives the Measurement of Student Progress (MSP) at the end of April, as required by federal law.

They'll be in another room, doing art or science projects.

Parents have the right to opt their kids out of the tests. There's no punishment, though the kids get a zero. Handfuls have opted out over the years, often at alternative schools. A few years back a Seattle science teacher refused to give the test, saying it was harmful to students.

But state officials say parents have never pulled their kids on this large a scale.

"We're kind of shocked at the size of it," said Nathan Olson, spokesman for the state superintendent of public instruction. "No Child Left Behind is still the law of the land."

Parents at Seattle Hill say budget cuts drove them to conclude the tests were a poor use of money and classroom time.

"The worst thing is I don't see any value in the results I get back," Purcell said.

This has been a longstanding problem with the MSP and its predecessor, the WASL. Kids take the tests in the spring, but nobody sees the results until fall — when kids have moved on to a different teacher.

Even the president of Seattle Hill's parent-teacher organization is pulling her fourth-grader.

"We are a state that does testing on steroids," says Angela Cohen. "I came to the conclusion we could find much better ways to spend that money."

The state spends $37.5 million yearly on the MSP and another $10 million on the high-school test for sophomores. The main point of this protest is to ask: Is it worth it?

At Seattle Hill, class sizes have ballooned up to 29, even in some of the younger grades. Parent volunteers come in to teach art. The school has been shut down seven half-days and one full day this year for teacher furloughs.

"We're not against testing," Purcell said. "But in the context of all the budget-cutting, we're saying: Can we at least spend the money on a more useful test?"

They're not the only ones asking. Texas — the birthplace of No Child Left Behind — was in the news last month when more than 100 school districts passed resolutions saying high-stakes standardized testing is "strangling" public schools. The schools commissioner there recently likened the "assessment and accountability regime" in education to the military-industrial complex.

It all began with good intentions. The tests were billed as a way to make sure every child meets basic standards, rather than being passed through the system and forgotten.

But mostly the tests are used to try to judge whether entire schools could be considered failing — and then restructured. They weren't designed as learning aids for individual kids.

The Seattle Hill parents are walking out just as this state is doubling down on standardized testing. We're about to tie the test scores to teacher evaluations as well. That may or may not lead to better teaching. But one thing is certain: Even more time and money will be spent focusing on those tests.

My hunch: What's happening at Seattle Hill is just the first of many cries from school parents that we've had enough.

Danny Westneat's column appears Wednesday and Sunday. Reach him at 206-464-2086 or dwestneat@seattletimes.com.